Organizing - before and after

Ready or not -- I'm as prepped as I can be for my first session of serger events in French. Yikes --- it's like a whole new language! OK -- so it is a whole new language. I remember so many things in French, but I never sewed in French, and my vocabulary of things sewing is well -- limited. What are tweezers called? (pinces) - what are those loopers called? (boucleur inférieur and boucleur supérieur and boucleur chaine). (Sorry -- I don't have time for the accents!)  I mean -- it's one thing to talk about a subject, and I could go on for hours about almost anything, but WHOA --- when you don't know the words -- that's a whole different story!

I think I'm ready -- my slide presentation is done, and my list of "cheat" words is written out. I've practiced it, and well -- it is what it is!

I'm not nearly as stressed as when I did the first French one way back in the fall, but it makes me get prepped way in advance! I just can't make up words!

I did a LOT of cutting yesterday, and I almost finished all the cutting needed to prep for the weekend classes. Hopefully, the sewing won't take too long and then throw the pictures into a presentation -- well, four different presentations. Yikes! I'll make it!

I had someone help with the technical parts of two documents that I need to get finished, and those came back yesterday, so this afternoon, I need to give them the once over and hopefully send them on their way today. I would really like to get that task off the list by the end of the day, so we'll see how that goes.

I sorted through the orphan block box and separated them into two piles: the brights and the muted. And I set aside some stuff to sew during the virtual retreat this weekend. Now -- how much will I get done? And I need to be working on my UFO project this month -- it's a big one, so that really should be my focus!

I would bet there are enough blocks for TWO lap quilts in this stack. Many of the blocks are NOT my blocks. I inherited them from someone else when I thought it was a good idea to rescue everything that came my way, and I've since learned that is NOT a good thing.

I also dug out the red in my barn quilt blocks. OK -- so what I bought wasn't that far off.

The new one will suffice for the little bits of red in the blocks, and I'm OK with that. The more pinkish one got put with the Tula Pink Butterfly and is already cut for one of the blocks we're doing this month.

I have a small group that I participate in for mixed media. Stuff that doesn't necessarily have to be a quilt. We play with loads of different things. OK -- so the rest of the group plays with crazy stuff, and I struggle just to get anything done.

This past month, the theme was to use something from the kitchen, and this is what they came up with. WAIT -- I can't share that with you until Monday. Sorry!

Here are some pictures of an interesting situation. We've all been tackling our sewing spaces, and we know how much of a pain it is to have to keep moving things around. Most of us have the space to store stuff if it is well organized.

This is what Linda did with her stuff.

She has a storage shed where she keeps her WELL-LABELED tubs of stuff. While the tubs were well labeled, they were just haphazardly placed in the shed.

So everything got moved out of the shed.

Out with the old hodgepodge of shelving units.

In with the new uniform shelving units.

And VOILA  --- a very organized space in which she will be able to find anything!!!

She was able to move quite a few tubs from the sewing space into the shed and look -- she even has spare room!!!
I love having some spare space on the shelves, and my view on that spare space is totally different than it used to be. I used to say -- OH -- I have space, I can buy more stuff. Now, my thoughts are -- that empty space looks awesome -- I want more empty space!!
Now the area around her long arm is free, so she can actually quilt on it. 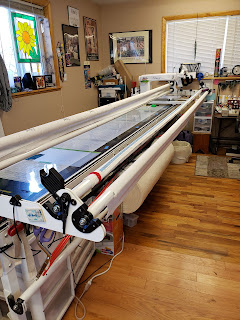 It took a lot of hours to make that happen, but wow -- it looks so amazing! So proud of you, Linda, for persevering and getting that done!

Thanks to Laura, who suggested looking at videos on YouTube that people have posted from Quiltcon! I never thought of that. Here's the first of several that I'll share this week. Wow -- some of these quilts are stunning. Look at the quilting -- some quilting is very detailed, others not so much. But looking at the pictures in this video just makes me rethink -- what exactly is a modern quilt? I know there are characteristics -- negative space, bold colors, improv, etc. but really? None of that is new, and none of that really separates these quilts from regular quilts.

It really is a sub-category of quilting, and we should just enjoy it and enjoy the fact that the younger generation is drawn to the modern world (even if it really isn't that modern!).

I promised I would no longer talk about the snow, but I have one last set of pictures to share with you.

See this huge mound of snow? It's not at the end of my dead-end street, but at another one near the house. This is how they used to do the snow on our street. You could then drive around the mound, and everything was fine.

This is what the backhoe driver did on our street. He shoved it all against the forest.

Now you would think that is a good thing. Well, not when he shoved it all onto the sidewalk and past the sidewalk. There is an entrance to the forest there and we are now walking INTO the forest itself in order to get to the path.

I had a peek at the path yesterday, and we opted to NOT walk in the forest. It was a sheer sheet of ice. Not very safe. The sidewalks in the morning were not fun, so we walked mostly on the street and on the multi-purpose path.

When I went out in the afternoon, most of the ice on the sidewalks had melted as we had sun. And oh my --- my neighbor was out shoveling the last of the ice off their sidewalk. They finally put salt on it to help melt the ice and then she shoveled the rest off. Now, why can't they do that on their own without being reminded by the city?
I might have to take Miss Murphy to the vet today. It appears that she has damaged her toenail and she is not happy. She keeps licking it -- I do have a cone of shame that I could use, but I'm "trusting" her to not touch the paw. I know it'll heal on its own, but I'm worried about it becoming infected. I could cut the nail, but I'm not sure that will help. I'll call them later today and see if they think it warrants a visit.
Let's just say that she not out running like an idiot in the backyard at the moment! Poor thing.
Well, that's it for today.
Don't forget the virtual retreat this weekend. Remember it's open to anyone and it's free. You can come and say HI or stay awhile and fire up your sewing machine and sew along with us. It's really just an open link to chat with like-minded people! Not scary at all.
Saturday, February 26  Starts at 6 PM   Eastern Time Zone
Join Zoom Meeting https://us02web.zoom.us/j/89254233911?pwd=VGQrTnFybW1HMWpleHA4M2Q2NGVwZz09 Meeting ID: 892 5423 3911 Passcode: 982797