A HUGE thank you to the Stratford Quilter's Guild for letting me be their guest speaker last night. It was so weird to be standing in front of a group of people and showing physical quilts! And I got to meet someone I hadn't seen in a LONG, LONG time, so we had a few minutes to catch up.  Hello Miriam - so good to see you last night. And I got to meet someone new. Well, not exactly new, since I met Pat on Zoom and feel like I know her very well. But I got to meet her in person! Good morning Pat!

I will say that it's a bit weird because there are no snacks, no coffee, nothing is laid out on the tables. It's a pretty austere meeting, but let me say that the show and tell by the members more than made up for that. The show and tell was incredible. I didn't take pictures; I didn't think it was my place. But the quilts and other projects were amazing. And it's nice to know that some other people are obsessed as well as myself!

So a huge thank you again -- that was a breath of fresh air to be back out in the real world!

I left a bit earlier than I needed to because I thought I could do a couple of geocaches in that area before I needed to be at the meeting. It was a gloomy day, and there was rain (or mist) on and off. I got partway there and realized that it would be too dark to geocache by when I arrived. So I stopped along the way, and I lucked out! Despite the mist (rain), the temperature was glorious. I didn't need an umbrella for my little adventure.

I found the first cache. And this is a FIRST for me. I've heard of these little caches, but I'd never seen one. Very clever.

And when you open up that "bolt," the logbook is inside. OK -- so I need to start taking the proper tools to make removing and replacing those log books a bit easier!

I was in a beautiful spot that I'd never been to before. I have been to New Hamburg before, but I'd never been to this park. I decided to see what else was close by. OH -- there's an Adventure Lab (part of geocaching and is like a bit of a treasure hunt). OH MY -- it started exactly where I was standing. How could I say no to that one?

There is a series of murals in New Hamburg, and I was off to tour them. The following two pictures are the ones on the bandstand.

These murals depict all the activities that take place in this park. Well, have a look at the first one on the left.

YES -- that's a quilt! This is where the Mennonite Relief Sale happens. I've never been to that event, but they have raised many, many dollars for their cause. That was so cool to bump into this. The wonders of geocaching! You never know where you are going to end up!

So two of the five questions were in this area. Then it was time to walk. I had to walk downtown to find three more murals. All very interesting.

The next thing I knew, I was beside the river, so I had to stroll over to have a look. WOW  -- this was a beautiful spot.

This is the Nith River.

By now, I had answered all five questions, and I was done! I had enough points for the month!! And right now, that's my goal -- reach the number of points necessary to get the badge for the month and leave the rest for the following month. Note the time -- it was 5 PM, and it was too dark to do anything else, so I headed back to the car.

On my way back, I "had" to walk by the quilt store in New Hamburg. Even though it was open, I didn't go in. I had no money and no mask, so I couldn't go in even if I wanted to. That's the thing about the mask -- sometimes, you might just pop in to browse, but no - you need to make sure you have a mask! That's an excellent way to save money!

As I was packing up the suitcases in the afternoon, I discovered something, and I've no idea how it got there. Wait a minute! There's a ruler in the pocket of this suitcase. I'm not missing any rulers, and it's a 6" by 14", which I've never owned. Does it have a label? Have I been hoarding someone's ruler? Have I become my mother?

There WAS a label on the ruler. But what a shock when I saw the name.
It belongs to the woman who has passed, and I made the Double Wedding Ring quilt for her daughter. Seriously??? Her daughter had given me most of Paula's tools when cleaning out her mother's house. Most of the tools were donated to others, but for whatever reason, this ruler got stuck in my suitcase. I have zero memory of this.
I meant to take a better picture of my two giant suitcases, but here they were as I was packing up.
OK -- so I haven't had to lug a HUGE and HEAVY suitcase in a while. How does one load those giants in the car? Oh yes -- an extra lift with the leg helps!
Before I went anywhere yesterday, I had to fill up my car as I was pretty much driving on fumes. Good grief -- this is the MOST I've ever put in my car and the most expensive! Well, I must have paid more than that at some point because while our gas is 141.9 a liter, it's been more costly in the past.

Another reason I left early yesterday was to not get stuck in the traffic. There are two sections of the 401 that they are widening, and the construction is totally crazy. They were still working last night when I passed at 10 PM. The sad thing about this is that it doesn't matter how many lanes of traffic there are; if drivers do not know how to merge and drive properly, there will always be traffic issues. Yes - I get that volume can be troublesome, but it's a lot due to the drivers!
And what was with the police last night? As I got off the highway and approached an underpass on the major street to get home, there were at least a dozen if not more police cars on both sides of the road. Lights ablaze! I was going to turn around, but then they seemed to be letting people through. They were checking some cars and not others. Hmmm..............
When I did finally arrive home, I thought - oh shoot, I didn't feel my FitBit buzz at my daily goal for the day (11.5 KM), and I did not have time for a real walk. Yes - I went geocaching, but that wasn't a very long walk, or was it? I was shocked when I looked at my Fitbit to see that I had clocked almost 14 KM in the day. 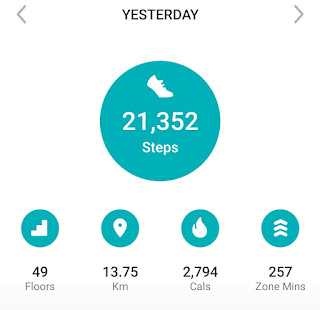 I guess that was all the running around packing and prepping that I had done during the day! Yikes!!!
Well, that's good. And now I'm just over 300 KM to get to Signal Hill in St. John's. Wow -- the days are marching fast!!!
So a bit of sad news in the quilt world. Does anyone remember the Infinite Variety: Three Generations of Red and White Quilts held in New York City in 2011?    It was a gift to Joanna S. Rose from her husband. He arranged to have her entire collection of red and white quilts hung in a FREE show. I kick myself that I never got my butt to NYC to see this. That was a once-in-a-lifetime show. Well, she apparently has passed.  You can read all about her life. That's very sad. I did buy the book, but it's not the same as having been to that show.
Well, that's it for me. I have three presentations today, and all of them are ready to go! I polished off the last one this morning. One day at a time -- that's how I'm rolling this week and next!
Have a super day!!
Ciao!!!
Posted by Elaine at 7:20 AM