I caved! I had to watch the other two episodes of The Great Canadian Baking Show. I am a junky for that kind of thing, and since I cannot control myself very well, I try to refrain from getting hooked! Now when is Episode 5 playing?

I cringe at the stress level they must experience for the duration of each challenge. I mean, some of the contestants are making stuff they've never heard of! The show was taped in the summer in a non-air-conditioned tent, so you can imagine the challenge of working with some of the ingredients!

Then I went downstairs to my press cooker, and I swear I felt just like them as I fussed with sample making that needed to be done for a presentation! Same stress, different material! I think my life is just one big challenge - each day brings something new!

I dare not look at my calendar! This month is a crazy situation; however, I have two days booked off for some fun time! There will be no watching shows next week as I have a ton of prep work to do! Thankfully, the craziness ends at the end of the month, and things will be calm for a week or two.

My Zoom account is getting a good workout! I had a panic moment last night on Zoom, and thankfully someone came to my rescue. I decided to get cute and use the LASER POINTER that you find on the Zoom screen. Perfect - it's easier to show up what's happening on the screen. However, it doesn't function like a mouse and wouldn't start the videos! NO!!!! Then someone suggested that it's a toggle switch -- toggle on and toggle off. Yep -- that worked!

Sometimes, your brain just doesn't function when you're frazzled. I swear I tried that, but I think I had selected another tool. Lesson learned - do not try something new in the middle of a presentation!

I've got three presentations today, so there won't be a lot of extra work getting done, but there are things that need to be finished today so, between presentations, I'll be doing that.

I see people posting stuff on Instagram and getting so excited because it's a new technique they've learned or that they have "created." Hmm -- NOTHING is new - maybe a new way to present it, a new slant, but nothing is new! It's interesting as the new quilters discover these techniques, yet the methods/styles have been around forever! I had tagged a couple of pictures that I can't find, but I will share them with you. It's hilarious! I guess that's why we see so much in our world reworked every generation.

But what a hoot with this picture. This is one of the hosts (Alan Shane Lewis) of the Great Canadian Baking Show. Does anyone recognize that shirt?

Yep -- it reminds me of The Big Shirt by Cindy Taylor Oates. This pattern is ancient! I did make one shirt, and I don't think I've ever worn it. Well, it's back in vogue - I must dig it out and wear it! I must find it first! I think some topstitching needed to be completed!!

I think that's hilarious. Now I know that it's not exactly rocket science to color block a shirt, but it's a pretty similar style! I need to find my shirt now to see if I serged the seams.

I had a couple of other examples, but as mentioned, the photos seem to be missing. I'll try to locate them for another day, and I know you're going to get a kick out of them!!!

Well, here's a piece of good news! There is a new quilt store and retreat house being constructed in Paris, Ontario!

I've already paid to be first in line for the retreat! Just kidding - that is not true, but we hope to be one of the first groups to visit the house. Maybe we can be testers!!

I'm not sure what coming soon means as they haven't broken ground for the store's construction. The house already exists. Let's keep our fingers crossed that it will be up and running by the end of 2022. You know how long construction is taking these days!!

It's like the house a couple of streets over. They ripped the bricks off part of the front to replace them, and there it has sat. It's a couple of weeks now, and no progress. I would NOT want to be the owner. They seem to be having significant issues with what? Product? Insurance company? Who knows, but it's been a long slow process. It would have been faster to rip the house down and rebuild it!

At least, they seem to have the tarp somewhat secured for the moment. At one point, the tarp was flapping in the wind, and you could see right into the house!
So I'm getting much better at swapping out my running shoes when they break down, but I also put a lot of KM on my house shoes. I bought a new pair the other day, and today I'm breaking them in! I like slippers with stiff soles on them, and so far, they are comfy!
Let's not forget that today is Remembrance Day in Canada. Wear your poppy proudly and take a moment to remember the men and women who sacrificed so much for our freedom. Our life would be pretty different without their contribution!

OH OH OH --- I remembered that I saved that Instagram photo on my phone, and I found it. So this is another NEW trend. Oh my   --- this was HUGE when I started quilting, and I thought it had disappeared for good. But no - this trend is back. So get out your orphan quilt blocks and decorate a sweatshirt!!! 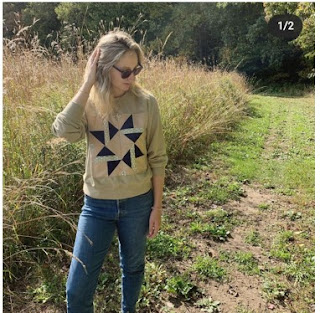 On that note, I'd better get myself moving. Lots of stuff to do today and no time to waste!!