I smell a skunk! I think someone got hit this morning. Thankfully both girls are in the house as I'm not sure either of them would be smart enough to run!

So there's good news and bad news today. The good news is this.

Yep - that's where the Long Time Gone quilt was. And I'm happy to report that it's all in one piece! Yahoo!!!! I'm pretty excited. No, actually, it's kind of anti-climatic. I'm just relieved that it's together. I have one more thing to do to it, and then I'll be ready for the weekend. Then it's about the border, but that's the topic of discussion for the weekend.

Every day (or so it seems), there's another finished top (minus borders) on the Facebook group. I can't wait to assemble the pictures to see how many we have for our show and tell. It's going to be amazing. But the final reveal isn't until June, so there's still time for everyone to get it done.

I have to laugh when I look at those blocks on the right-hand side. I made two orange and white blocks similar to a log cabin block. That was going to be my pandemic quilt. I would make a quilt with all my free time during the lockdown. HA!!!  What free time? I'm busier than I ever was!!

The bad news is that after spending time with Microsoft to delete that file and I've reinstalled the software that it still doesn't work. Now, why is that? I've got to go to their support group and see what needs to be done. It literally stopped working one day. Now, why? And why me? Thankfully, I have that software on my desktop computer. But here's the weird thing - last week, I took the computer downstairs, and the camera wouldn't work in Zoom. I tried the camera this morning, and it seems to work just fine. So I'll take it downstairs again today, and hopefully, everything works. The show must go on!!!

If only there was an easy way to figure things out, but there are so many things connected to each other that it's next to impossible to figure out. Or it takes a long time!

We went back to the dog park yesterday. But I'm not going every day - I don't get nearly as many steps in as when I walk them separately. They are both well behaved at the park, so that's a good thing. I dare not take Murphy's ball as she is VERY possessive of it and best to keep those emotions out of the dog park.

BUT - they were deterred by the hot vinegar for one day. And now they are back in the corner. I caught Lexi just lying there and watching. Watching what? I've checked both sides of the fence and didn't see anything. I'll be checking again. Murphy, in particular, will not leave it alone. Although now I have a lot of bricks and stuff blocking the corner, so she's better.

The June/July issue of Quick + Easy Quilts (Fons and Porter) is all about memories. I was fortunate enough to have a quilt in that issue. I made a memory quilt for my parent's 50th anniversary back in 2004. My brother got people to sign squares of fabric, and I made the quilt top.

For whatever reason, we had people sign more squares at the anniversary party, and I was supposed to make another quilt for them. The squares have been languishing in the UFO pile for years. When I saw the submission request, I jumped and was lucky to be accepted. Hence, I killed two birds with one stone. One more UFO got completed, and I got the quilt published.

There is a closeup of one of the blocks, and it was my Aunt (my Mom's sister) and Uncle. How cool was that!!! I mean that it wasn't a random person who attended. 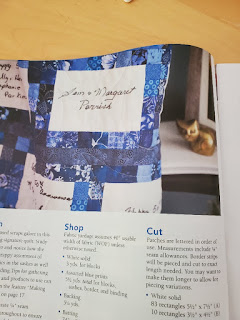 So check it out!!! The first quilt was made in green and yellow as they are colors on the Saskatchewan flag. I don't think my Dad liked the colors, so he asked that this one be made in blue. I had made a note of that when I filed everything away. They haven't seen the quilt or the magazine article. I mailed a copy to them yesterday. The only thing they know is that I asked for a photo of the original quilt a couple of months ago.
The original quilt was made in 2004 (SEVENTEEN years ago), and these signatures are from that same year. When I was making the quilt, I realized that so many of the people who signed the quilt are no longer around. That's why I LOVE signature quilts - it's a great way to have a small part of many people in one place. I think I've mentioned the quilt I spotted one day, years ago, that had my grandparents' names on it, as well as many of their friends. I'd love to get my hands on that quilt. Perhaps I should offer to buy it from the current owner.
Then I had a laugh as my cousin sent me a picture that had been posted on a Facebook group about old times in Saskatchewan. And there were my parents!! Perhaps, I shouldn't say OLD.

Oh my --- I don't know what year this was, but I'm guessing that it was the 1980's. God - it could even be in the '70s. That's my Mom in the purple pants - she looks so YOUNG. And my dad in the brown pants behind her. God - he also looks so young. Well, that was many years ago, and I know that I looked much younger myself!!!
And what's even funnier is that my first boyfriend is also in the picture. OH MY GOD!!!  He's the goofy looking one second from the left in the front row. And his Dad is standing beside my Dad. Well - that photo brings back lots of memories. I was NOT at this event! It was a CB Club event - I think that was what my cousin said.
CB as in Citizen Band radio - you know, "breaker, breaker," "10-4", "what's your 20?", and all that stuff. Yes -- we all have bizarre things in our past!!
I have to cut more blue squares for my Snail's Trail blocks, so I couldn't sew them this morning as I finished my Long Time Gone quilt, but I grabbed something that was already cut - other parts of my All in a Row quilt, and I worked on that this morning. It was very nice to have a wee change!!!
So on my virtual walk on the Appalachian Trail, I'm getting close to the New Jersey/New York state line, which we follow for a bit. I always click with the yellow Google guy to see what's been mapped near where I am. Seriously? The Google car went down roads like this?? NO -- the Google car did NOT go down the Appalachian Trail!

I have to say that I'm shocked. I would never have thought they would care about these roads, but I guess when that's all you have in the area for roads, they all get mapped!!

One great presentation yesterday and a super interesting class. I hope the students are getting stuff from the class! It's sometimes hard to get feedback on Zoom. Had to do a bit of rearranging as time zones took a toll on my calendar, but all is OK. I hate when that happens, and I didn't catch it. One writing assignment is done (except to add one last picture), and time to work on number two. I'm in good shape workwise, and that feels great. The thing is to try and keep up!!!

Two presentations lined up for today, and the giant quilt is loaded on the long arm for this afternoon. So that's another busy day planned. And it's going to be NICE outside today. It's been cold lately.

Well - off to get the morning walks done and then onto the day!! I know - I haven't given you a decluttering task in a couple of days. Are you even doing them? Or are you like me and so far behind? If you have a filing cabinet - it's time to tackle that! Grab one or two file folders and go through them. Be ruthless - do you really need those electrical bills from 20 years ago? Think of your kids or whoever will empty your house when you are gone!!!!