What a crazy day! I swear you can never be done with sample making! Just when you think you're done, you think of another sample to make! I've got more to make later this week, but for now, I'm set.

Oh my -- I LOVE Monday sewing. I was a bit distracted as I made those samples and took pictures and videos. But it didn't matter; we chatted about everything and anything. I feel so connected to these ladies! They are my family! And it's a great way to do some mindless sewing, although it was a little bit harder with the sample making!

Today, we're going to continue with the UFO show and tell. I have to tell you that I'm impressed with this group! Some are moving, some have had major family issues, some people are working full-time and still keep plugging away at those UFOs. Now that's dedication!!! It would be easy to set things aside, but that's the beauty of each person setting their own goal. They know how much time they have.

Liz got the binding on this applique quilt which has already been gifted to her granddaughter! The baby approves!!

Lynn got two cushion covers finished. She usually designs something that correlates to the quilt that will get stored inside. The top one is for Summer Moon.
And the second one is for her Celebration quilt. That's the last of her big quilts. OH MY - that won't happen at my house for MANY years to come.
Morgan is working on some blocks with panel bits as the centers. I LOVE what she's done. I think I have that same panel, and I'm tempted! But NO - don't start a new project as I don't have time.
Nancy is another one who collected a ton of the Celtic Stonehenge kits. Her goal was to finish six of the blocks, and six of them are done!

Hmm - some of those blocks are very nice. NO - just say no!
Rose is working on a Block of the Month from a few years ago. Her goal was to complete one block, and it's done! I have to laugh as some of these projects that we're working on were hosted by stores that have long since disappeared. This one was from JillyBean's Pride in Oakville, if anyone remembers that store.
I'm not going to admit to how many of these patterns or fabric that I also own. Not going to happen! My focus is fairly narrow these days. OK - so it's not, but it's pretty narrow compared to what I used to be.
Sharon has got her gingerbread quilt top together, minus the borders. OH MY GOSH -- these are adorable blocks. They are hand embroidered and then crayoned in. She "cheated" and had her granddaughter do the crayoning several years ago. Who cares! That adds some sentimental value to the quilt, and it's now so close to completion.
Sheila has gone crazy. She was able to quilt this quilt made with "old" fabric. It's now on the couch, so Hutch (the dog) has a place to sleep. Do NOT let Murphy hear that. She'll be begging for her own quilt.
In case you're wondering why it's called the "old" fabric quilt, it's from those pretty (and I use that term loosely) calicos from way back when!!
The binding is now on her MoonGlow quilt. That's two HUGE quilts done!
And she quilted this wall hanging, and it's hanging up. Just get 'er done!!! Isn't this amazing? 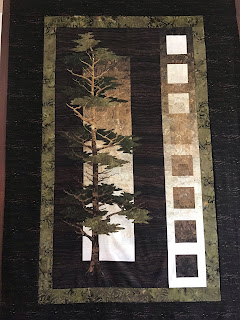 Look at her hanging system for the quilts. There's a dowel inside the crown molding. I think that's a brilliant idea.

Susan cleared up several small projects this month. Not one, not two, but THREE table runners. They are quilted and bound!!!

Suzi is going gangbusters with her Aunt Millies' Garden. Do you see what's happening here? Suzi started working on her Aunt Millie's Garden, and that got Linda W fired up, and she started working on hers. They were in the same class many years ago!!! How hilarious is that? That class was held at Cockadoodle Quilts, and sadly, Joanne and the shop are no longer with us.
And Suzi is getting her Farm Girl Vintage together. This is NOT how she planned it to start with, but she ended up with this. I LOVE the two big blocks in there!!!

And there you have it - another great Show and Tell from the UFO group for May. Each person has given me their assignment for next month, and I feel pretty confident that they'll get them completed. Wow!!!!!  Even myself, if you don't need to be accountable to someone for working on a project, it's easy to let it slide. I've got a big assignment this month - well, not huge, but it's going to take time, so I hope to start working on that next Monday. No more sample-making on Monday. It was a bit distracting.

One more class and one presentation today. It's another busy week. That quilt is still on the long arm; there's a ton of writing to do and another busy weekend with classes coming up! And the weather is super nice!!! Oh well - I'll go for my walks and perhaps sneak outside for a few extra minutes here and there. I could write outside, so that may be where I end up. I need both computers to be attached to my external hard disk, which isn't possible. I need an IT guy who can set up a server for my computers!!!

Don't forget the Virtual Retreat this weekend. Yikes -- it's going to be a nice day, but you can still drop in and say HI. I have a lot of work to do, so I think it'll be a good opportunity to stay in the basement, stay cool and get a lot of work done. I'll be posting the links later this week.

On that note, I'm out of here!!! It's too nice to have a decluttering task today. But what about the weeds in your garden? I whacked a few out yesterday and will probably do the same today.