Practice what you preach

OH MY GOSH!!!!!   We had so much fun at the Virtual Retreat. And I accomplished so much - way more than I normally would. And can you believe - I didn't shut the call down until 10:30 last night. I'm dead serious -- we had a NORMAL conversation, the same as if we were in the room together. The best part? There was me, someone from Ottawa, and two others in northerly regions of Ontario. Totally distanced apart, and we would NEVER be able to do that in person. Am I hooked on Zoom? Oh, you bet! What I love is that even if your friends move away, you can still stay connected.

Here's the best news - we had so much fun that we're going to do it this coming weekend! I was supposed to be going away for a sewing retreat this weekend. That's not happening, so technically, I have five free days!!! I do have a couple of things scheduled, but I'm going to host another retreat. I'm going to change up the hours a wee bit. I'll do Saturday evening (6:30 - whatever) and Sunday - it might just start a wee bit later on Sunday. I have to give the timing a bit of thought.

Anyway - that's your heads up - we have so much fun. Nina from Germany stopped by, as well as a couple of people from Western Canada. Thanks to everyone who stopped by! And YES -- we did solve the world's problems!

On the weekend, I gave a talk on UFOs - what they are, how to deal with them, and how to get motivated to get them done or deal with them. I figured I'd better practice what I preach. So yesterday, I worked on UFOs.

I'm happy to report that the second quilt from that mystery quilt debacle is now done. This quilt is 82" square. The other one is about 74" by 80". All the components were supposed to be in the SAME quilt - that would have been gigantic!!! I'm happy that I made two quilts.

I had a big chunk of this fabric, and I made the backings for the two quilts, the border for both, as well as the bindings, and I still had this much leftover (it's doubled up in the photo). That was a good feeling to not have to scrounge around for fabric.

I forgot to take a picture of the backing, binding, and top, but trust me - it's done!!!

Then it was time to move to something else. I have two UFOs to work on this month, and I figured I'd better get motivated and start to work on the second one now instead of the night before. I should take a picture of the pattern, but it's a double wedding ring quilt with star points. It's paper-pieced. My job this month is to get all the components assembled. Here's what one block looks like. It's gorgeous.

I have this same quilt to make for a student that was in my class. She passed away a couple of years ago, and her daughter asked me to finish the quilt. I decided to get that one organized first.

After what I accomplished yesterday, I was able to pare it down to four containers. Two containers hold the bits that are ready to be assembled into blocks. The other two hold partially completed units or extra papers for paper-piecing the blocks or extra fabric.

And I was able to repurpose both containers, moving a couple of my other UFOS were in plastic or paper bags, so they stack a whole lot neater on the shelf.

OK - besides organizing it all (which in itself was a huge accomplishment, and I was thrilled), this is what else I accomplished with that project. I finished all the melons. Let me rephrase that - I have no idea how many of these units I need. I'm making the project larger than the pattern but not quite as large as Paula had intended to go. I'm hoping there are enough pieces to make a second quilt that I'll donate. But I'm not into counting all these pieces. I literally sewed until I ran out of the fabric that she had cut.

Yes - -Paula had cut a LOT of fabric but didn't have a chance to get it stitched up. Not only did I finish these melons, but I got them trimmed. That was thanks to a few lingerers on the call last night. We chatted about travel, and well, before I knew it, those pieces were trimmed.

Once I finished sewing the melons, I figured I might as well keep working on this project. It's not that it's confusing, but there are many components, and she used different colors for the background, so I decided to forge ahead.

I made some of these units.

And I made some of these units.

I did get some of them trimmed this morning, but that will be a job for Monday sewing. And I have about 50??? more units (a few of each color of the star points) to sew. Then I'll have run out of all fabrics that she cut.

I was curious to see what the quilt would look like, so I threw a couple of the edge blocks on the wall.

WOW -- I know that looks a wee bit of a mess, but I LOVE the colors. It's quite beautiful in real life. I've decided to work on that this morning, so I laid out the blocks so they would be ready to sew once the components are done. Once the blocks are together, I'll have a better idea of where I stand on what needs to be done next.

And I must NOT forget that I need to work on the components for my version. The arcs are done, but the other pieces are not. Fortunately, they don't take that long to assemble, but we all know that everything takes way longer than we think it will.

And one more Snail's Trail block is done. One unit is partially together, so I'm super close and maybe today's the day that it'll get done!!!

I was having so much fun yesterday that I didn't even go for that second walk. WHAT?? That's unheard of!! I'll be making up a bit of the lost mileage this week. It's not that I'm behind - I'm slightly ahead of the game, but if I don't keep up the pace, I'll never catch up. It's an aggressive goal, and barring major injury, I WILL NOT let that goal escape me. It's important to me, so I'll walk through sleet, rain, snow, heat, and cold, but it seems that a Virtual Retreat will stop me cold!!

Have you checked the surface of your car lately? Mine is covered with a thin film of crap. At first, I thought it was dust, but it's green - POLLEN!!! My car looks like it's been sitting abandoned for years. In fact, I drove it the most this past week since the pandemic started! 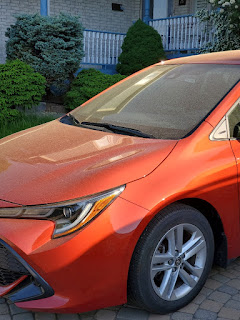 I was so excited at my progress on that UFO that I couldn't stop last night. And I was excited to get started at it again this morning, so I was up bright and early. I'm just as excited as if I started a brand new project. And that's one of the key things with your UFOs. If they don't excite you, you really need to get rid of it - sell, trade, giveaway, repurpose, but you NEED to do something about it. Your family will love you when they have to clean out your sewing space.
I need to keep the momentum going on this project - it will not get done overnight. It's like my walking goal - it's a priority, and it WILL get done. Both of them!!
So that's exciting! I have more stuff that I pulled out to work on, but I'll save that for another day to share with you.
Om that note, I've got to get rolling. I got some urgent e-mail done yesterday, but there are still a few more things to do before starting sewing at 10 AM.
Have a super day!!!
Ciao!!!!