OMG --- I LOVE my blog. That's a pretty narcissistic comment, but seriously -- I just went to search for something, and well, each of the posts has something cool that I remember. OK -- that's not exactly true as some days are boring as ever, but other days - well!

But the underlying theme remains the same! Here's the link to a post from January 7, 2012. You'll see why I'm sending you there in one second. But the title of that post is Learning Never Stops. That's hilarious! And it's nice to see that I'm true to myself, not only in the learning aspect but in my favorite color.

That was the day I visited the Patagonia store and fell in love with my down sweater. I'm not sure when I actually found the right color and purchased it, but let's just say that the jacket is now 10 years old.

There's the label!
I've worn that jacket everywhere - I wore it in the evening or on cool days on my bike trip across Canada and other places. It's super lightweight, and it's warm! It packs up into a tiny ball, so great for all kinds of travel. I just watched the video with all the features -- oh my -- I learned a few things about the jacket!
It's dirty, and DH would LOVE for me to replace the jacket. I've tried to wash it, but that dirt is engrained in it. I'm good with that.
OK -- so why am I telling you all this? Because the zipper has failed! I know -- after 10 years of heavy use, the zipper has become very unreliable. I'm devastated and won't give the jacket up!
I've looked at purchasing a new jacket -- the colors are bland. I've thought about replacing the zipper myself -- my Monday sewing friends all poopooed that idea as it's quite the job to do so. I even found a replacement zipper online! They still poopooed the idea.
They suggested that I have someone else fix the zipper, and in the afternoon, I went to the mall to see what it would cost. $50!!!! Yikes!! That's a lot of money.
And there's this label in the jacket that makes me NOT want to throw the jacket away. 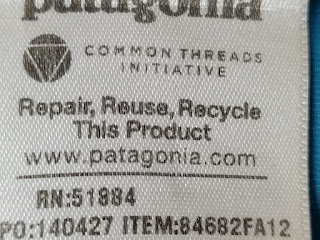 There used to be a store in Toronto, but I couldn't find it on the internet and only found three stores out west. So I called the one in Victoria. OH -- MY  --- GOODNESS. When I explained my problem to the guy and lamented that they didn't have any bright colors, he said PATAGONIA stands behind all their products and will fix it for FREE!!!!!
Seriously???? I could have kissed him if he were in front of me. He also explained how to find the Toronto store. Apparently, the ones out west are franchises, and the Toronto store is the corporate store. I called them, and YEP, they will fix the zipper for free. All I need to do is make sure the jacket is clean and dry and then take it in. WOW!!!!!
There are a few holes on the inside of the elbows, and some down has escaped -- I don't know if they can fix that, but I don't care. I'm going to get my jacket fixed! I will schedule a day and go downtown to visit the store. I've been thinking of purchasing some other outdoor gear, and well - I will certainly pay the price to buy from Patagonia. It would cost me $300 to replace the jacket, and I'll spend that money to buy something else.
And is $300 expensive to pay for a jacket? Well, let's see --- I didn't pay $300 when I originally bought it. Let's say that I paid $200. $200 over 10 years?? That is $20 a year to own that jacket. And now that it needs repair and they will fix it for free?? I think I owe Patagonia some money! That was a very worthwhile investment. In a heartbeat, I WILL buy my next jacket from them.
I thought they would be encouraging me to buy a new one since the jacket is 10 years old. Nope -- For them, this is NOT an old jacket! My kind of company! And the reviews on these down jackets are fantastic. It weighs about 13.1 ounces -- something that is very important if you are backpacking, which I am not, but I love how lightweight it is!
DH will NOT be happy that I can get the jacket fixed! He's not quite as environmentally conscious as I am!
So if you did venture to that Jan 2012 blog post, it was all about a trip downtown that M and I made to the ROM to view a clothing exhibit and a visit to the textile district in Toronto. Fond memories!!
I don't seem to get much sewing done during Monday sewing, but I sure get a lot done early in the morning by myself. I hate diagonal seams on quilts as they seem to go on forever!!!
But LOOK -- the top, minus the borders, is done!!!

Needless to say, I'm pretty excited about that!

Yep -- it's been so much excitement the last couple of days, I can barely control myself! But now reality is kicking in, and it's time to get down to some serious work. More writing, homework assignments to sew up, and well, it's going to be heads-down the entire week!

But I'm OK with that.

The other night I was sitting in the living room reading, and the first quilt I made when I got serious about quilting was sitting there. I had to laugh when I looked at the corners of the binding.

OH MY GOSH -- some of those look like the toes on elf shoes!! Look at the hooks on them! I had NO idea what I was doing.

And now, look at the binding on my latest quilt.

Yep -- quite a bit of difference, to say the least.
We all know that the prices of EVERYTHING are going up. I came across this article about batting the other day.
When I was at the mall yesterday looking for a couple of things and getting a quote on my zipper, I thought I'd check out the irons at Wal-Mart. Not that I need a new one, but we've had several discussions the last couple of Mondays, and I thought I'd check to see what was on the shelves.
Good gosh --- what is going on with the irons??? The shelves were BARE, except for ONE iron. Quilters??? Sheet ironers?? Someone is hoarding irons!
I also found the latest issue for QUILTCON -- that was the modern quilt show that happened in February. Since I didn't get to go -- I bought the magazine to read all about the latest trends, etc. It's published BEFORE Quiltcon happens, so it's not directly about the show, but close enough.

I haven't seen any coyotes in a long time, although I have seen a fox from time to time. I actually thought the coyotes might have moved on, apparently NOT. They were howling their heads off at 3:30 this morning. And I say THEY -- there was definitely more than one -- it sounded like two or three at least. I'm not sure what they were chatting about -- it didn't last long. But something significant happened.

Now that I think about it -- the rabbits probably think they are safer INSIDE our fence with our two goofy dogs than outside with the hungry coyotes!!

Lots to sew, e-mails to answer, things to create, a presentation to do. It's going to be a busy day!!!