The sun was out and so were the bugs. Because it was sunny - I loaded up with sunscreen.  I was the first one to leave this morning.  A couple of others were getting ready to leave, but I guess they hung back so I was on my own. I was very apprehensive about the bike computer and had the spare with me as well as electrical tape in the event I needed to attach it to the handlebars.  Of course - it worked like a charm the entire day.   There is still something wrong with it - same problem as last year which of course - I never followed up on.  OK - when I get back - first thing - call Garmin and tell them what a piece of crap this bike computer is.  And it was NOT cheap!

So I am out riding, slathered with sunscreen. And there are BUGS.  Those dratted little things that kind of cloud along the side of the road. But if you moved your head slightly - you could miss them. Needless to say - I am sure if anyone saw me - they would wonder why I was bobbing and weaving my head so much.  But I HATE having stuff touch my face - in particular BUGS!!!!!   ICK.

My first stop was in Picton which was 50 K into the day.  Since I had started so early, I was afraid the shop wouldn't be open until 10 AM. But when I arrived around 9:20 - the store was OPEN.   Opened at 9 AM.   Awesome.   I am sure the owner had a bit of a start as a sweaty cyclist comes in to the shop. The row is really cute - autumn and I caved and bought the kit as well.  I had to eat something from my bag in order to find room for the kit.

Back on the road - there was a bit of  a head wind - of course now that I have joined the tour - there is wind!   But my legs were feeling really strong today and so it wasn't really an issue.

There was a small ferry that we had to take to get off the "almost island" in that area.  I was the only one that caught the 10:15 ferry.  I didn't know if anyone had passed me while I was in the quilt store.

I didn't stop to take many pictures along the way.  Lots of scenery but I have seen it before (oh - that sounds really bad) and well - it was just a nice day to ride. I caught up to Craig and Alex just before Bath and we stopped at the local market to buy chocolate milk - did you know that you can buy DARK chocolate milk which is 2%?   I didn't have any - it wasn't in the half litre size.   After a quick break - back on the road.  I left Craig and Alex behind as I moved onto Kingston and the second quilt store.  It was about 4 or 5 KM to get to the store on a VERY busy street, but I managed to find it no problem  I think this store was even more surprised because the first thing I asked was to use the wash room.   A very sweaty cyclist who asks for the wash room???   I wasn't going to buy the kit, but I had to - the row was so cute and already cut out.   A bit more cramming and it was in the bag.  I am not even looking at anything in the stores so I don't get tempted.

I had planned a different route to catch back up to the cycle route and it worked like a charm except then I didn't know how many KM to ride before the next turn,  AH - but my memory recognized places along the way and I was fine. I stopped in Kingston at White Mountain and had ice cream in honour of Myra - we stopped there last year - it was her favourite ice cream haunt when she lived around this area.

Through Kingston and then the countdown begins.  After that many hours on the road - you start to play games with yourself to get through the KM.   How fast can I do 5 KM. How many KM to the next town.  Oh yes - you play games with yourself!    And you think of stuff - but then you don't.  I think of things and then go - oh yes - I don't have to worry about that so I don't think about it.  It really is a great experience to spend that much time and not worry about a single thing!!!!

I arrived in camp - shortly after Craig and Alex. Actually it was good timing - they had just finished unloading the truck. Got the tent set up and with the hot hot sun - everything is dry again!   Yeah!!!!!!    Then Alan Metcalfe came to camp and we had a good visit.

Then it was time to get rid of the bugs, the dirt and the sweat.  My hair was so thick with GOOP - I wasn't sure it was ever going to come clean.

Yes - I think I am back in the "spin" of things.   I am loving the trip and never got lost in any of the times I have been on my own.   I might ride by myself more often!!! 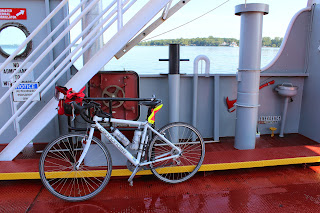 On the ferry at Grafton (I think) 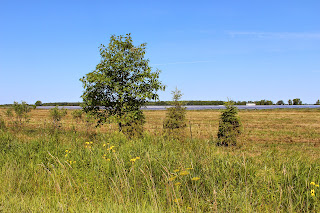 A massive field of solar panels
Posted by Elaine at 8:26 PM