Had a great breakfast in the cafeteria and got the truck loaded and then we were off.  Kirk decided to ride with me and we started off on the bike path along the Rideau Canal. I was in the lead and felt really strong.  The average speed for the day was 24.3.   I know - what the heck happened????

Well the road was pretty flat and a bit of wind in all directions. Anyway - we made excellent time. I didn't stop to take pictures much along the way.

The first stop of the day was in Orleans. I wasn't in too much of a hurry as the first stop was Quilty Pleasures in Orleans which was only 25 KM from the University. We arrived at the store at about 9:05.  OK - the store opens at 9:30 and I decided to wait. Kirk waited with me. Then I saw the owner arrive in her little smart car - why did we know that?  Her license plate was QUILTYP.   She had arrived at 9:25.  I approached her as she walked to the store and told her that I was there to pick up the Row by Row.  Well - the store isn't OPEN yet so I wasn't allowed in but she went in and got the pattern for me.  I loaded it in my handlebar bag and no danger of being tempted to buy anything.  Then we were back on the road.

We kept running into Craig and Alec. They passed us while we waited for the quilt store to open and then caught up to them on the road.

Stopped in Montebello for lunch - same place that Neil and I stopped last year.  I figure if there are motorcyclists eating there - it has to be good.   We saw Craig and Alec catch up to us, but they chose to eat on the opposite side of the street.

At one point, a group of local cyclists passed us.  AHA - I could hitch onto them and I did.   They were going just a bit faster than I was so I drafted behind them and made some good time. Kirk wasn't that far behind.   At one point - they stopped for a snack and we stopped to buy chocolate milk.

We had two ferries today - $2 for each ferry. The first one - the gate was down and as we arrived, I asked if there was room for two bikes and they let us on.  Not that we would have had to wait for long anyway. And right after that ferry - we were in the province of QUEBEC. I remember last year what an exciting moment that was.

Then we arrived in Grenville and there is a bridge going across the river.  And where did the bridge lead to?  Well back to Ontario - Hawkesbury and another quilt store.  It was a total detour of about 4 KM.   The lady at The Fabric Box was very friendly - she said - she had never had someone come to pick up the row on a bike!!!   There is always a first for everything. Lisa - better - get yourself organized -I hear there is Row by Row across ALL of Canada next year.

We arrived in camp just after 4 PM.  We were the first ones into camp.   Adam (driver from last year) is with us tonight as he is in between tours.   He is driving for the one week tours.   They stay in B&Bs, and they ride shorter distances each day - and there is a wine tasting tour. Takes five days to wind (and wine) your way from Hamilton to Niagara. Any takers???????

I see we have the annual party tonight at our camp ground.  It is going to be noisy.   Oh yippppeeee - thank goodness I had a good night sleep last night.

Just waiting for dinner to be cooked and had a great chat with everyone while we wait.

On that note I am out of here. 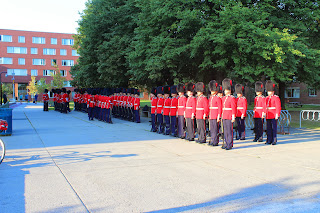 Ceremonial Guard getting ready for duty. They stay at Carlton University for the summer? 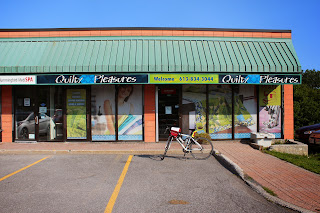 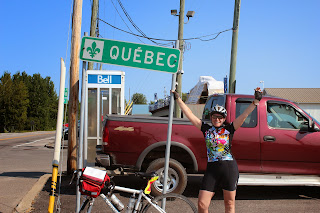 La Belle Province!!!!!   All signs leading to Quebec are SMALL like this 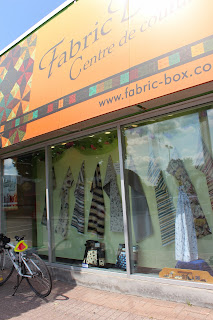 The Fabric Box in Hawkesbury, Ontario 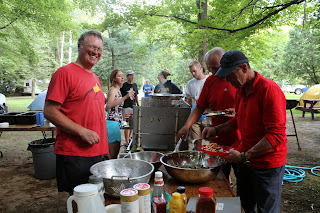 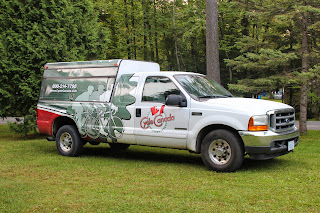 The small Cycle Canada vehicle which supports the one week touts in Ontario/Quebec
Posted by Elaine at 8:56 AM