Hey - it's my birthday!!!!!   We woke up to a glorious morning. And it was the last time taking down the tent!!!!!!   That is always such a wonderful feeling on a trip like this. It means the end is near.  Now not that we didn't enjoy the trip, but it is long and not always easy so the end is a good thing. Plus it is time to get moving back to reality.  I am getting excited to get back home and back to work!!!!

I surveyed my stuff to see what I didn't need.  Well - I ditched my pillow - I think with all the condensation from each night that it was a tad moldy and I also ditched my rubber boots. They did serve me well - I have always complained of wet feet with the camping thing as the grass is always wet especially in the morning whether from rain or from the dew. This year - NO wet feet. And dry feet are happy feet.   Plus the boots had a couple of big cracks in them so they went as well.

Now there was a LOT of luggage for everyone and we moved from the big truck to the van.  I offered to send my luggage home on the big truck and will pick it up when I get back.  Then I wouldn't have to worry about the two bags and a bike box on the plane.  So I had to sift through everything and get what I needed for the last couple of days.  Decisions had to be made - rain jacket - no rain jacket - big rain jacket?

And once all that was done - there really wasn't any reason to stick around camp.  Even though we only had 40K to ride that day.   I went back down that steep gravel hill - oh yeah! And then I was on the road.  We started off by climbing Kelly's Mountain.  This is not that huge of a hill, but big enough. The nice thing was - the grade was very decent and there was NO FOG this year so I was able to get some great pictures. We could see the Englishtown ferry on the way up and on the other side - we could see the bridge over the Great Bras d"or Channel. Oh shoot - I had forgotten that bridge!!!!

Anyway - we did have some fierce head winds. Oh yes - what would a day of riding be without the head winds.  At one point I am pedaling away on the way down Kelly's Mountain and thinking - I am making good time.  Yes - my speed was decent but I was having to pedal DOWN a 5 percent grade to get that speed. Then the bridge.  Not that high of a bridge, but with the fierce cross wind and NO shoulder or sidewalk - it wasn't a fun bridge to cross.

Whew - that's over and now 20K to the ferry dock. The first 10 were pretty easy because we had a tail wind - the last 10 K weren't  as fast, but before I knew it - I was at the ferry dock.  I didn't go right to the dock as it was still hours before we had to be there.

I zipped into North Sydney and off to the far end of town to Gloria's bakery.  Got some fresh baked goods, stopped at the gas station (Irving) and got some chocolate milk and then down to the waterside to enjoy the view.  Two ferries were in and the view was awesome, had a great snack and well - what a cool way to spend your birthday.

I figured the others were going to be arriving soon so I best go and see where they were.  I passed the Tim's and there were a few of the group in there.  They told me that Craig and Alec were at Canadian Tire which was next door.  So off I went to find them - I needed Craig for a task that day - that's why I had to find him.  I saw their bikes outside Canadian Tire (it's a guy thing - Alec - LOVES Canadian Tire - so they went there to kill time).  Anyway - there were a couple of lounge chairs outside (for sale) and I sat down to wait for them.  Here they come and just so happened to be three chairs so the three of us killed some time outside Canadian Tire on their lounge chairs.   It was pretty funny!!!!!!

Then we decided to head to the ferry terminal to see if they could accommodate us. You see - since we only had the van (not the van and trailer), there was room for 15 bikes on the van roof rack - the other five people would have to walk their bike on the ferry.  I wanted to walk my bike on the ferry and I did not have such a ticket.  We talked to the ticket lady and she said - No problem - she would switch Craig and myself. So I became a bike on and Craig became a walk on.  It worked perfectly.

Upstairs to our room - oh yes - there are FIVE women on the trip and four to a room so I offered to share with the men.  I got Alec and Craig!!!!   Which was pretty funny when it was announced since they have a reputation for snoring and I had said NO snorers. Alec had carried part of my stuff to the room and then I went outside to watch the ferry leave.  That Newfoundland ferry is so cool.  It is like a small cruise ship - just a massive thing - I can't imagine being on a HUGE cruise ship.  Anyway - pretty much as soon as the ferry sets sail - the BUFFET dining room opens and it wasn't hard to guess where the group was headed.  YEP - they were first in line.  I think we were all getting a bit hungry - so we did enjoy ourselves.  I do have to say that this group seems to be very FOOD oriented.  I don't remember that from last year - well maybe we were and I am just forgetting that detail.

Then the evening to relax - I grabbed my book and found a quiet spot to read. But after falling asleep several times - I figured it was time to go to bed.  I arrived at the cabin and Alec and Craig were already in bed.  I took the top bunk (don't worry - we already discussed that and well there was a good reason for the OLDER men to be on the bottom bunk!!!!)   It did take me a while to fall asleep - I know - get to bed and then wide awake!!!!!   However I have to say that I did not ONCE hear either of them snore.  They were good bunk mates!!   At one point in the night - we could hear the fog horn.  Just a nice soft blow of the horn!!!!   The crossing was smooth - we weren't sure what to expect given that Cyclone Cristobal was in the area.

Oh my gosh - I forgot the most important thing of the day. So we are waiting in the ferry terminal - the five bikes are outside. All the luggage is in the terminal which was sweltering in the heat. Then Bud tells us that we need a meeting upstairs. What for??????   We already went over all the details.  Some people weren't there - so how would we work that without leaving their luggage behind and then we had to lock up the bikes.  Oh dear - I was in a tizzy!!!!!  Especially since I had told people I would watch their luggage.  Anyway - I am pretty much the last person up the stairs - grudgingly I might add. And then - oh crap - they have a birthday cake for me!!!!   It was all a ruse!!!!!   They sang Happy Birthday and we had cake in the sweltering heat.  It was awesome.   Thanks to Tour du Canada for the fabulous birthday surprise.

And I bet you are wondering WHY I wanted to bike onto the ferry instead of walking on?  Well - if you put your bike on the van - then the front wheel would have to come off, you had to go to the van and well - it was just going to slow me down in the morning. So by biking on - I could bike off and then just set out for St. John's.   Ah - the best laid plans. Wait for it!

Have an awesome day. 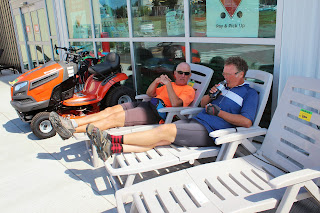 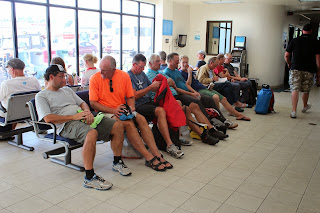 Waiting in the ferry terminal
Posted by Elaine at 5:10 AM