OK - I now remember how I managed to get those blog entries that were stuck.  And why they get stuck in SAVE mode is beyond me. I must be more diligent when I save (although I can't exit without saving).  I could not even access them on the screen - I can see the heading on the tablet, but not the body of the post and they are obviously not on the internet.  I finally used the down arrows - then hit ENTER and at last - I can see them on the screen.  However I can do NOTHING to them - no cut, no paste as the system is SAVING.   What to do - what to do???  Last time - I retyped them with a second computer.  Today I don't have that luxury - BUT - I do have my phone. So I took a picture and well - the rest is history - here is day 53.   I may be no techno wizard - but I will figure out a way to make things work.

A short day ahead - well short by our standards - it was only 114KM and I am OK with that.

Kirk and I left camp around 7:30 AM. The route came back so easily. I made two little goofs with the map but both of them only cost us less than a KM so it was no big deal. I remember the spiral ramp to get down off the highway after crossing the river. But one of the best part is the amazing system of bike paths. We were on bike paths forever as we cruised along the southern part of the Island of Montreal. Just blows me away at how beautiful it is and being Sunday - there were a LOT of people out. People on bikes, people with roller blades, people walking - a few on scooters (both kinds - those with motors and those without) and just about everything else. It was fabulous.

Then we were in Old Montreal. My old stomping ground. I worked there for 10 years and I loved it. Place d'Armes is completely different from when I worked there. Much more open. And NO - I did not fall this year!!! Remember last year - I was clipped in - turned to look behind me and CRASH!!!   Well - all was good this year. We went down a lovely cobblestone street - I have no idea how the Tour  du France guys can ride that fast on those cobble stones. They are very bumpy. Anyway  we found a nice little outdoor cafe (in the shade) and had a sandwich for lunch. Then we were off to cross the Jacques Cartier bridge.   Yes - that bridge is long and very high . But at least there is a seperate bike path and a big high barrier so no danger of falling off. Still if you are not into heights - it can be quite intimidating. Bridges are not my favourite thing, but this one is easy  compared to one other one we have to cross. Just suck it up - that's my motto.

Then we were out of the city and onto more bike paths . A few more twists and turns. One of the things that is crazy is that we rode on beautiful bike paths alongside a corn field. Then we arrive in a town and there is NO path - not even a shoulder on the road. While the province has done a fabulous job with the bike paths - there are still gaps between some of the bike paths.

It was a HOT HOT HOT day. We stopped for chocolate milk along the way at some point since I had a beer for lunch. We are in a new campground from last year as that one closed. The camp ground is awesome EXCEPT that as the lady at the front desk was explaining where the truck was - she mentioned a "hill" a petite cote. A small hill. Oh boy  I know what that means and YES - it was a crazy steep short hill. I have to get my gear shifter adjusted as I can't seem to change into the granny gear which I have tried to use twice now - why kill myself when I have the gears. BUT - I know there are hills ahead where those gears will be absolutely necessary.

So I set up my tent, had a shower (the showers are the BEST anywhere) and just relaxing with a  book. It just doesn't get any better than this!!!!!!!

Although at one point today with the heat - I almost wished for a brief shower to cool me down. Yes - the temperature has been very hot.  Like sweating like crazy hot.  I almost feel like I am in spin class.

Group dynamics - what a wonderful thing.  The group is smaller than last year and obviously quite different as well.  I remember my very first bike trip in 2010 when I rode from Vancouver to Inuvik.  I was a newbie.  I knew NOTHING about camping and even less about bike touring. Over the years (and with my excellent organization skills) I have learned how to pare down to the bare minimum,  how to pack everything tight and small and how to keep everything organized with minimal management. I have also learned what is important to take with you on a daily basis and so far - I am OK with just that handlebar bag.  You should see what some people brought. They have HUGE hockey bags filled with - I have no idea. Their shelves are stuffed and they carry so much with them every day. It is just so much extra stuff to have to manage - I could not and would not want to deal with it.  And here we are five short years later and I am the ONLY one on the trip with any kind of experience with bike touring.  For the rest - it is their first time.  I have to say - they are very brave - I took a number of short trips first before I committed myself to crossing the country.  Everyone is making out just fine - but funny how we need to have all this stuff around us to make us feel better, more comfort?????   I don't know - but I got TWO pillows in my tent bag so not lacking in the comfort zone at night.

And the group is a pretty good group.  Everyone is pretty friendly - we have a mix  -  while most of us are from Canada - we have a German, a Scotsman (although he was born in Canada), an Austrian and an Australian.   Five women - I am old enough to be the mother of the other four!   Anyway - not as hard to "break" into the group dynamics as I thought it might be, but then I just go with the flow since it is their trip - not mine and I am pretty flexible. 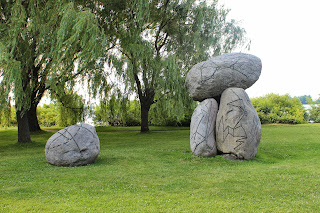 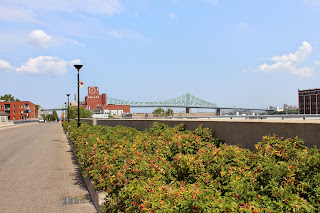