I want to say that I'm truly blessed. Why? Somewhere along the way, I learned to always look at the glass as half full. Oh - trust me - I face issues just like everyone else. I've just learned to NOT worry about stuff that I cannot change. I don't complicate my life, and I'm perfectly happy to use what I have instead of coveting something that I don't have.

Oh - I'm not a saint by any means. I have days when the world is a big bad place, and I want to stay in bed. Thankfully those days are few and far between.

Where did the CAN DO attitude come from? I wish I knew. My parents? Perhaps - they are still heavily involved in their hobbies, and they are in their mid-80s. My grandparents? - they were pioneers and grew up with very little. It doesn't bother me where the positive attitude came from - I'm just thankful that I have it.

This morning, the radio announcers were talking about TV and streaming services and all the shows and movies that people are watching. I haven't a clue what they are talking about. Even if I wanted to re-introduce TV into my life, I have no idea when I could do that. I need more time as it is (to clear out the paperwork in the office), and I'm struggling to find time to do that.

WOW -- Before COVID, the average (that's AVERAGE) Canadian watched 231 minutes of TV a DAY!!! That's almost FOUR hours. Imagine what that number is now. I can't imagine giving up 4 hours a day!

It's been over 10 years since I dropped the TV habit. So let's say that I watched one hour of TV a day. It was probably more like 2 hours (or more), but let's just say one. Over 10 years, that's the equivalent of 3,650 hours. If you broke that down into days - (divided by 24) - that's the equivalent of 152 days of watching TV for 24 hours in a row. Can you imagine that? I can't! So if ever you wonder how I get so much done, there's one answer! Remember - I am ME, and you are YOU! We do NOT judge each other - everyone has to do what they are comfortable with. I'm good with that.

Well, enough of that. I learned a very valuable lesson yesterday. Actually, I learned several lessons.

I did learn that you should READ what's on the screen when deleting. I had four pictures highlighted that I had transferred. I figured it would be easy to just hit DELETE since they were selected. Hmmm - I was asked if I wanted to delete the ENTIRE folder. Ah - that would be NO.

So I was on a roll. Then I saw something flash on the screen - something to do with recycling. Now, what the heck is that?

I continued on and got the photos transferred and deleted.  I am good to go with the next step.

Then I went to the folder to find the photos and WHAT???? or I should say STUNNED SILENCE. The ENTIRE folder was gone. All my pictures for 2020 for the blog, all the homework, and the prep for next year - GONE. I was so stunned, I couldn't even say a bad word.

Let's NOT PANIC. Thankfully, I had noticed the word RECYCLE. I googled it and GVOILA - I found my entire folder (intact) in the Windows 10 recycling bin on the home page.

PHEW   - what a relief. Two folders got recycled, but all is back in place, and within minutes, I was back in business.
So I learned something new, and it could have been a disaster, but it wasn't. You could have heard a pin drop during that time!
I had another peak at the Rose of Sharon. I mean, seriously, who devotes this much time to a silly bush! But I think Rhonda is right. There are two plants in one. More hot pink blooms right in the center and the leaves look slightly different as well.
I almost forgot to show you what happened in Studio B the previous day. I dug out another quilt top from that basket that needs borders, bindings, and backings before they get moved to the "to be quilted" pile. This is a wall hanging - made years ago. The top is done and the binding was also made.

Here's the photo of the binding.
All I had to do was cut a piece from that sunflower yardage and this project was ready to move to the "to be quilted" pile. I think it took longer to find the sunflower fabric than it did to get it ready to move to the "to be quilted" pile.
The remainder of the sunflower fabric got measured and moved into the quilt backing area.
I got the backing sewn and the binding made for this quilt that has been sitting on the cutting table for a week. It's now in the "to be quilted" area. Don't worry - there's still a LOT in that basket that needs to be finished before getting moved. But I'm on it!

So that's TWO quilts that got moved to the "to be quilted" pile. Yeah!!! Remember - any progress is better than none.
I got a Quilts of Valour quilt quilted. It's trimmed and ready to be dropped off sometime this week??
I have to order my batting for Quilts of Valour - thanks to your generous donations, I'm able to buy one roll of batting and perhaps even a second roll. That's so exciting. THANKS to everyone who donated. I have to place the order for that batting this week.
Then it was back to the Double Wedding Ring quilt. The top row is all trimmed, the middle needs to be trimmed and I got four of eight fabrics sewn to the paper pieced arcs. YEAH!!!! After that group is done, ALL the B arcs are done. I'll have to put it aside for a couple of weeks as I have a few more urgent things to get done.
And the pieces for the next sewing session are cut.
Yes - I had a little helper. He loves to be on the table and thankfully, doesn't try to jump off. He just whines or barks when he wants down.
Yep - a true little helper. Or should I say a cute distraction?
I was also running the embroidery machine in the background. There is NO time to waste these days as there's so much to be done and some of those presentations are going to take a wee bit of prep work to get them up to par. Plus I need to dig through those four huge boxes of samples to find stuff so I don't have to make all the samples that I need. Then I need to take pictures and upload them. Oh yes - never a dull moment at this house!!!

I managed to get the final seam done on that disappearing nine-patch. It's going to be pressed today and I hope to start working on the borders during our Monday sewing.
The snail's trail blocks are trimmed and ready to sew together as well. I'll do that during Monday sewing.

I now have three very good headsets and I use them for different things. The over-the-ear ones are for listening to audiobooks. Then I have a set of wireless earbuds that I use for my Zoom presentations. And the corded earbuds work for phone calls. Weird - I know, but it all works. Each has its pros and cons - a wire versus a battery being the main one!
I'm well on my way to LA on the Virtual Walk on Route 66. I have a little over 450 miles left to get to LA. I can hardly wait!!!! I hope to be there in November. 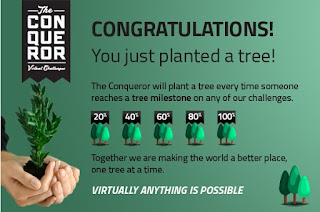 Well, on that note, I'd better get myself organized for the day. There's a lot to get done today. I'm making excellent progress and I need to keep up (with myself!). Trust me, I'm happy - I know it seems like a chaotic, crazy, and stressful life, but I love it.