WOW -- It's amazing what I can accomplish when I focus! The current projects are assembled on one table, totally out of sight when I'm sewing. Well, they are behind me when I sew, so technically, I can't see them! I did place a few odds and ends on the cutting table that need to be addressed, and the ironing surface is clear. So is the sewing table EXCEPT for the Cherrywood Challenge.

There's NOTHING to distract me. I started a new audiobook, and I was good to go. I got so much done!

I'm happy to report that the Cherrywood Challenge is together, and I need about 20 minutes more, and the quilting will be done! Oh yes - I should be hand binding that piece today at Monday sewing. I'm a happy camper! I haven't made the binding yet as I need to audition two of the pinks to see which one looks best.

I wasn't sure that I would have enough white, so I managed to borrow some white from Helen Anne. I had very little leftover but didn't need to dig into Helen Anne's bag. Thanks, Helen Anne!!!! I'll be returning the white!

It's amazing what you can do when you focus and don't let other things distract you. I have to say that I was tired, though, and I needed two naps! Yep - it's tough saying good-bye and just having extra people in the house and breaking up the routine. It's exhausting, and there were no little ones involved! Well, there was Little Bear, and he's a handful! I can't imagine babysitting grandkids all day. I'd die! OK - maybe that's a bit dramatic, but what a tough job.

I hope to get the challenge done today and get those pictures submitted, and then I can put that one to bed. Just the waiting process to see if they accept it for the show.

OK - I have to tell you about this new author. Alan Bradley - he was recommended to me by someone with a quirky sense of humor, and well, sometimes, I haven't liked their recommendations. I won't mention their name, but they know who they are! OH MY GOD -- this book (and it's a series) is fantastic! Basically, it's an 11-year old British Nancy Drew. The book is quirky and fun! And you got to love the main character - she's pretty feisty. It's so much fun to listen to the book with the narrator (with a British accent - Jayne Entwistle), which adds to the story. 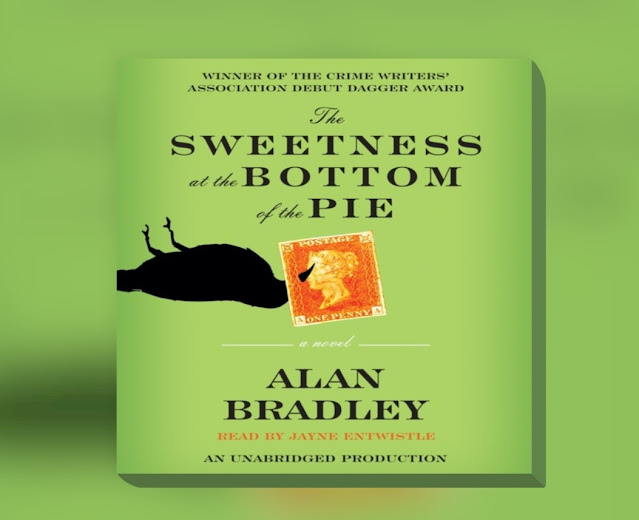 I should easily finish the book today - after Monday sewing. Can I really be moving towards audiobooks over hard copies? NO!! I still like to read real books, but I also love audiobooks. I don't think I'll ever go for the e-books, but you never know.

I took Bear for his last walk before M left for the airport. As usual, Murphy is waiting in the window. She doesn't like to be left behind and stays by the window. She can be very patient when she wants to, which is ONLY when I'm out walking another dog.

When I shoveled the driveway, I decided to leave my car covered in snow. I'm not going anywhere, and the temperatures are going up. I see this morning that the snow is gone off the sides. And I figure in the next couple of days that it'll be clear. How many tanks of gas will I put in the car this year?

OH -- I did press and trim a couple of half-square triangles. I've got to do a few every day to get rid of the basket that sits on the stand by the ironing board.

And then there was the puzzle. I swear that I thought I'd be defeated by this puzzle a couple of times and would have to abandon it. But no - listening to the audiobook and focusing (that's going to be the buzz word for the new year), I managed to get part of that darn steering wheel together. It's not easy. I know I keep saying that, but it's a challenge.  And after these "easy" bits are done? Well, I'll go to the sky since there are fewer pieces in the sky.

M did some cleaning while she was here and unearthed a couple of treasures. Here's a couple to share with you. Tickets from a couple of shows that we went to. The Lion King -- TWENTY years ago!! I knew it was a while back, but 20 years? And the Science Center? I don't even remember that show. But the tickets are in the recycling now. We don't need them. 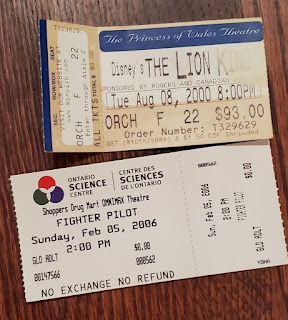 And I found this brochure for the KW Quilt Show in 2009. WOW -- they must have gotten a good deal on printing. It's a little book with all the quilts listed and their sponsors! It's quite thick - does anyone read those books? I guess we won't be seeing any books like that from 2020. Well, it's gone as well.

She did go through a couple of other buckets (three of them from the office), and I need to deal with what she didn't want. Maybe, I'll do that for a break this afternoon. I'm not going to get as much cleaned up in here as I would have liked before the end of the year, but if I can say that three boxes got dealt with - that's better than nothing. And there is one box for donation - I should get that prepped and arrange for a pick-up. I can make a dent without much effort - I should give it a try.

On that note, I'm out of here!