Let's just do it!

I'm fired up! I'm on a roll, and there's nothing that can stop me!!

I can't even keep up with posting the pictures, but I'll try.

Studio U looks amazing! But you have to wait until tomorrow for the pictures. While I was upstairs, I unearthed a couple more trouble spots, and so I dealt with those as well. Studio B is looking pretty good, as well. There's not much left. I know I keep saying that, but this time it's real.

Oh, there's loads more to do, but at least, hopefully, after today, everything will have a home. When I feel the need to sort, I can pick one area, pull it apart and sort it out. But like things are together, and things have a home. That was my goal for 2020, and yes - I'm down to the wire, but I did it - well, I'm going to do it!

My Cherrywood challenge got entered yesterday. Well, in advance of the 11 PM deadline. At least 12 hours - that's huge! Now we wait and see if they decide that they like it.

I wonder what the next theme will be? I have to say that I LOVE the Cherrywood fabrics. The colors are gorgeous, the hand is beautiful and well - just nice to work with. And I love doing the challenges - more on those another day.

OK - let's get to the serious stuff for today.

Here's a bit of handwork that I got done during Monday's Sewing.

This is the LAST block for Vintage Christmas. The embroidery is done, and now the blocks are ready to sew together. I was hoping to have that quilt top together, as well as Christmas Fig and Summer Moon, but alas, that hasn't happened. BUT the tidying is way more important!

I also got the antennae stitched on one of the three butterfly blocks that I need for my UFO homework on Quilter's Patch.
In my archival digs, I unearthed a huge pile of Canadian themed fabric. What was I going to do with it? No idea - so it's now shelved.
I found two pincushions. Good thing because right now, I only have one in Studio B, and it's not enough!
I also started to quilt this quilt. I've agonized over how I was going to quilt it for MONTHS. After watching a video the other day, I decided to quilt a spiral using my walking foot. It's not the kind of quilting that I like as I'm constantly rotating that quilt, and I didn't baste it! Ooops!!! So far, the back looks OK. But I'm not sure I'd do this again.
Here's a detail of the quilting. I was hoping to get it finished yesterday, but well - I was rather busy with other stuff.

And yes - I'm sneaking in a few minutes here and there to work on the jigsaw puzzle. The steering wheel is done, and I'm working on the sky. Slow and steady!!

I found these quarter square triangles rejected from another project, so I decided to trim them. The ones that were sewn are trimmed and ready to be used somewhere. There's still a bit of sewing to do to finish them up, but the machine is set for quilting, and I didn't want to change the thread. I have a couple of tins of random quarter square triangles, so these units will join the others when I'm finished with them.
I decided the best thing for this doll quilt is to chop off the damaged side, rebind it by machine and donate it for a pet mat. That got moved to the current projects table, which is about to explode, but that's OK.
I also unearthed this large orange tray, which is not being used to its full potential. I found quite a bit of yardage that had been set aside for what? Oh, some project, to be sure. But it's all filed in the stash room now.
I seem to have a problem with tags - the tag is still on it, and we know how long this has been since these guys designed products. One of them has since passed on, I believe.
I also unearthed this bag, which is perfect for handwork. Yes - it says Worm Binder on it - EXTREME no less. What does that mean? The worms are extreme??
Inside I found a brand new pair of scissors and a $20 bill. I tried to take a picture of it, but of course, that doesn't work. But it's an OLD one - pre-plastic money days. I guess I should spend it.
I added some pockets to hold DMC floss in the worm binder, and it's filled with other pockets that are perfect for small handwork projects. I'm trying to get myself organized to do handwork in the evening when I'm tired of sewing. With all the tidying up, I freed up an easy chair upstairs that is very comfortable. I was happy as a clam last night as I ripped apart a tote bag that I want to fix. Oh yes -- I'm so busy remaking or repairing stuff that I've no time to make the new stuff. You know what? I'm OK with that. I find it very rewarding to rescue something.
Let's see what else I found. Oh yes - the leftover bits from my red and white log cabin. Why didn't I put this away? No idea, but all is shelved now. I even started a new scrap box for red and white.
Oh, plastic bags do not last forever. This one just ripped apart in my hands, and all the contents spilled on the floor.
You're kidding me???? More thread and zippers? I swear - I could start a zipper store!!
And I must have had a thing for pink and green at some point. I think this was for more zippered pouches. All of the items are shelved now.
I found this basket of Stonehenge fabric. I was going to make a second Kaleidoscope quilt from it. Seriously?? Why would I want another big quilt? I found four blocks and loads of yardage.
Oh - I think there's something wrong with one of the blocks. I'll add that to my pile of stuff to pull apart tonight. Then I'll repair it and make a table topper with the four blocks. Then it can be done!
Not only do I rescue fabric, but it appears that I rescue other things as well. I bought these tiebacks - one is missing the finial. I like to use the tie backs to hang up my quilts. So what can I replace the finials with? Door knobs?
I did manage to fill and sew up three pet mats. I'm accumulating a stack of these, so I will have to arrange a drop-off in the next couple of weeks.
So I had a shelf/quilt rack hanging on the wall, and one day, months ago, I went downstairs to find the shelf had fallen off the wall.
It appears that the plugs that I used did NOT open in the wall to secure the item. Now, why did that happen? Three plugs failed??
The wall has looks empty ever since, and I want to hang a quilt in that area. The shelf is also a quilt rack. I've decided to use the silver tie backs to hang a new quilt. I do have a black rod - I mean, where will you find a silver curtain rod? For now - it'll have to do.
See -- this is the plug on the back of the rack- it barely opened. Maybe the screw was too small for the plug. That's probably what happened.
Shoot - I thought I took a better picture of the quilt rack. But it's up for grabs - FOR free. If anyone wants it - you have to be able to come to pick it up. It's about 36" long - it might be a bit longer. The quilt goes under that bar with the three knobs on it.
So this is what the cutting table looked like this morning - I decided to put everything left on the floor on the table so I could deal with it today.

And this is what the area at the bottom of the stairs looks like. Yeah!!!! Isn't all that space so inviting??

So now I have room to set up a table with mixed media stuff that I want to work on.
As I was setting up the table, I spotted this box of stuff. Oh, god - another box. Well - it has a variety of things in it. But since I'm in the mood, I might as well deal with it today.

It's a box of odds and ends - you know the stuff you have no idea what to do with, so it goes in a box. Well, today is the day! Let's just do it and get it over with. Then I can start the new year with an immaculate space.
So I did the unthinkable - I emptied the box onto the cutting table.
But I'm in the mood - let's run with it. I finally decided that I NEED to throw this old ironing board cover out. I thought perhaps I could salvage a part of it for an ironing pad. Seriously?? I don't need one, so it goes. Phew - I'm going to need a lot more of that discipline today.
I spotted this plastic cabinet. One of the wheels got broken off when I loaned it to someone. GRRR!! OK - lesson learned - do not lend stuff! It's going to remain upside down for the moment, but at some point, I'll think of some way to fix it. HEY - I could jam a piece of wood in that slot. OH - I could put a caster on a piece of wood and put it in that hole. HEY - I have a couple other of these cabinets that are broken. Let's hope that I find the casters. 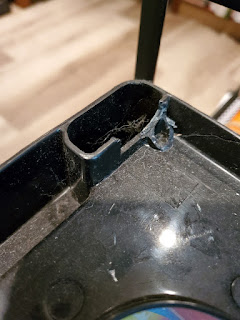 And here's something else I'd like to get rid of. I have FIVE tuffet forms that are looking for a home. They are cut, with a batting skirt on the outside. The wooden bases are predrilled, and all the supplies for a total kit are available if anyone wants one. NO - these are not free. Perhaps we can have a small class - there's only five, and that would get rid of them.

Well, I'm sure I'm going to unearth a whole lot more treasures today!! Don't forget to set your timer for 10 minutes and grab something to tidy up. It's going to take a lot of 10-minute sessions, but when you're down to the last bit like I am - well, you can't imagine how euphoric it feels to get to this point. I'm a very happy camper!!!
Have a super day!!!!
Ciao!!!!