Well, that was a bit too close for comfort. Don't worry - there was never any danger of bodily harm - just barely enough time to finish my audiobook before it vanished. While I love not having to return a library book, you have ZERO forgiveness with the audiobooks. When its time is up -- it's UP!

Look what I mean. 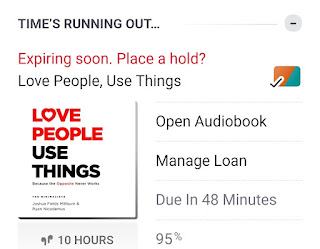 TWENTY-SEVEN minutes. I CAN do this! And I did. 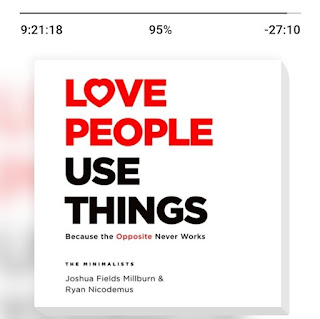 Actually, this would be a great book to discuss with kids. The kids that WANT everything because of the influence of advertising. I DETEST advertising with a passion. It's one thing to let us know of new products, but to MAKE us believe that the new product will increase our happiness is so much bull that -- well, I can't believe how the advertisers sleep at night!

And the other thing this book would be suitable for is FOMO - the fear of missing out. If you have FOMO, that's OK. But think about what you "want" for 24 hours and then decide. Don't rush in on an impulse, only to discover that you're now stuck with something you didn't really need or doing something you didn't want to make.

The other thing that kills me is that I'm browsing through some older magazines from the gym, so they focus on good eating habits, exercise, etc. If only we believed and did the things they talk about, there would be a whole section on self-help that wouldn't be needed. Let's face it - many people in this world are happy to collect junk, overeat the wrong foods, clutter up their homes and waste countless hours in front of a screen. AS long as they are willing to do that, the advertisers will go after them with a vengeance!

We all know what we should and shouldn't do, but how many of us can actually follow all those rules? I feel pretty good about most areas of my life -- I eat reasonably well, except for that daily dose of chocolate. I exercise daily, I try to limit my screen time (when I'm not working), and I now realize how the clutter has affected my life. And I'm becoming more sensible with money. So I don't feel too badly about how I turned out, but it took a while to get here, and LOTS of junk was purchased along the way.

HEY -- I might be able to write a self-help book one day! WAIT -- I didn't reach rock bottom and work my way out, so I'm not qualified!

Or you decide it's time to get rid of it, which requires more management. Yes -- the more you own, the more time you waste trying to deal with it!

So I have my five tuffet kits and five interested people. So I dug out the tub with all the supplies in it, and I decided that I could use the tub somewhere else. Here's what was in the tub.

That does not need to be in a big tub, so I got a smaller container and filled it with the supplies.

Some of the above were for the various stages needed to make the tuffet kits. I will NOT be making more tuffets, so there is no need to make up more kits. Some of that stuff can be stored with the tools. But I may be required to help some people assemble the final bit of the tuffets, so some of those tools will be needed. For the moment, the remainder of the stuff will go in the smaller box and remain with the tuffet forms until they are gone from my house.

Getting those kits organized to go out the door took time. I had to see what supplies were needed for each kit; I had to price out the components as the kits were not all quite the same (some were missing legs which are easy to find). So all that took time!

Thankfully, I had put ALL the paperwork, including pricing, patterns, templates, etc., in ONE spot, so it was quick work, but it still took time to manage.

Which promptly got moved to the area under the long arm, and now there are only TWO cardboard boxes that remain. Am I excited? You bet --- I WILL get this stuff under control, and I like that it's going gradually so I can deal with it properly instead of having to rush to figure out what to do with everything at once! Someone could have dealt with those five kits, but how much time would it have required?

I like organizing and seeing spaces empty out, so this process is right up my alley! I love the process, but at the end of the day, I often wonder what actually got done? Without having to manage my stuff, I'd have way more done, but this is work that needs to be done. Not necessarily a productive day, but it will definitely help when downsizing day comes. Slow and steady!

Then I got on another roll and organized my retreat toolbox. Good grief -- I had two  (not sure why), but it was time to consolidate into one.

I started by emptying both of them. Then I got to work sorting like things.

Here are some of the cleaning supplies I found. There were also Q-tips in there. So now I have a couple of different-sized brushes, some Q-tips, and a cleaner for the iron. The rest got put away in Studio B. And yes -- I may have to relook at the extra supplies in Studio B and Studio U as I think there are a few in each. I need to have the extras in ONE spot and one set for each studio.

I picked the larger of the two boxes and proceeded to put everything in that I would need when sewing away from home.

At the last retreat, I had made a list of all the things that one would need when sewing away from home. I've included that list in the box and will double-check it later. I found oodles of machine embroidery bobbins in one of the kits. But NO empty bobbins. So I swapped out the machine embroidery bobbins for an empty bobbin for my machines. That makes way more sense.

I should write out that list and use it as a checklist which I can tape to the lid of the box. I might do that later today, and then I can share it with you!

I did NOT get a lot of sewing done, but I got the final part of the white for Among the Stars Again cut and ready to sew on -- perhaps later today. Although all this cleaning takes up oodles of time! But it's almost time to start emptying that project box with the excess fabric. I love my efficient ways of cutting background fabric for a quilt. This is all that remained from the white background, except for the large piece of yardage. This included the borders as well.

One more customer quilt got done. There are only three more to go on my semi-urgent list. They don't have deadlines, but I have a deadline to complete them. There are a few in the queue for July and nothing in August!

All is good on the quilting front! I have a list of the quilts and the day of the week they will be done. It's on a small whiteboard by the machine. But I love to physically place them in order as well. Do NOT ask me why! I guess some OCD tendencies in me are sneaking up! But I've always been like that. As I near the end of one book, I get the next one out and ready!

Do you remember the mat I made a while back with the stencil from the digital cutter? The mat is still in the house because of the mess outside, and I think it needs to be bigger. Lexi has claimed it as her own. Although she's too big to lay on it, she loves to sit on it!

She looks like she's having a bad hair day, but every day is a bad hair day for her! She is NOT a black husky, so as much as we remove her hair, she'll always be mottled. But I'm trying to remove more hair every day, and it just keeps coming. The more I pull out, the more that needs to come out! It's never-ending. Sort of like my weeding!
I got a bit more done last night and still have a couple of days' worth to go - I may get it done before Tuesday, but most likely, I won't. But it'll be close and gives me the satisfaction of doing something outside! Instead of lying in the gazebo!
It doesn't matter how many times a day I sweep the floor; it's a mess. Case in point, I had just cleaned the floor, and the next thing I knew, Murphy came in the house and dropped a trail of leaves and bits from the backdoor right to the front! Thankfully, we're not super neat freaks! But seriously, Murphy? Can you not let it be clean for 10 minutes?
How can you not love that face?
Well, it's time to get the day started. I have lots of paperwork to do, which I'm trying to avoid, but I can't any longer. The weekend is almost over, and I said it would be done by Monday morning!
Have a super day!!!
Ciao!!!