It already looks dull and dark outside, and it's only July 1, a mere 10 days after the Summer Solstice. But it's overcast and no sun! I hope everyone is enjoying the weather, as it's been glorious here the last couple of days.

So I did something a bit different yesterday. I've been walking for all my errands within a couple of KM of the house. I had to pick up meds for the dogs, which is a bit too far for me to walk. I had two choices - I could get in the car and drive there or ride my bike. The bike path goes right in front of the vet's office.

Yep -- I got out my bike and dusted it off, as everything in the garage is covered with dust. Since I did NOT need to take the girls to the vet, I rode my bike, so it was perfect.

The vet's office is very close to where we used to live, and I always said it was 10 KM away. Nope -- it's just over 7 KM. A perfect distance for a casual ride. I used that small backpack I had found for hiking, and because it has a strap in front, there was no danger of it falling off my shoulders while riding. What a handy little backpack! And I only found it because I decluttered that closet a while back.

The path goes alongside this major road, and you don't have to worry about riding in the traffic. Don't worry -- the big hill sign was if I went down to the river, which I should one day.

The traffic, for the most part, is excellent, but you have to watch people like a hawk. The biggest culprit is those flying up to a stop sign/signal and don't stop at the BIG WHITE LINE. Nope, they keep coming through, hoping to not stop, so they can make a right-hand turn. And if traffic is in the main lanes, they can't see who or what is in the crosswalk.

That happened ONCE yesterday, and thankfully, I wasn't in her lane because she would have hit me. And another person crept into the HUGE green strip (for bikes) across the road while waiting for the light. You can bet that I yelled at him! I love this new freedom! I'm sure they all ignore me, but it gives me great satisfaction!

Anyway -- I managed to get in a 15 KM bike ride and accomplished my errand! Yeah!! Thank you to the city for providing VERY efficient bike lanes!! Now, I could bike to the gym for my spin class, or does that seem wrong?

I guess the inside of the grocery store must be done -- I like the new self-checkouts! Now they are painting the outside.

I required a wee nap yesterday, and when I woke up, I saw this. How long had she been watching me?

Another customer quilt was completed. I have a few that, for timing reasons, need to be done within the next couple of days. Then I hope to alternate between customer quilts and community project quilts.

So what's the scoop in the front yard? I'm still parking my car at the neighbor's house at night. This is our new front step. Yep -- it's like an obstacle course. They put the screenings over the clean concrete in preparation for laying the pavers but haven't applied them yet. That is PURE grit, so I hauled up two pavers to help prevent the grit from coming into the house. Hopefully, next week, the pavers will be installed.

All the edging is done in this area. Now there is a giant landing step at the bottom of the stairs and then a small patio beyond. The screenings are in there as well in preparation for laying the pavers.

And there's our front yard - a porta-potty, an excavator, and a pile of screenings. Yeah! No room to park my car!

It's time to get back to the sewing machine. I decided to work on my Amongst the Stars as I need to get that top together for our last class in July.

I was adding the sashing between the rows and was doing very well until I realized I had incorrectly sewed the rows together. I just had to remove one seam, but otherwise, I could have shown you half the quilt together. Instead, it's pinned and on the ironing board, waiting for later.

So I have this AMAZING iron from Singer. I know that some of you purchased this iron on my recommendation, and I had to say that I love it. It did develop a wee issue of leaking, which wasn't good, and many people returned the iron. Since I didn't buy the iron, I couldn't return it, and quite frankly, I still wanted to use the iron as I really like the pointy tip, the style, and the steam level.

I tried working with it for a while with no steam, and I HATED every seam I pressed. So I got a ceramic plate from the kitchen and placed it under the iron. Yes -- it leaks a bit from the reservoir, but it doesn't leak when pressing.

I also don't fill it to the top if I know I won't be using it much. I tell you, I found the PERFECT solution for the iron. I'm happy, my ironing board cover is happy, and all is good!

Now I wish that the iron did NOT leak, but it appears that manufacturers struggle to make a tank that won't spring a leak. Why is that? Why can't the seal stay sealed? I think there are instructions in the manual to put the iron in a non-stem position when not in use (maybe that helps with the pressure that blows the seal?) or empty the iron after use (great if you have a sink handy). Anyway -- I've found a SIMPLE solution, and I still get to use my AMAZING iron.

Speaking of simple, I'm now listening to the book by The Minimalists -- Josh and Ryan called Love People, Use Things. 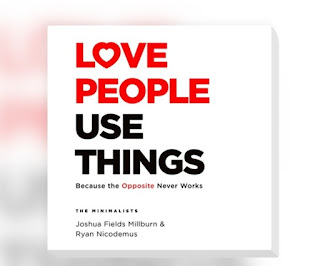 As I've said before, you can't be an average person and write a self-help book. You have to come from the bottom and get to the top before you can write a book. Some parts of the book border on despair and go on and on in too much detail about their misery, but anyway. And I have to say that I don't find their voices or style of reading exciting.

However, removing those bits, there is a LOT to be said for the book's content. It's about MINIMALISM in what we own, what we do, and what we eat! It's right up my alley. And I love the part about the FREE MEDICINES  --- exercise, sunshine, sleep, and food. I hope I got that right.

Thankfully, I'm good on all four counts, which is probably why I don't take any medication. That and good genes! Thanks, Mom and Dad!

But there are a lot of truths to this book and things that I swear by, and I had to laugh out loud when they talked about gift-giving. They recommended consumables and experiences -- just like I said in my blog the other day! No one probably needs another tie or pair of socks unless they wear those ties and use the socks.

It's an interesting read, and they did one exercise a while back where people were required to pack one room, two rooms, or the entire house as if they were moving. EVERYTHING! Then as the next couple of weeks progressed, they unpacked what they needed. It was amazing how much remained in boxes after the three weeks! I can see that happening at my house. I'm doing it a bit differently, and I've got a plan, so I'm not worried about that.

Anyway -- it's a good read, I've gotten a few extra pointers, and I think one of the biggest ones is to declutter your house, your mind, AND your schedule. And I've been doing that. I haven't made a magazine quilt in months! I've mostly cleared my schedule for the next THREE months, except for a few obligations here and there.

I still have loads to do, but that clearing will give me a chance to do some stuff for myself and clear some of the backlogs!

I've read another chapter in my family history research and sent a note to my parents about my meager progress. HEY --- any progress is progress! More therapeutic weeding got done, even though the girls think it's funny to play fight with each other right in Mom's face! Sigh!!! Such attention seekers, those girls. I'm not done yet, but I figure another few days, and I'll be done -- even the dreaded flagstone.

The gardener guy was supposed to come on Wednesday, but it rained, so he's coming on Tuesday and well, there might be no weeding for him to do and NOTHING in the front, so he will just have to prune, but I might get him to tackle the ivy next door!

I'm a "bit" behind on my cardio challenge for the year, so I hope to get out on my bike every day or at least every second day to get some miles in to make up the difference.

Well, that's it for today! I really need to get to the computer and answer some e-mails.