I think my neighbor heard me! While my lights came on at dusk, her house was dark! Maybe they are not on a timer. Or perhaps she only turns them on when she has company coming? Either way, I hope we don't get to see them often. I've spoken to the neighbor between us, and she hates them also as they shine into her house. Hopefully, we'll all be neighborly and get along, but the people living there are pretty elusive. You rarely see them. Actually, I think it's just one person who lives there.

But I was moving my car last night, and she pulled into the driveway seconds before I got out of my car and didn't stop to say hello - just went into the house. But then she has a big dog, and I think the dog is cooped up all day, so it probably needed a bathroom run.

Why did I move my car? It was windy, and I had visions of the porta potty falling onto it.

The sky was very stormy, and I'm not sure if we got rain or not.

We turned on the AC in the morning, but by the end of the day, it was off, and the windows were open. I HATE it, and the basement was so cold; I had a blanket on my lap and was wearing a sweatshirt. Listening to the wind in the trees, the wind chime, and the waterfall, as well as letting the dogs have complete freedom in and out, is much better. And the heat is NOT that bad -- it's not like we're exercising in the house. Thankfully, we both agree on that situation.

Look at that Murphy making herself at home in front of my quilt on the design wall. I made sure that her butt wasn't touching the quilt. Look at how dirty the wall is to the left of the quilt. That's because of her. I'm not sure why it's dirty so high -- does dirt migrate?

And then I turned around, and there she was hanging on a wall that I was working on. Oh, Murphy!
I have more writing to do - I wish I could make faster progress, but I'm slow at editing, and that's OK. But I have the urge to purge and sort today, and I'm working in Studio U. It had become a dumping ground for several things. I've moved and culled and sorted, so there's not much left to do, and it would be nice to get that room under control and all the junk gone and all the batting back into the closet.
I might sneak a break from the writing to do that!
So, let's take a peek at my retreat toolbox. There's nothing worse than getting to a retreat and realizing you forgot a tool at home. OK -- at least you could likely borrow a tool from someone, but if you forget your foot pedal? That's a whole different story.
I found this container with little compartments in it. I was going to make something out of fabric with vinyl pockets, and I might just do that still, but in the meantime, this is my retreat box. I had several of them, but they have all been consolidated into one. I mean - I only need ONE box. All the excess tools are in their home in my rolling carts.
Here's the list of what's in the box:
I think that covers all the items in my kit. A few things on the list above haven't made it into the box yet, but I might work on that and then figure out how to design a bag that will contain all the stuff without taking up a ton of room.
Here are a couple of pictures from inside the supply box. I'm not a big user of pins, so I keep the few pins I take (enough to pin on one border) in a needle minder and some hand-stitching needles.
Some brushes and Q-tips if I need to clean the bobbin case while I'm away.
A few different packs of needles and a film canister to put the used needles in. Someone suggested using an empty needle package and ensuring it is marked OLD needles. Then it's flat and doesn't take up a lot of room. I like that idea.
A spool of black and grey piecing thread and at least one empty bobbin of each of the two sizes for my sewing machines. I never know which machine I'll take, so I'm prepared for both scenarios.
The rotary cutter is in its case (to protect the blade), and there's a spare blade in the case beneath it.
This area is the fullest and, for obvious reasons, the messiest. All the long things like the marking pen (I only take one), the pencil and pen, and the sewing tools. It would be better if that had another divider down the center, but seriously -- it's not a huge deal.
I've asked at several retreats if there is anything else that should be added to the list and if you think we missed something, let me know, and I'll add it. I should make a list of those items, print it out, and keep it taped to the lid. The most important thing is NEVER to remove anything without putting it back. I don't check this box before I leave, and since I'm the only one who touches the box, all the stuff should always be there. I've been pretty good about that and have never missed anything once it got put in the box.
I'd love to hear if you have a suggestion for the type of container to use. I know the bag I want to make and think I have a pattern to use as a guide. I thought I took a picture on the weekend, but I can't find it now.
OK -- this is the type of thing I'm thinking of making, and the inside will have "pages" with vinyl pockets, so everything is easy to see.
So have you ever worn a garment and hated it. Not because of the garment itself, but because the tag is itchy and scratchy? I pulled out a T-shirt I don't usually wear because it has a V-neck, and I hate V-necks for some reason. I also hate scoop necks, and the only kind I like is the high scoop. Yep -- I'm particular that way, and I have a big scar on my neck, and I'm sure when I was younger, having it exposed bothered me and now the precedent is set!
Well, not only did this thing have a V-neck (I wore it yesterday and survived!), but the tag was itchy.
So this morning, I removed the tag and resewed the seam. You cannot just cut the label out, as that leaves an even worse itchy mess. 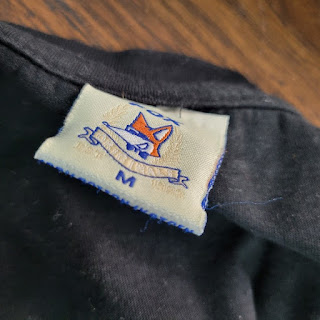 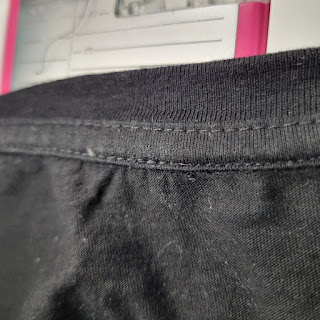 And when I put it on, the difference is super noticeable. Yeah -- the next time I wear this shirt, I might like it! But I didn't procrastinate -- I fixed it right away! Yeah me!!!
Well, it's time to get moving. I hear we might get our driveway washed and sealed today?
Have a super day!!!!
Ciao!!!!