How to get things done!

If I'm not feeling well, I need to blog about it. Now I also need to be careful that I don't jinx myself, but I had a ton of work to do yesterday. Fortunately, I felt great when I got up, and ZERO napping was required the entire day, so that was a bonus. And I feel great today, so could I have reached the turning point?

I quickly wrote a list of everything that needed to be taken care of. I am my mother's daughter when it comes to that because my Mom is a list maker. I've found numerous lists around her house -- she makes lists and writes down everything! At least I don't keep my lists when I'm done!

Was the list doable? I didn't know, but I needed to empty my head and get some of it written down. And one by one, I worked my way through those things. ALL of the semi-urgent paperwork got completed. I finished the last of it last night. Phones calls were made, projects were packed, e-mails were sent, and I made huge leaps and bounds in crossing things off the list.

There are still many things that need to be done - I have a lot of writing to do, but those urgent things were completed. The next small pile of stuff to do is sitting here waiting for when I get back! Yes, back because I'm on the road again.

Someone sent me this poster, and I'm sharing it with you. If anyone is in the area this weekend, there is a garden tour with QUILTS on Sunday. What a great idea, a joint effort by the Brampton Quilter's Guild and the Brampton Horticultural Society. Shoot --- I won't be around, but it would have been a fun activity.

Hopefully, that is large enough for you to see how to buy tickets! 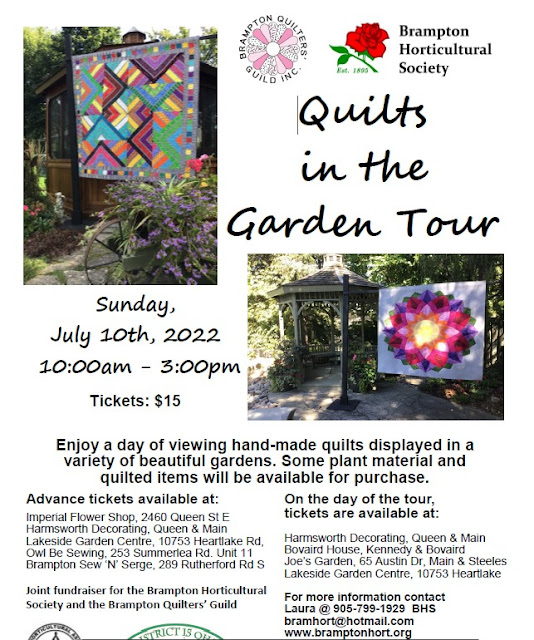 And I'm closing in on the finish line for my virtual challenge on the Pacific Crest Trail. I started in late August of 2021, with 4,000 KM facing me, and I'm now down to 136 KM. Yikes -- I just checked my average DAILY distance, and it's over 12 KM a day! Now how the heck did that happen, especially in the last couple of weeks when I didn't do well at all. I guess I had a good bank of extra KMs in there.

At that rate, I should be finished in less than two weeks! I will take a break from the virtual challenges for a bit. Well, not exactly, as I am working on my HUGE goal for cardio miles for 2022, and instead of an afternoon walk, I'll be riding my bike more to make up for the wee deficit. I had counted the KMs from spin class and a few rides in the summer, and with the pandemic and a bit of travel, my spin miles are down, so I need to get back on track. Then I'll find another virtual challenge to do.

With the completion of the Pacific Crest Trail, I've finished their THREE longest challenges. But there are a couple more that are long. I don't know why everyone picks the short ones and complains about the long ones. We pay the SAME price, so I am definitely getting my money's worth! Others have loads of medals and started way after I did. I only have two challenge medals so far, and I'm good with that!

But it just shows that slow and steady is how to win!

There's that Lazy Lexi! I caught her napping by the front door, and she lazily opened her eyes as I approached quietly. She doesn't need to lift her head to acknowledge you are there. Nope, she tracks you with her eyes, and because her eyes are blue -- you can see her do it! What a princess!

Significant progress was made in the front yard yesterday. Not only did we have one digger, but we had two. They keep changing them out, and I never know what we'll find. They are now excavating the driveway in preparation for the new driveway, so there is a BIG drop into that area.
And they have started to lay the new walkway around the patio area. I still have those horrible screenings on my front step, which is a bit messy, especially when there is rain, but it should all be done in another couple of weeks. I'm guessing the driveway will come soon enough since they started the prep. They are slow and methodical, so the driveway may not come until next week.
As for the weeds? I haven't touched them in a few days, and hopefully, the gardener guy will come today. We had rain yesterday, but the landscape crew worked right through. The rain was only in the morning, and it wasn't heavy. So the gardener guy gets to finish off the weeds for me, and I won't even get to see it until Sunday when I'm back.
Instead, we went to the movies last night to see Top Gun - Maverick. OK -- so I love Tom Cruise.

So I've seen a lot of background information on this movie, and those pilots were really in those planes when they flew those high G's. He wanted their faces to be realistic, and you can't make that up. They went through very rigorous training to get into those fighter jets, and the military training personnel was betting that some of them would bail. NONE of the actors bailed. Those actors did NOT fly the planes, but they were in them. I'll have to tell you about my movie experience another day!

Here's a link to the 10-minute video if you want to watch it. I don't know if I would have had the stomach to do what they did.

Anyway -- it's time for me to pack the car. I've been good with the packing, but can I get everything in? I need to take those two tuffet kits, which might be challenging.