Yes - the Winter Olympics start today and as I write this, the opening ceremonies are happening. Since I'm not a big fan of TV, I won't be watching. I'll catch a few of the highlights on the internet. That's OK by me.

This came in my e-mail yesterday and I thought I would share it with you in case you didn't get the same e-mail. Here's a cute idea to cheer for the Olympics and stay warm. It's from Fabricland.

I'm happy - no - I'm beyond HAPPY!!!  Why? Even though I had a ton of work to do, I decided to take a few minutes and convert the last piece of software to my new computer. I really should call it my desktop computer since it's not new. It was the software where I track the books that I've read. I've been using an older version since 2012 and - well - time to upgrade since I couldn't get the old software on the new computer and I've been using paper to keep track of the books I've read for the last month.

I had options - I could buy the software outright and it would stay on my desktop computer. I could buy a subscription and I could get access to my database on the internet. Hmmm - it was only a bit more money to get a three year subscription so that's what I did. My goal is to put my quilting books on a new database as well so I can check and keep track of what I have - that would be mind blowing!

I tried to upload the file of books that I have read and I couldn't figure it out. So I e-mailed the support team and within a few minutes, I had a response. If I send them the file, they would upload it for me. YIPPEEEE!!!  The first file I sent was empty. Oh brother. The second file only had 137 books and I knew there were over 400. I opened up my laptop and saved the file from there and sure enough, now my entire file is available to me in the new software which I can access from my phone or tablet or computer. I like that! Let's say that I'm somewhere - second hand book shop and I don't remember which is next in a series that I want to read and I don't want to buy a book that I've already read. I can check the software. Granted, I could check FictFact.com as well, but it's not totally up to date. I'm doing it author by author. So that was the big excitement for yesterday.  Oh - the software that I'm using is called Collectorz.  Their support is the best and they have databases for Games, Movies, Books, Comics and Albums.

Look at the stats - this is why I love technogoly. Just for the sheer fun of seeing stats like this. 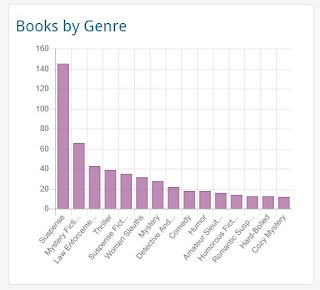 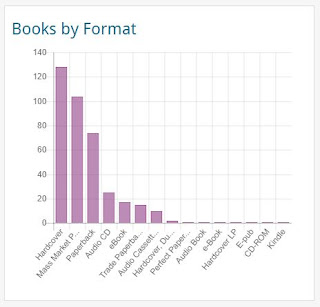 Yep - I like the hardcover or paperback. And by using the ISBN, you can even tell if the book was part of a book club. The one that I just finished was in fact part of the Double Day book club - the ISBN told me that. Isn't that cool?  Of couse, if I didn't have the ISBN, some of that last bit isn't true.

I haven't read a James Patterson in a long long time, but he's my most read author. I guess I read a lot of him a while back. Remember this is comprised of 437 books that I've read since the beginning of 2007.  Isn't that just the greatest? And a huge thank you to Linda who was the one that encouraged me to keep track of the books that I've read.  I'm super excited and now technically, I can put my laptop to rest. Actually BestBuy offered me cash for it so I'm going to take it in but not until I finished watching the Video series that I have from the library as it's on CD and the only other place I can watch it is on the TV and I would have to figure that out.

Not sure if I should say this, but my keyboard is working pretty well these days. Why?  Maybe it's finally loosened up. I sure hope so because it was getting tiresome to work on it. Some of the keys still have a mechanical, clunky feel to them, but it's getting better.

I got a lot done yesterday - not as much as I would have liked, but I made great progress on the applique quilt. All the pieces are assembled and with the exception of two pieces, they are sewn to that green background. That's awesome. Then there are five 3-D leaves to make and sew on and then to bind it. Thank god - I need to get this done. It should be done by Saturday evening.

As for the quilt that needs to be quilted? I had to put the last border on it! I know - what was I waiting for? Anyway - it's loaded on the long arm, the quilting design is figured out (I think) and I have all day scheduled to get it quilted.

I tell you - with all this snow and shovelling, it's cutting into my quilting time.

I also managed to finish the customer quilt finished yesterday - well I had to because the other one had to be loaded.

I used an overall daisy pattern on the quilt to match the daisy appliques.

I wanted to share with you my new light box. Actually it's called a lightpad. It's absolutely flat, it's 12 by 17 inches and I love it!! It's technically not new as I got it for Christmas a few years back, but it's time to dig out those tools and start using them. I used it for the applique quilt and it was so much easier than using my smaller one. It's the same brand as the one that I used for quilting, but that one is so small and the light is not as bright - this one is BRIGHT with LED lights. I love it!

There's supposed to be a Sit n Sew this weekend but with all the snow forecast, we need to rethink that. I wanted to show you that I'm very happy with my decision to keep those work tables clear. Not only does it make it a whole lot easier to tidy up when people are coming to sew, but I actually have room to lay out the current projects that I'm working on. That's the most exciting part.


It's empty except for the binding fabric that I need to cut and make the binding for the current quilt on the long am.

And here's the work tables. Not bad considering!  Actually a lot of this has already been cleared. It was bits of fabric that needed to be filed in the appropriate storage box or put back on the shelf as I'm finished with it. So I'm making great progress and I'm super excited about that.


I think part of it is working to finish things? I'm not sure, but I feel and appear to be a lot more organized than I've been in the past. And that's all good.

As I was messing in my book lists yesterday, I pulled the next book from my shelf, BUT I'm not allowed to start reading it until both of those quilts are DONE because I know I won't be able to stop myself from reading it.

On that note, it's time to get the day on the road.