A REST day!!! Could yesterday qualify as a rest day? I did take a couple of breaks - sat outside in the gazebo, had a scheduled Zoom call with friends. But that doesn't qualify as a rest day. I had a LOT of sewing to get done, and it's done, but I can't share with you - not yet. You'll see it next week, and I'm so excited, I could burst!

I also finished quilting the Trend-tex challenge, which took way longer than I thought, but I'm happy with the results. It's trimmed and ready to put the binding on later today. In an ideal world, it would be in the mail tomorrow, so I'm aiming for that.

Half of the homework for tonight's class is done. Well, it's more than half done, so I should be able to finish quickly this morning. Still a bit of prep work for tomorrow, but I'll make it.

I'm way behind on the writing, and I'm going to try and take care of some of that this morning!

Digital magazines are getting read and returned. I tried to take a screenshot or two, but I couldn't figure that out on my iPad. Let's say that I took the screenshots; now I have to find out where they are stored. I'll have to try my tablet and see if that works.

As usual, it's going to be a busy day - quilts to quilt, sewing, writing, and well - lots of fun stuff. It's going to be wet and cool today, so NO incentive to sit outside.

Speaking of outside, I saw this in the little garden beside the house. The tulips are growing like mad. Oh, where are the rabbits to eat those lush green leaves?

With all the squirrels and skunks in the neighborhood, I'm surprised there are even bulbs still in that flower bed. Do skunks eat tulips? I guess they dig for grubs or whatever. But let's say that someone loves to play in those flower beds, and I often find little holes everywhere. In this area and the front garden - thankfully, there is no grass.

Speaking of grass, I had someone come to our door yesterday to give me a quote on lawn care. That was easy to deal with - no lawn in the front and no lawn in the back! The guy hadn't even noticed that we have no lawn in the front!!
Speaking of salespeople and not paying attention, this happened the other day. Remember how I logged into a real estate website. I know - I SHOULD NOT have done that. I know better. Well, before I knew it, I had received two or three texts. I responded that I was NOT interested - I lived in the area and was being nosy. BEFORE 9 AM that same day, I received a phone call. I was mad, but I kept calm. I told the agent that I had already sent a text to say I wasn't interested and take me off the list.
Nope - I got more texts and more e-mails. I've blocked both. Good grief!! OK - I know that I have NO ONE to blame but myself for that, but I HATE super aggressive salespeople, and even if I were looking to sell, I would NOT hire this person.  And that's not so much for being aggressive, but for NOT listening. Do people get a notification if their e-mails/texts get blocked? They should!
I was upstairs the other day, and I noticed one thing that I haven't used all last year. My tote bags!! They used to be filled with projects and fabric, and gosh know what else in Studio B. Or they were being used to carry stuff to a class. Well, they are now sitting idle!
I had a peek in those drawers - oh my - a few things that I had sort of forgotten about. But you know what? There is a LOT of empty space in those drawers, and I'm tempted to consolidate the drawers or file what's in them somewhere else and bring the units downstairs. Perhaps next week when things have quieted down a wee bit.
Here's the best news - I'm actually finding EMPTY spots in my storage areas. YES - empty spots!! How is this happening? As things get sorted and organized and similar things get put together, a few holes appear. The trick will be to eventually get everything in one space - yes - there are a few projects upstairs that should be brought down. All in good time, but the good news is that it's getting better - not worse!!!!
I found MORE half-square triangles. Seriously??? Oh god - just shoot me now with those things! I found some that were sewn and need to be trimmed. I found bags of them that were partially sewn and need to be finished and then trimmed. And I found some that had not been sewn.
And this is what my ironing board looks like right now. WAIT - that's what it looked like yesterday! It's empty this morning. It had literally become a dumping ground as I was prepping things.
Here's the stack of half-square triangles that need to be trimmed or pressed.
And I'm almost finished with that group of teeny ones that are being trimmed to 1 ¼".
I trimmed my Trendtex Challenge while watching the awards ceremony for Cherrywood Challenge, and then I trimmed these. A few left to hopefully get done sometime today.
So yes, I watched the Cherrywood Challenge last night. Oh my -- the creativity of the winners was amazing. I'm totally blown away by the creativity, talent, and ideas everyone came up with. The first one, which was an employee choice, had over 6000 pieces in it. Good grief - someone had a LOT of time on their hands!  I can't say that the first place one was my favorite, and some were definitely not as pink as I would have thought they needed to be.
But it doesn't matter - the concepts were brilliant, and all the winning pieces were stunning. I did not expect to win - I don't have the time or the inclination to put in the number of hours required to create a winning quilt. Those winning quilts would have taken a LOT of time. Well, mine took a bit of time, but not nearly as complex as the winners!!  I need to find a picture of it, so I can post it.
OH -- here are the pictures. Here is my Cherrywood Challenge entry for Princess Diana. It's a storm at sea, and while there are not 6000 pieces in there, each of those little squares is 1" finished. So that was quite a feat to make that happen. I LOVE my piece, and I'm thrilled that it will be published in the book along with those amazing winning quilts. I did NOT find pictures of the winning quilts online. Not sure if they are going to post them. But I can't wait to see the entire show - I hope it gets to Canada, or I may have to take a road trip! No idea the schedule - if things go as planned, it's supposed to open in Houston in October.
Here's a close-up! In case you're wondering, ALL the seams were twirled on the back as there was a LOT of bulk in some places with all those points.

And to round things off, I finished off two pet mats, and they are now gone! 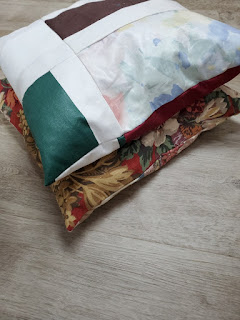 All around - a great day, especially with the weather, and I am feeling so much better. We should never take our good health for granted. I'm blessed with good health, and when I have a slight issue - well - it's huge, but I power through as there is no time in my schedule for sickness.
Well, I see it's pouring rain outside - hmm - walk the dogs or wait until the afternoon?
Don't forget the Virtual Retreat this weekend.

Here's the Zoom link for Saturday evening, which starts at 6 PM and goes to 9 PM.

Here's the Zoom link for Sunday, which starts at 10 AM and goes to 8 PM.

On that note, I'm out of here - loads of stuff to get prepped today and writing - lots and lots of writing.
Have a super day!!!!
Ciao!!!