FIRST -- I stand corrected!!! Yesterday I made a mistake. The interviewees did NOT get paid. That was very clear, but for some reason, I misinterpreted the information. I apologize for that. Thanks to a couple of readers who pointed that out. I've corrected my post from yesterday. What is disturbing is that while these people didn't get paid, the network paid $7 - 9 million for the rights to produce that interview, so someone profited. If you want to live a private life, then you should keep it private. You can't have your cake and eat it too.

OK -- now onto more exciting things. I'm so excited this morning!! Oh my -- I took my own advice to heart, and I've been organizing stuff. The magazines are DONE!!!

The floor is clear, and all the books and magazines are now back on the shelves. They are sorted by title. There was a pile of miscellaneous publications which I managed to find homes for some of them, and the rest went in a miscellaneous pile. Yes - the amount is obscene. I'm well aware of that. But I was attracted to the darn things, and many of those were picked up at guild garage sales. Some of them are very old!

The piles are labeled, and I'm thrilled. As I go through the piles, they'll be dealt with. I figure I have ten years to do it!


Someone asked me why the ends of the magazines and/or books were showing, rather than the more colorful spines. Well, it's all about space. Most of the shelves are too short for the books to stand upright. Magazines are better left lying down. I did rearrange one shelf so some books could stand up. I may do more rearranging at a later date, but for the moment, getting everything to this stage is HUGE. The shelves' height can be adjusted, I just don't have time at the moment, and I've never noticed it before.
I found ONE cross stitch magazine and a couple of duplicates. The duplicates are in my giveaway box, and if no one at the retreat wants them, they'll get tossed. I was going to give away the cross stitch magazine until I had a quick peek through it, and OH MY - I found something that is so cute. And I was looking for something like that, so I'm off to see what I can do about that.

We had a great time at Monday sewing. We've added some dedicated show and tell time, which is great as we now get to see all kinds of stuff that we never saw before. It's almost better than getting together in person. Our topics of discussion are vast! It's so great that we have Zoom to keep us connected. As I've said before, I'll be hard-pressed to go back to sewing in person.

And you would not believe how many times I get the same thing from the Zoom presentation that I'm doing. People who live in very remote areas can get connected. It's amazing and nice to hear that some positive things are coming from the pandemic.

I had made this block for Long Time Gone. I wasn't happy with it as I didn't like the light orange. It just didn't go with the other oranges in the block. I decided it was a perfect thing to do while on the Monday sewing call.

I ripped the block apart in rows at the bottom and replaced the light orange squares.
Then I sewed it back together, and now this block is done!
I still have a few things cut out and ready to sew together. One of them is a quilt backing which should be easy. The other is a quilt that needs to be sewn together, including the backing and then two blocks. So I've made good progress on that stack of stuff, but now it's time to add to the stack as the next homework blocks are coming due.
I also managed to get some tidying up done this morning. I'll probably be pulling some stuff today to get ready for this week's presentations, and I was running out of room. I made great progress with the tidy-up, and I'm happy!!!

Here's some stuff from earlier that I didn't get a chance to post. Yep - working with sequins and found a few on the floor! I love sequins, and I love sewing them on by machine, but they are easy to spill!

I got a customer quilt done. It needs to be trimmed, hopefully later today. And the next one is loaded, and depending on how this morning goes, I might work on it this afternoon.
One other thing I did manage to do was this.
YES - the design wall is clear!!!  Except for those two blocks.
I made these two blocks at the beginning of the pandemic from my orange and white scrap boxes. I had this brilliant idea that I'd have nothing to do! So I had great aspirations to make a scrappy orange and white quilt. HA!!!! I got two blocks done, and one year later, there they sit!!
What was on the design wall? My Summer Moon quilt, of course.
I love the quilt, and the photo doesn't do justice to the greens and purples in it. But that's OK. And I had to use several different shades of solid white, but you can't tell that either. I'm going to call this quilt the picnic quilt. I seem to have eaten a LOT of chocolate as I made the quilt. I think this is the THIRD chocolate stain I found on it. And when I was assembling the final rows, I found hummus that I had spilled on my shirt on the quilt. Sigh........................  I know - don't eat when quilting. The first thing to do when this gets quilted is to wash it!!
Then it was quick to search through the labeled backings to find something that worked.
As I remove one from the shelf, I have a stack in the stash room that would NOT fit on the shelf. So one by one, those backings are going on the shelf. There are six left to add. Once that is done, I'm sure there are other big yardage pieces in the stash buckets to add to the pile. What's so great about all this is that I actually see HUGE progress. Before, I likely would have gone out and bought new backings because I couldn't find anything due to the huge mess. No longer!!!!

See how all the backings are marked with the yardage? It's super easy to find something. 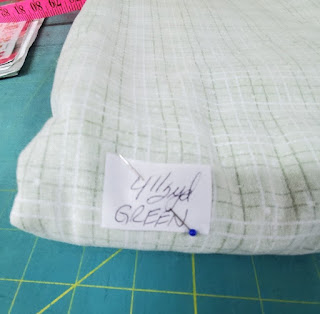 I worked on the scrappy binding at Monday sewing, and NOW this one is ready to go to the "to be quilted" pile. YEAH!!!!
It feels good to get that one done.  I still have lots more to do - that table of current projects is still piled high, but progress is being made and NOTHING new is getting added or bought, so I'm a happy camper.
I really can't believe that it took me so long to see what was happening. Like I was totally blind or something. It doesn't matter, I see the light now, and I'm doing what I can to get rid of the stuff, and that's all that counts. And at least when the day comes that I do have to get rid of it in a big hurry, at least I know what's there, and it'll be much easier than searching through tubs and tubs of stuff.
On that note, I see it's going to be a glorious day today. I can't wait to get out and walk. Yesterday, just minutes before I was to walk the dogs, we had a small ice storm, and the roads and sidewalks were treacherous, so we went out later in the day. Today, the sun is out, and it looks amazing!!!
Have a super day!!!
Ciao!!!!