I'm pleased to report that I feel much better this morning. Not 100%, but much better. For some reason, my neck seems a bit stiff as well. I tried a new pillow last night, had a nap in the afternoon, ate salty chips, drank lots of water, had a wee chat with the doctor (no need for alarm). Thanks to everyone who sent e-mails and suggestions. We'll just see how things progress, but I think I'll cancel my chiro appointment this week. BTW - he did NOT adjust or go anywhere near my neck, so this can't be because of what he did.

I have to confess that I haven't been doing the exercises he gave me for my back, so now that I'm feeling better, I might - MIGHT - try some later today.

If you do NOT belong to a Virtual sewing group - you need to! Why? Because as the others converse about many different topics, I find that I mindlessly work on stuff that I don't want to do!

Case in point, I had made a block for my Jen Kingwell, Long Time Gone quilt. It was slightly too large, and it would have been hard to trim it down or ease it in. So during the handwork Zoom on Sunday, I ripped most of the block apart. I was NOT looking forward to putting it back together again. However, with the Monday sewing group chatting in the background, I pressed the pieces, removed loose threads, stitched the seams' loose ends, and got the block stitched back together. I don't care how long it took - I was just glad it's back together. And this is why it takes so long to make anything!

The name of our group is Motivational Monday and YES - it's motivating!!!!

See -- I didn't really trim very much off the blocks, but once they were trimmed, it went back together like a charm.

And here's the final block. Keep in mind, those churn dash blocks are THREE inches finished. So putting all those little pieces together is a HUGE feat. I know that some of the class has struggled with these teeny pieces. I struggled with the pieces.
Once that block was finished, I decided to lay out the blocks on my design wall. I NEED more design walls!!!  And I worked on putting Section Two together for the Long Time Gone quilt. I can't tell you how excited I was when I saw this on the wall. WOW!!!!  That makes me happy.
Here are the other blocks on the wall in their approximate location in the quilt. I still have a bunch of pineapple blocks to make and one more set of small churn dashes. Yep - I'm a wee bit behind.

It looks a bit messy at this point, and that darn orange star still sticks out! SIGH...........  But I'm OK with it. I might try to incorporate a few more bits of that particular orange through the rest of the quilt so that it's not alone. It's like yellow fabrics - a BEACON.
And I have my little orange stool in Studio B that allows me to sit and contemplate what I've accomplished. However, it's like a freezer down there at the moment and not fun to sew. I might have to move upstairs for a sewing session.

I have the show and tell from the weekend, and I'll get to it tomorrow. I think there are 64 of us in this class, and as you can see - we're not done yet. However, the group is begging to start another Jen Kingwell class. So we're going to be called the Jen Kingwell groupies! It didn't take much to twist my arm to sign on to teach another one. I'm so excited - I want to start now. Not really - I can wait. There's so much to do that there's no time to start a new project.

If you're interested in participating in a Jen Kingwell sew-along, watch for a new class coming in the fall. It will be hosted by Thimbles and Things in Orillia - it will be entirely on Zoom. The project we're going to do is called Boho Heart. And because so many people wanted to do Gypsy Wife and I've started that project, I'm going to throw that in as well- as a bonus. Just shoot me now!!!

So that's super exciting!!  I have to come up with some fabrics for Boho Heart, but I'm sure I'll find something in the stash. These two will start in the fall, and if you sign up for BOHO Heart (the main attraction), you'll get Gypsy Wife as a bonus.

And some people want to do one of the applique qults by Jen Kingwell. So - that will likely take place starting in January and hosted by me. That one will be Sweet Tea and Green Beans. There's a "wee" bit of applique in that quilt and some more challenging seams and other techniques. That's for January!!!

If you have one of the books and want to join along - then WAIT!! I'll be posting the information on my blog when it's time to sign up. In the meantime - just hang onto the book (s) and start gathering your fabrics.

By the way, if anyone has a suggestion for one of these on-going classes, let me know. It's not even the end of March, and the schedule is almost full for next year. How did that happen?? OK -- so not almost full, but 1/3 filled, and we're months away from starting!

Are you looking for something to do that's quilt-related? Well, the winners of the Cherrywood Challenge will be announced this Thursday. 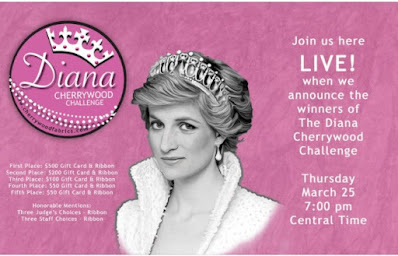 I have a piece entered in the contest - will I win? Not likely - the competition in this event is stiff. Everyone's ideas and workmanship are amazing, and I can't imagine how much work it is to pick the winners. I'm just excited that mine made it to the finalist list. But it'll be fun to attend the "awards ceremony!"

Don't forget the Virtual Retreat this weekend on Saturday evening from 6 - 9 PM and Sunday from 10 AM - 8 PM. I'll be posting the links tomorrow. If you have one of those blocks or something that just isn't working for you - this is the perfect diversion to get it done!!!

On that note, I'm out of here. I've got a full day of writing, quilting, and presenting today, and there's no time to waste! And it's going to be warm again today, so I'm sure I'll sneak out to the gazebo for a bit. I'm reading a great book on making things with your hands. More on that another day.