It's all about COLOR

Oh my - so much happened yesterday, and I don't think I'm going to get to it all. As promised, though, let's talk about those Cloth Paper Scissors Studios magazines.

The magazines came out quarterly, and I seem to have purchased them all. The time frame is 2010 - 2014 or something like that. Here's the cover of the one that I'm just finishing.

Yep -- do you remember Ty Pennington of Move that Bus (Extreme Home Makeover) fame? I wonder if he's still around? Yep --- with a much more grizzled look.
This publication is filled with many different studios from people worldwide with different hobbies—lots of jewelry makers, mixed media artists, sculptors, and some quilters. I've seen lots of amazing studios that I would LOVE to work in and others that are a bit too artsy for my taste. But there are little tidbits to be gleaned in it all. And they are entertaining and mindless to read.
One of my favorite fabric storage systems came from Brandy Maslowski - a fellow Canadian. This is the same issue with Ty on the cover. Long gone as the date is 2011, I think. 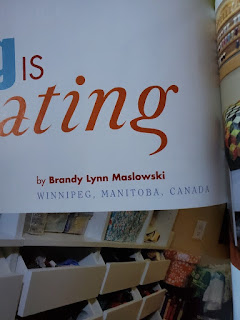 I believe this drawer system is from IKEA. Isn't that awesome? And while it takes up some space, it seems like a very efficient use of space. 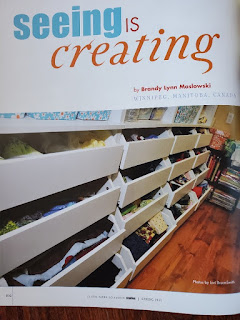 And here's a shot of her entire studio with those cabinets on the left. Yep - I like that idea. And if I were starting over, I might consider that option. 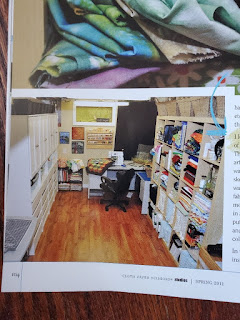 But here's something hilarious. In my sorting process, I found an old copy of This Old House. Why was it with the quilt magazines? No idea. But it's from 2003, so it's been around for a while.
Now let's have a look at one of the headlines on the cover.
And then, 8 years later, look at the headline on one of the Studios magazines. 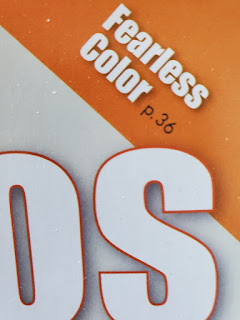 Here's the issue where the headline came from. 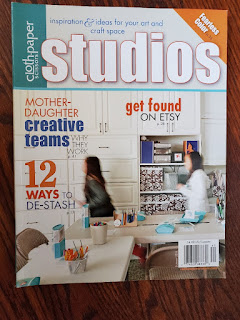 I know they are not called headlines, but what the heck are they called? The enticing verbiage on the front makes you covet the magazine only to find that the article doesn't really give you any meat. That drives me crazy, yet the promise of something good hooks us into buying.
Anyway, it seems that whether you're a crafter, quilter, or decorating or anything, that people are afraid of color. And how many times have I heard that people have no idea how to pull colors together. People are NOT afraid of color; they seem to be afraid of committing to a particular color or fabric.
I don't know how many times I've helped people, and I pull something, and they go - "I don't like that". How about this? "No - I don't like that." So people know what they don't like - then go and search for what you do like!!
And if you see a particular color combination that you love - it could be from an ad in a magazine, a flyer that comes to your door, a photo that you took, or someone else's quilt. Save those pictures in an inspiration book and next time you need to pick colors for a quilt, go to the inspiration book first. You'll find just what you're looking for.
Sometimes people also get into a rut when they buy fabric. They buy the SAME thing over and over again. And fabric designers make it super easy to do that. A couple of designers come to mind - Bonnie and Camille (different prints, but the coloring of all their collections are pretty much the same), Me and My Sister (same thing - probably 30 different collections, yet they all look the same except the print changes), and there are WAY more out there. So if you get hooked on one of those, don't be afraid every once in a while to step outside your comfort zone.
These are two different Bonnie and Camille collections. Seriously? They look very similar. The formula is the same. And we keep buying MORE of this same stuff! Why??? 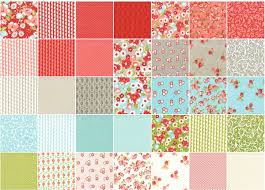 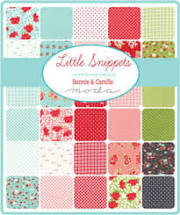 The other thing I'll say about fabric designers - just because they made 40 beautiful fabrics - it doesn't mean that they all work together. I've seen MANY collections that just don't work together. There's usually some odd thing in there that just sticks out. Why??? Particularly the lights and darks. They don't know how to make the very light and the very dark work in the collection.
As I flipped through This Old House, I saw this ad for a refrigerator with an entertainment center in it. I think this has died with the popularity of the tablet that can be taken anywhere. Or am I missing something??? I never really pay attention to this stuff.
On my afternoon walk, I decided to take a shortcut through the forest to see the condition of the path. It is NOT maintained in the winter, and that is clearly stated at all entrances. It's a disaster still with lots of ice. I was happy when I reached the end of the path. I will NOT be taking the girls through the forest for a couple of days. We have some HOT temperatures coming this week,  so it might be good by the weekend, but then it's going to be muddy.

You do NOT want to know my thoughts on that interview last night. They remind me of a couple of spoiled children, and I do not have one iota of sympathy for either of them. While the couple did not get paid for the interview, the network paid a LOT of money to air the story, so someone profited from this. They are as far away from living like normal people as they can be. That's all I'm going to say. I am very disappointed that that interview came out the night before National Woman's Day.

Well, that's it for today - it's Monday sewing, and we've got a great show and tell from many people.