I'm in big trouble. The weather has turned warm, and I want to be outside all day! I did a bit of yard cleanup yesterday - no jacket! I sat in the gazebo for a bit, and after my walk, I sat in the yard eating my snack. Oh yes -- bring on spring! It's going to be even warmer today! I know - that we could still get snow - I know that.

The fish were up basking in the warm surface water. They are far from hibernating! I had a total of three dead fish this winter, and as you can see, many survived. There was still some ice on the pond in the morning, so they were congregating around the heater.

But as the temperature warmed up and the ice melted, they were everywhere. Silly things - I'm NOT feeding them yet.
I had to stop by the library, and the Canada Geese were out in all their glory as well. Do they ever go away in the winter? I seem to see them all the time. But there are definitely more of them now. 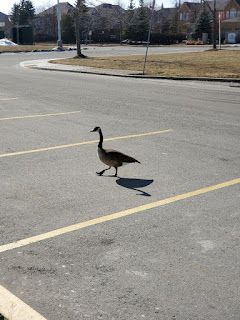 Oh boy -- I need a fact checker!!  I was looking back at these cabinets in Brandy's studio. In fact, they are from Debbie Travis, NOT IKEA, but I'm sure there are similar cabinets out there. It was the cubbies on the other side of her sewing space that are from IKEA. I'm not sure Debbie is designing furniture these days. Anyway - the storage system is PERFECT for a quilter—the best I've seen anywhere.

The other day, I had a bunch of 3½" floppy disks to go through. YES -- do you remember those? I have a 3½" drive that I bought years ago so I could read the disks. Why do I have floppies? Because my original embroidery machine used a 3½" floppy disk, and while I no longer use that sewing machine for embroidery, some of my files are still on floppies.
What did I find? Oh my - it was quite a trip down memory lane, to say the least.
The day didn't start well. The first floppy I loaded gave me an error message.
That did not set a good tone, and I thought that the files wouldn't work with Windows 10, but that's silly.
When is the last time you saw this in your file structure?
Then I had to remember that the file structure for the Husqvarna Viking Designer 1 was in four menus. So I had to check each menu to see if there was something of interest in each one.
And I had a laugh at the dates. These were recent dates compared to some of the others that I found. I found files from 1998, and I think the earliest I saw was 1994, which technically was before my time, but that's when the files were created. Good grief!!!
I found FOUR photos. This is Rocky and Sparky. Rocky was rescued from a family that was moving to England, and they couldn't take Rocky. Let's just say that we rescued him. He lived with us for at least a year before he went over the Rainbow Bridge. It seems that he got along well with Sparky. It's funny; I never remember Sparky having such a dark face. I moved those photos over to my photo folder.

So I had a stack of floppies to go through.

Some of them were labeled. 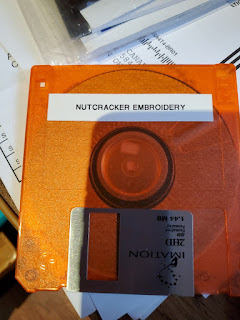 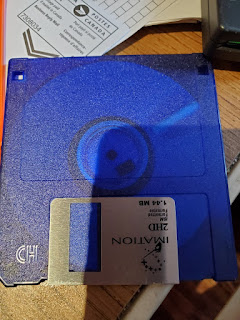 Some came with a printout of what was on the disk. Others did not. I must have had someone help me at some point with these files because some of them had been modified. I certainly did not have the knowledge to do that at the time.
Oh my - here are the files with the polar bears. Two of those designs are on the fleece mitts that I wore this winter.
I'm learning how to use my filing system for the embroidery files. It's a HUGE learning curve for me with all this software stuff. I've still got a long way to go, but I'm advanced by miles and miles as well. That puts me in dangerous territory!! The more I learn, the more fun I'm having!
As I was going through the files, I came across some specific embroidery files. What are these?
OH MY -- there are the files that I put on my parent's 50th Anniversary quilt. In 2004!!!!  I didn't need to keep those files. They just recently celebrated 67 years!!!
And then I found a file that I created for my grandparents' 70th anniversary. My grandmother had just recently passed, so technically, they didn't make it to 70, but close enough. I'm not even sure what this got put on. I have an idea and need to dig it out later today, just for my personal satisfaction.
I found a file with four little lace stocking ornaments. 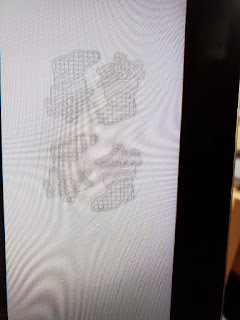 That went as well; I have the original files - I didn't need this one with four of the same in it.
What did I do with everything? I copied all the files to my hard disk in labeled and sorted folders. I kept the original floppies and put them and the documentation (if it existed) into a presentation folder. Nice and neat.
The floppies that had nothing of value on them? In the garbage. 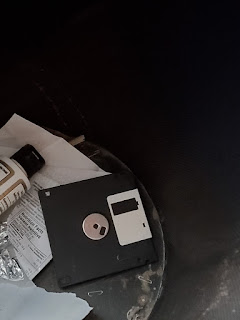 I still have some other disks to go through, but at least those are in packages, so I know what they are.

I have a printout for an embroidery font alphabet that I bought, and that's really what I was looking for. I did NOT find that, but I keep meaning to check the project box to see if the disk is there.

OH MY -- I just checked the project box. It's FILLED with all kinds of embellishments. This project isn't even on my UFO radar screen. It should be - it's super cute, and I think most of the work is done. So now the dilemma - do I skip the UFO line and take on this project? I did NOT find the disk, but I found my ¼" bias tape maker and a TON of other stuff. Oh my -- I should take it on - just because!

It's Wednesday and I've been lax in handing out a decluttering assignment. How about your software? I know we did this before, but what about all those rogue disks?? Do you know what's on them? I'm determined to find those darn letters so I can finish that UFO.

Well, on that note, I'm out of here. I've got three presentations today, and most are ready, but a bit of tweaking and a couple of samples to make. And I MUST get outside!