We have heat again! We had heat in the house, but it wouldn't go above a certain temperature. The technician was shortly after eight and made several adjustments, and YES - I needed to clean the filter. It amazes me that since we now lease the furnace, the company is NOT pushing down our throats to have it serviced. When we owned the furnace, they were on us like a dirty shirt to have it serviced twice a year. I'll be making some notes in my calendar to get that done.

And it's probably about time we got the ducts cleaned. Now, where are those call centers when you need one? I'll be making my own call for that!

I confess that I needed a nap yesterday. Not sure why - I'm getting lots of sleep, but maybe it was the stress of the deadlines? Well, a new week has started, and I've got more deadlines, so I had better get myself together and start prepping!

I pulled a quilt backing from the shelf the other day. It's flannel, so it took up a lot of room, and it's now washed and ready to make into a backing. I could put the last piece of backing that was sitting out away.

All the big yardages for backings are folded and labeled on this shelf. Well, a shelf and a half, but so easy to find something.
While waiting for the technician to arrive, I went through my blue baskets of fabric to see if there were any other large yardage pieces. I'm looking at anything that is 3 M and above. I will go through ALL the fabric baskets and pull out those large yardages as they will make a good backing and eliminate stuff from the basket.
I've shown you before, but this is how I shop for fabric at my house. I find an empty table and tip the basket out, which goes into a nicely organized pile.
Then I start by putting it all back in the basket, still in an orderly fashion and all folded.
I was also looking for something else I knew was in the blue basket, and the pieces I wanted to keep got set aside on the far left.
After rifling through the two blue baskets, I found what I was looking for (the border print) and ONE piece over 3 M. I've been through the orange baskets and now the blue. So many more to go through to see what other backings I can find.
That's stage one of sorting through the baskets of colored fabric. Then when appropriate, I'll start going through and pulling some of the prints I'll never use and grouping them into kits for Diane. But we're a little away from that.
Here's the blue border print, which I have plans for! 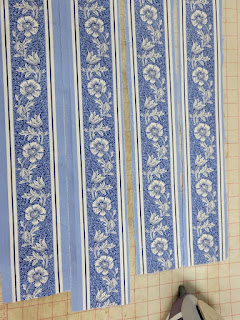 And even though this is far down on my list of priorities, I pulled out two jigsaw puzzles I intend to finish over the Christmas holidays.
I had an accident with a sewing machine the other day. Well, not an accident but an incident. This is what happened. I wonder why the needle bent rather than broke? I was using a less powerful sewing machine, so perhaps I was going slow, and the lower level of power in the machine accounted for this?
This is how the dogs are when outside. While it wasn't cold yesterday, it was blustery, and Murphy was quite happy to lie in the snow like this. She looked so forlorn as I made her go out and get some fresh air!
Lexi, on the other hand, likes to curl up! Right out in the open, I love how that nose gets completely covered, but those ears are like antennae!
Her other favorite pastime when outside is to sit at the fence and look on the other side. This allows her to watch people walk on the path; now that the leaves are gone, it's much more open. And then occasionally, a fox, skunk, or raccoon will wander by, and this causes them to go into a frenzy.
Murphy is absolutely fascinated by moving that bed out of position or pulling on the quilt in the bed. And I swear, when she stops, she's posing!
And boy, does she ever love the TV. She recognizes the word now because when you mention the word, she looks at the TV. The best parts are when a dog or other animal appears on the screen, or she recognizes the music and runs if it's one of her favorites!

However, Lexi isn't as skittish as she used to be. Yesterday, when I walked them separately, we passed a couple of inflatables, and Murphy was startled and barked her head off. When I passed by with Lexi, she looked and went right up to sniff them. Before, Lexi would have freaked out and backed away. I tell you, the older she gets, the bolder she gets!

Well, it's off to spin class this morning! And then Monday sewing and then lots of work! Between the computer and the sewing machine, I'll be busy today! But then, when am I not busy?