There is NOTHING new!

Oh my --- I love Tammy's comment about advent calendars! This is my FIRST-ever advent calendar, and it's a quilting one. They are pretty pricey compared to other advent calendars. I'm sure I'll get lots of stuff I don't want or need, but it's the fun of having something to open.

However, after some research, I've already decided that this will be my first and last quilting advent calendar. There are MANY other options, and they cost a fraction of the price. You'll have to wait until next year to see! I may have to make a note because I'm sure I'll forget!

I need to call the furnace repair people as I don't think our furnace is working correctly or the thermostat isn't working. Despite being set to 21 C, the room temperature is 19 ALL THE TIME. And there is no hot air coming out of the vents. It's a new furnace, so I must call and book an appointment before we all freeze to death!

The writing is coming along nicely, and so is all the homework for class. I have three sessions today, and all are ready to go -- well, a wee bit of work sorting slides on the last one. And there's plenty of time to do that! My poor computer is as messy as the house is. I've no idea how many windows are open in Chrome. There are too many, and the poor computer is struggling. I know -- reboot, but there's no time to reboot! I should take it in and see if I can get more memory! I need LOTS of memory!

And Murphy is surveying the filing system in the office and is not too impressed! Me neither, and my goal next week is to tackle this mess.

I started the second book in The Seven Sisters series. ACK! I believe this is a different narrator than the first one, or she is using a different accent, and it's taking me some time to get used to it. Or perhaps, it's just me! The whole series is quite a concept as it starts each sister from the same point but shows their viewpoint. Then it goes onto their story!
Speaking of stories, I borrowed this book from the library and thought it would be interesting. However, I've read a couple of the essays or tried to read them, and I don't find them inspiring! I HATE when someone writes about the historical or religious perspective of the journey/pilgrimage --- NO -- I WANT their take on it. Not reiterating historical information. Sadly -- I'm returning this one to the library and only read one story about the Camino, which spent most of the time talking about their knee and hip replacements. Which is OK -- it's just not what I expected. 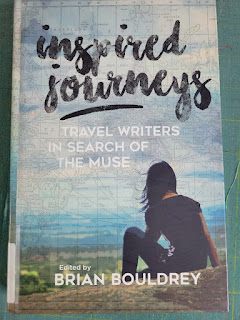 So here's a blast from the past. Amid everything else, I'm trying to read some of those quilt magazines. I don't know why I thought it was a great idea to buy as many as possible at guild quilt shows, so I've ended up with tons of older magazines. Yes -- -I could just toss them, but you know what? It's been interesting to read them.
And I've learned that there is NOTHING new in the quilting world, and be careful what you read! I knew both things, but these examples make it very clear!
So this is an issue of the Quilt magazine.
Look at that date! I wasn't even quilting at the time!
Remember when we used to advertise quilt shows in magazines? Back in the early 2000s, when I organized a quilt show or two, it was essential to get your quilt show in the magazine listings!! How times have changed!!!
And remember how we could swap blocks and charms with other quilters. That started in magazines!!! And I'm laughing as I read these letters sent in by quilters. The magazine published them VERBATIM, including the parts where the quilter explains they have three daughters, their names and ages and that she would like to make a quilt for each and wants to trade squares. The best part? Her address is right there!!! And we talk about privacy issues today!!!!
Notice the pictures are in black and white, and a good part of this magazine is printed on newsprint!
Here's a disturbing read, and NO offense to my American readers. But this paragraph comes from an article written by a quilter who explains why she loves magazines and what she has learned from them.
Someone with a limited perspective on the quilting industry wrote an errant article. And we wonder how untruths happen!!!!
The International Quilt Festival was in full swing, and look at this quilt made for the show.
Quilt guilds were helping others as they do today. Either making quilts for those in need or using quilts as fundraisers, which one person stated is an EXCELLENT way to raise funds. Well, it used to be, but not any longer. Too many hoops to jump through to get a license, and not enough people interested in the actual value of what we do!
Here's an EARLY long-arm ad from American Patchwork and Quilting. The big deal was how LITE it was. But that looks like a pretty big machine (the throat space) even back in 1993. Now we wouldn't even think of the weight of the machine, but the smoothness, the throat space, and what bells and whistles it has are more important!
But look at those colors. The magazine has a few colored pages highlighting the SPECTUCALR FALL COLORS. Oh my --- those are a tad bland! 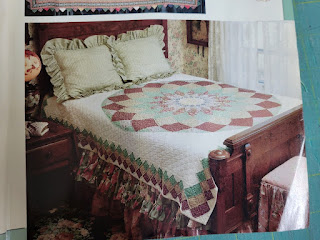 Thankfully, we've moved on from there!!!

Is it a waste of time to read those old magazines? Probably, but for the entertainment value and to see what was important at the time, I think it makes us appreciate what we have even more! So -- yes -- I'll continue to read those older magazines; when I'm done, they will be recycled, and they will not be passed along to someone else!

And I had to laugh also as the quilters exchanged charm squares. Yep --- LONG before Moda came out with their version of Charm squares. So if you think Moda created pre-cuts -- think again. They packaged them from their fabric collections BECAUSE quilters were doing it on their own. Moda saw a way to market that concept, and VOILA -- the official CHARM pack was created.

Yep -- NOTHING is new, yet some of the new quilters are amazed at what techniques their quilting idols INVENTED. Nope -- they likely read an old magazine or book and decided to bring it back. We more experienced quilters know that, and we can just sit back and have a quiet chuckle!

Well, on that note, it's time to get the day moving!