A walk in the flowers

It was another LONG exhausting day; however, I listened to another page-turner audiobook, and I didn't want to stop. But I was so tired that I was falling asleep, even listening to the thriller. I tried listening to the rest of it this morning as I was prepping my presentation for the classes, and I had to stop because it was distracting me. OH! What a great book -- another page-turner by Shari Lapena -- The End of Her.

I may have to listen while walking the dogs this morning. Again -- secrets and families -- are NOT a good mix. So if you have family secrets -- watch your back!

A super productive day and I'm pretty pleased with the results. I'm not out of the woods yet with deadlines, so there won't be any celebrating today. Two more things NEED to be done by Sunday PM. NO -- make that three things! But it's all good, and I shouldn't be rushed to get them done.

Everything is ready for this morning, and I must say that with technology, I'm getting much better and faster at taking and editing pictures and making up the presentations! Yeah me!!

I did not have a chance to tackle those few items on the cutting table. There was NO time for a break yesterday. OK -- I did sit outside for a bit. Not because I wanted to, but because I needed to make a call, and yep -- the phone isn't working correctly again! So I need to go to the store, but that won't happen until next week. When things are a bit more relaxed.

I have to fly for work (and pleasure) in a few weeks. It was a trip that started out entirely as a pleasure trip, then turned into a work trip for part of it. Thankfully, in the same city that I was going to be in. However, it required that I make a change to one of my flights. I HATE making all those travel arrangements, as it's not my thing. I kept getting notifications from Air Canada that my flights had changed due to their scheduling or whatever, and I needed to accept or change my flight. Since I knew I had to change one flight, I was waiting for confirmation of the dates. I managed to change the DATE of my flight at zero cost!

But now, since I have a specific timeline to follow, there are a few more changes to make and another flight to book. I'm NOT good with that stuff. Where's that darn admin??? As much as I hate doing that, I'd have a hard time letting someone else do it. I learn so much in the process!

Here are some wise words of wisdom that I found on the internet somewhere. 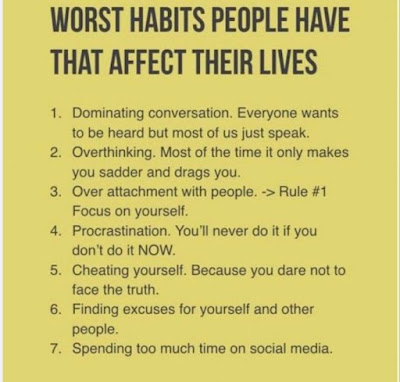 Honestly, it's like someone looked inside my head and wrote down what's inside. I see some people stuck on any number of those things. It drives me NUTS because I wouldn't give two thoughts to what some people consider earth-shattering. YES -- we all march to the beat of a different drum but go back to that rule of FIVE. In five seconds, will it matter, in five days, in five weeks, in five years, etc.?

I will admit that my biggest fault is number one. I do tend to dominate the conversation at times. I try to sit back and let things go, especially when I think I know better than someone else. I'm trying -- and I'm going to stick a sticky note to my laptop (for Zoom) to remind myself to sit back.

OK -- I have a few issues with number four, but I'm working on that. I'm much better than I used to be! The rest --- I never overthink EVER. I'm the number one focus in my life (well, maybe the girls come first sometimes!), I never cheat myself, I'm the first to admit I made a mistake, and I detest wasting time on social media! I love that list!

I also no longer save things for a special day. Here's one of my fancy bike teatowels that gets everyday use. I don't think there's a single thing in our house that we're saving for special occasions. To me, every day is special. My bike tea mugs get used every day, and I rotate them one day, it's this one, and the next day, it's the other one.

I will say that some things don't get used because we have too many of them. Too many cups in the cupboard. There are only two of us, and unless one of us starts to break things, we have too many. The same thing with clothes -- I tend to wear the same things repeatedly, and there's stuff in the closet that needs to go. I should do another cull one day!
OK -- I think I mentioned that our local grocery store is undergoing renovations. And they've moved the Starbucks from the bookstore (many Starbucks locations closed forever during the lockdowns) to the grocery store. The way the grocery store is set up, you come in one door and out the other at the other end of the store. As I walked Murphy past the store yesterday, I saw the sign, and it got me thinking. 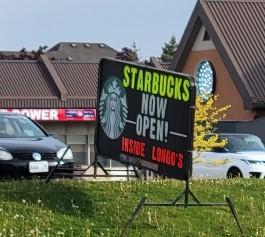 The coffee shop is at the ENTRANCE to the store. If you were a shopper, wouldn't it make more sense to have it at the EXIT? Who wants to walk around with your coffee in hand while you push a cart and grab groceries? And do I want to see spilled coffee on the groceries? I'm guessing they sell goodies as well -- well, wouldn't it be cheaper to purchase a pack of cookies from the grocery store rather than buy an individual one from Starbucks?? I don't know, but this doesn't seem well thought out. Or is it just me?
I don't have my tea until I'm back in the house after walking the girls, so I can sit and enjoy it with a couple of digestive cookies.
As I walked the girls yesterday, I snapped a couple of pictures of flowers. Here's a dandelion in the seed stage. Hmm -- that's probably not the proper term, but I am fascinated by this stage of the dandelion. It's so delicate and beautiful. They are everywhere at the moment. 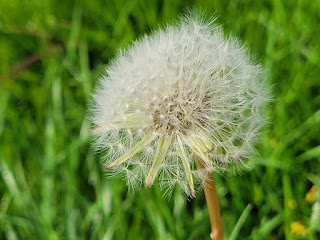 And here's a flower so the bees will still be happy. 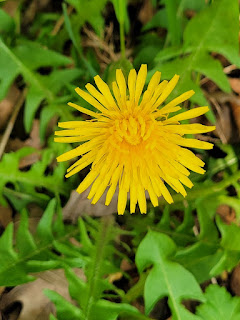 And I spotted one lone tulip in the forest. Now, how the heck did that get there? It's beside the sidewalk, and I bet a squirrel dropped it!! 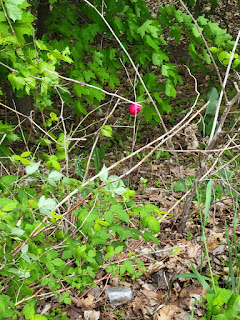 We've seen a lot of wildlife lately. Two days ago, I spotted two skunks on the walk. Of course, Muphy can't handle herself like a lady when there are skunks around. Either she or I have learned how to get her back in control much faster than before, but she still freaks out.

Then we spotted a fox the other day with breakfast in his mouth. Well, Murphy went ballistic. "MOM - I NEED to play with that." It took a lot of convincing, talking, and leash pulling to get her back on track. The next day, the fox ended up on our front lawn, and she almost crashed through the window in an attempt to get at it. Sigh......................   She is better -- that's all I can say.

It looks like a blistering, cold, windy day outside, but I just stepped out, and it's warm! But it might rain. Umbrella or not? I don't trust the weather app!

On that note, I'd better get moving as my first Zoom starts at 9 AM. It's an exciting day, to say the least!! And there will be some FANTASTIC show and tell tomorrow.

Now, where are those earbuds?