I love it (NOT!) when the connection isn't good on a call -- "Can you hear me? Can you hear me now?" Well, that has happened mostly on Zoom calls. Now, however, it's happening on my cell phone. In the last several days, whenever I'm on a call IN THE HOUSE, I cut out, and I go outside to take the call. Not always practical. What is causing this issue? No idea, and it's going to be something challenging to diagnose.

I would love to walk into the cell phone store and tell them my problem, and they just hand me a new phone. But the reality is they will likely give me a loaner. I'll check it out and see -- I may have bought a protection plan that will allow them to immediately provide me with a new phone. Once I download my pictures, I shall walk over to the mall to check it out, as it's pretty annoying.

So you know the struggle I've gone through to get that sewing room of mine in order. It's taken years to make it happen. Little by little, I whittled away at the mess. While there is still LOTS of stuff in that room, it's organized for the most part. The cutting table has always been an issue, and I remember when I had two cutting tables back to back, and BOTH of them were jammed with stuff. I literally had a 12" square on the corner of one of the tables to cut. I wish I had a photo of that mess.

I've made progress in leaps and bounds, and I'm happy to report that this is the condition of my cutting table after several days of work.

There are a few odds and ends at the far end, some of which need to be trimmed, and there is one project box for the project that I'm currently working on and my lists. This is amazing, and it's a thrill to work in that space. Things aren't falling on the floor, and the mats are available when I need the space to cut. Although I need to switch the mats around and use the new one on the right instead of the left, which is pretty much toast.
I even find myself going around the sewing machine stations and cleaning up the threads, and putting the tools no longer needed away. How often do I do that? EVERY DAY! I'm obsessed with keeping the space neat and tidy, making me feel happy. And I'm in full-blown sewing mode right now, with several deadlines this weekend. I've no idea how I survived all those years in a mess. So life is good in the sewing room. There are a few more areas to tidy up -- well, really just that current projects table, and I'm whittling my way through that.
As I've mentioned, my calendar is also clearing up, and I love looking at those days and weeks with NOTHING. I still have loads to do, but the deadlines will be gone. Self-discipline will come into play, and I will need to motivate myself since there is no deadline to get these projects done!
Every Monday during our sewing day, we have a show and tell. And I start it off with a crazy sewing machine. This past Monday, it was this machine that I thought was cute.
Then I had a closer look at the photo and saw the words "Game Boy" on the sewing machine. What the heck is that all about? Jaguar is a Japanese company that makes (made) sewing machines. They made it with their brand on it, as well as for other companies, including Singer!
You connected your Game Boy Color to the sewing machine with a cord. Then, with the Game Boy cartridge, you had access to various sewing machine stitches. I guess they thought it was faster to incorporate the brain of the Game Boy into the machine rather than put the brain in the sewing machine. From what I can tell, this was about 1990.
Then they advanced to a model with a dedicated spot to put the Game Boy. Doesn't this remind you of stitch and embroidery cards? At least that's how Husqvarna Viking did it! Apparently, the embroidery designs were Nintendo -- Mario, etc. Of course, they were!!! How cool would it be to have one of those? Anyway, here's a story about it if you want to check it out.

I would never have learned that if I didn't go looking. It's amazing what you can find on the internet.

Remember when Lexi's leash broke? Well, the metal hook that attaches to her collar fell apart. I found a replacement online (NOT at that store!). It was a small store in Eastern Canada. The shipping was $20, and I thought that was a lot for the three hooks that I wanted. So I contacted them, and I got an immediate response. The $20 included tracking during the shipping. They offered me two other much cheaper options.

I chose the cheapest $5.00, including the package to ship it in. I must say that I had a bit of an anxiety moment. What if the store didn't ship it or the package went astray, and I'd have no proof that it was even in the mail with no tracking. Oh -- believe in the system and believe in people! So I did!

This week, the package arrived.

The hooks were well packaged.
And here are my three hooks. Now I can take them off to the shoemaker so he can repair the two leashes. 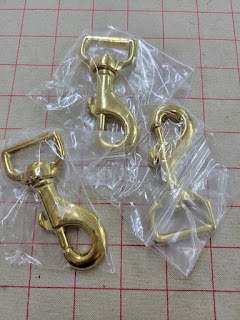 I do NOT care that this cost me perhaps a bit more than buying a new leash. I'm looking at $30 to replace the leash, so it's probably cheaper to have it repaired because I'm getting TWO leashes repaired.
I sent them a note thanking them for the fantastic customer service. The company is called Leathersmith Designs in Dartmouth, Nova Scotia.
I have finished reading the book about the monolithic online store. It just blows my mind, and again if only 50% of the book is accurate, we are in for a HUGE awakening one day when they have bought or crushed all the small competition, and we have only one place to shop. I know that's a bit dramatic, but given what they've accomplished in a short time -- don't be surprised.
And interestingly enough, the author of the book said it doesn't make sense to boycott that online store. Nope -- just support the small local stores, where the MONEY stays in our local communities. I'm trying very hard to follow that philosophy and always have. Support local! It's incredible how much power they have -- over the consumers today and the government. And it's not just because you buy from them - it's the DATA they are collecting on you, your buying habits, visitors to your house if you have one of those doorbell cameras (or even when you come and go), and what you say in your house with your smart speakers (I know -- ACK!). They now have the power to CHANGE how you buy, what you buy, what you see on the internet, EVERYTHING. BUT only if you let them!
The author says they are no longer a product company with physical products, but you, the consumer, are now their product because they can manipulate you because of the data they collect and change your habits! And we've already seen signs of that. There are other ways of avoiding them, but it is becoming more complex as their reach expands, and I'll share some of those ways another day.
The weather here is quite wet. Look at what I spotted on the deck yesterday. Murphy must have been out there, and it started to rain, so she came in.
And, of course, we played ball while I was on a call, and then she deliberately dropped it under the deck. That is one intelligent dog. It's not enough that I threw it, but no -- I have to retrieve it as well from challenging spots. Oh, Murphy!!! 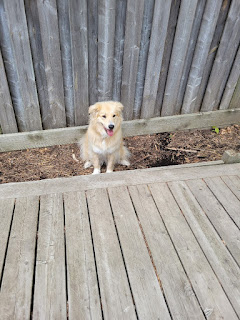 Other stuff happened yesterday, but I've run out of time. As a matter of fact, I'm now late because I rambled on!