I certainly live in a vacuum. The book I'm reading - Looking for Jane?  -- That's a REAL thing, although the book is fiction. This book is even more timely, based on events that are currently unfolding. No wonder there's a waiting list, and I need to finish it in five days, which I will.

So we had a wicked storm pass through on Saturday, and there was NO need for the weather app to know that we would get rain.

I was busy working inside and didn't really know anything was happening. I came out to play ball with Murphy and saw that the trees in the back were blowing around like mad. 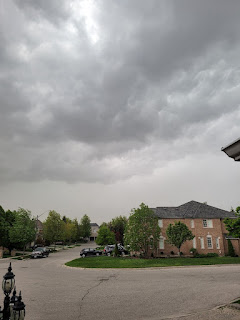 And then it was pouring rain and windy like mad. Thankfully, it didn't last long. Note the election sign that blew into our drive. A reminder to vote? Or can I snag that for the bottom of a tote bag? It's MINE now. 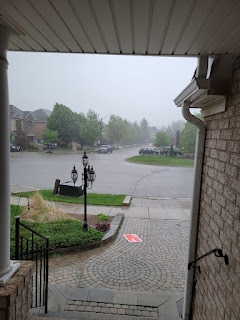 We didn't have much damage. I noticed that the top lattice on one section of the fence needs to be renailed, and I'll do that this coming weekend. There were several trees down in the forest, and I don't have time to share them with you this morning, but I will tomorrow. It's fascinating to see what happened to the living trees in the wind storm.
Seriously?? I was sitting at my Zoom table, and guess what I found? Yep -- A GOLD thread. I thought that was all gone!!!
I had a crazy day yesterday -- another long one, and I won't go into the details, but one project got completed at about 4 AM this morning. Don't worry -- I did get to bed and then up very early. The second one did NOT get done, and it's not my fault. A little repair job needs to be done on a customer quilt, and I had no time to fix the open seam and the resulting mess yesterday. That's a job for later this week.
The cutting table looks like a tornado hit it, and it will have to wait until later this week to be tidied up. Yes -- I'm off for a couple of days, and I almost hate going away because it causes such havoc on my routine.
When I'm back, I'll share what Studio B looks like -- after I tidy up that cutting table. This project of orphan blocks has been sitting on my design wall for a couple of months, and I'm not going to get to it, so it got put away.
I have quite a few orphan blocks, and I need to do something with them. I like this quilt layout above, and there are other blocks to go with it.
It all got bagged and put on the shelf in Pandora's closet. 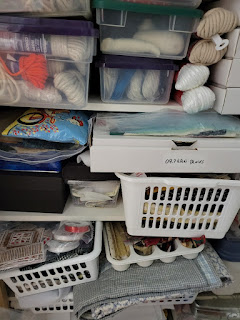 That left room for a current project -- Wonderful Woodland. It's nice to see the ongoing projects on the wall, and this one will be finished in July. The design walls are slowly getting under control!!
When I searched for something the other day, I happened upon this pair of shoelaces. Good grief -- they were bought at the Co-op, which means they were probably bought MANY years ago when I lived out west. 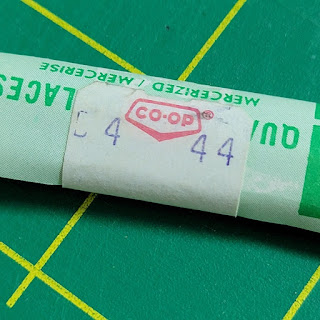 And could this be the price? 10 cents? Nothing costs 10 cents any longer. They are practically an antique! 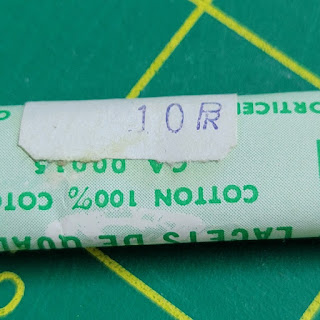 And I finally baked another cake the other day. It would not pass the high standards of Paul and Mary. Oh my -- there's a wee bit of flour on the bottom. But that's because I had put a bit of flour in the cake pan. I don't have a sifter -- it's a long story.
See -- some of the bits of flour are still in the pan. And I was skimpy on the amount of butter I used to grease the pan. I know -- lots of things to learn! 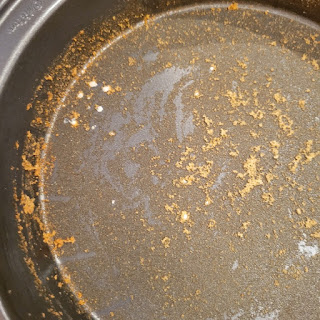 So -- the only eggs I had were double yokes. Now, why did the chef buy those? Because he didn't pay attention, but no worries -- let's forge ahead. As I was whisking the sugar and the eggs, I realized that if I were going to bake like this regularly, I would NEED a Kitchen Aid. There is NO way I whisked it long enough to get enough air into the cake, and that's way too much work. 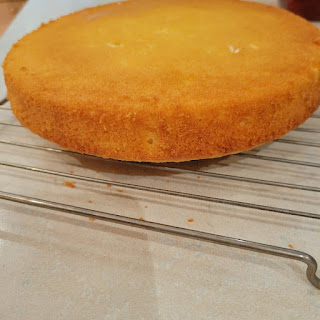 I think I might stick with my one-bowl chocolate cake in the future. Just dump everything in and mix it up!
But it turned out OK. It was a bit dry and heavy -- not enough air, and those double yokes didn't help. However, once you add a bit of whipped cream and some raspberries, who will know? It was tasty, and that's all that counts. 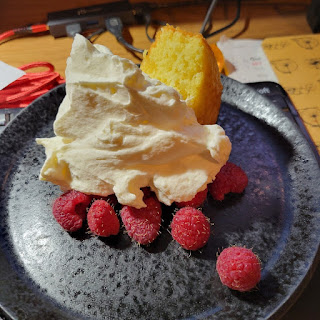 I'm close to Mount Adams in Washington state on my virtual walk on the Pacific Crest Trail. Did you know there was a shelter on the top? Well, there is, and it doesn't look in too good of shape. And if you look close, you can see Mount St. Helen's in the distance. How cool is that?

Well, I must get myself organized and out of the house. Why do I always feel like I need ONE extra day! I've got to start working on getting ahead by one day!