Hanging by a thread

For once, that (title of the blog) does NOT refer to me and some crazy deadline. I'm so relaxed that - well, it's gazebo time!

Even in the heat, I was in the gazebo (with a sweatshirt on) and happy as a clam. It was glorious with the trees and the breeze until the sun came around the roofline and shone into the gazebo.

I was supposed to be reading, but I had a nap instead. The scent of the lilacs and the tingle of the windchimes put me to sleep.

Of course, the girls were there to entertain, but I think it was too hot for Murphy to even think about playing ball.

Let's just say that the gazebo is my happy place, and I'm so lucky that it was here when we bought the house because I don't know if I would have thought about getting one. It needs to be repainted this year, so I must arrange that. I'm certainly not doing it --- I have too much other stuff to do.

Great fun with the Monday sewing ladies, and what I love is that it was very relaxing, and I could work on whatever I wanted. So I worked on this! My chunk of the month, and I got one more section done. Yeah!!!

That's a total of 5 sections, only four more to go. This is on my UFO list for 2019 -- a little bit behind, and I'd really like to get it done since I'm this close.

Where did the pattern come from? It's mine! I ran this as a block of the month with two of my local guilds back in 2013/2014. OH -- and if you want to see the show and tell from one of the guilds, check out this post. MANY people finished the quilt. Looking at what people did with their background choices -- I want to make the quilt again! The idea is that the background is supposed to be shaded from light in the top left corner to dark in the bottom right. However, that's a challenge with bright orange, but I believe it goes a bit darker in the bottom corner.

Should you want a copy of it, let me know, and we can arrange something. It is NOT a very pretty pattern, and there are two tutorials on my blog for tips. I would write it differently if I had to rewrite the pattern. It's a bit of a challenge to twirl the seams in this one, and I was learning, so it's not too pretty. Now I know better!

I'm not sure I'll have time to work on it today, but I hope to lay out the next section.

But this is what I had to deal with. That little sliver of white is where the fabric didn't get caught in the seam allowance in the middle. As the long arm went over it -- it pulled, and well, we had a bit of an issue.

And that goodness, I know how to use that software for the long arm. I'm not sure how I even learned all this. But let's say that those blue dots (reference points) are CRITICAL to the success of any quilt.
I had ripped out the part that got messed up without removing the quilt from the long arm. Then it got rolled back up and ready to continue with the quilting. I had saved the pattern and hit the REPAIR button, and I chose the spot on the quilt corresponding to the location on the software.
It was slightly out (the needle should be falling on the stitching line) that got moved, and away I went.
The quilt was almost finished, so it didn't take long once the repair was done. And here it is -- the customer quilt, which I'll trim later today.

This doesn't happen often, and while the open seam caused the issue, I should have checked the pattern placement more closely. So the ripping out required was MY fault. Grr -- lesson learned!!!!

Look at this tree which got damaged in the storm. It's literally hanging by a thread. You would think that the leaves would be wilted by now, but enough nutrients/moisture are going through that crazy join to keep the tree going? How is that possible?

We'll be in a total mess soon, and it will be like that for a couple of months. The front of the house is being totally dismantled. Ooops -- the front yard, not the house. I offered my neighbor that she could take any plants or mulch. Good grief -- she's taking my dirt!! Well, it's not a large flower bed, and it's all going, so I guess she might as well have it before it ends up in a dumpster! I can hardly wait -- the ENTIRE front yard will be gone and replaced with new. I'll take some before and then after and lots of during pictures for your (and mine) entertainment.
I don't know what was happening with Murphy, but she stood like this for a long time yesterday. She would lay in the sun, then come downstairs to cool off. Then back out to the deck. Silly girl.
I walked to my local grocery store yesterday, which has gone through a total renovation, all while the store was open. Ceiling painted, new coolers, signs, cash registers, all the food moved into new places, the Star Bucks opened, and there are the cup holders! They are red -- not pink. I haven't used a grocery cart in years -- I only buy a few things at a time, so I use the baskets.
Speaking of buying, there seems to be a shortage of freezer paper. Not sure why that is, but I don't think I need to worry. I have a lifetime supply of the darn stuff.
We did hear yesterday that you could buy it at Treasure Hunt (thanks, Mary) -- a store that I've never heard of. Although other stores have carried it -- there seems to be a shortage, so it's possible that while Treasure Hunt sold it, they may not have any in stock. And someone sent me this link to a store called Cabela's (also Bass Pro). I'd be careful in case that's the brown butcher paper. Just checked -- yes, that's the brown stuff, so it's harder to trace through. Thanks, Barb!
And you can also buy freezer paper in sheets. Here's a link to Thimbles and Things, where they are waiting on the boxes, so all they have is sheets at the moment.
Anyway, I'm not going to ever have to worry, and NO -- I won't sell any boxes. Just in case you were going to ask.
I spent some time last night with my new MacBook. I'm starting at the front of that book and working through it. To be honest, I have ZERO ideas why everyone is so ga-ga about the MacBook. There is absolutely NOTHING in there that my laptop can't do. The buttons are the same (they might be called something different), file folders, all that stuff -- It's the SAME - just a proprietary laptop! I guess I have to dig deeper to see the big hoopla. Better security? I couldn't care less about that. Less crashes? I've had ZERO issues with any Windows products other than the computer wearing out!
I have a list of things to get done today, and one of them is to trim these hourglass blocks, which have been sitting on the cutting table for a while. I cut them and pressed them this morning, so all is ready to go later today.
It's all about slow and steady!
OK -- so my FitBit had another moment of insanity yesterday. Look at the number of steps I supposedly walked. That's about 70,000 MORE than I actually walked, but look at the KM -- only 12, which is typical for me, equating to about 16,000 steps. In my spin class, the Fitbit counted every revolution of the pedals as a step, and that's NEVER happened before. 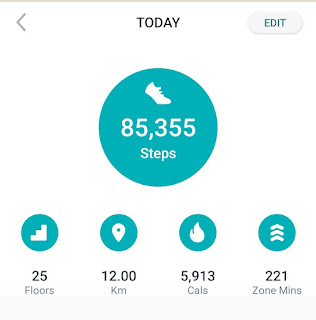 I'll be keeping an eye on it and see what happens in the future. Since I only clock KM, I don't really care about the steps. But very weird!!

I have masses of computer work to do today- well, it won't all get done today, but I'm working on it.