The weather is perfect these days, although I wish it would rain every night. Things are so dry, but it's beautiful to have the windows open all day and night. The humidity levels are extremely low or non-existent.

I started the Virtual Retreat two hours later, although technically, anyone could have joined, and I was off for a bike ride. I wasn't sure what route I was going to take, and I usually make a big circuit, so at any point, I could have turned right and made the trip as short or as long as I wanted, but I had a distance in mind. It seemed like a calm day when I walked the girls, but I discovered a nice headwind when I got on my bike. Yeah!

However, my legs are much stronger than ever, and that headwind was NOTHING. There are a few hills along that route with grades of 11%, which is nasty, and I managed to get up those with no problem, although I was breathing a tad heavy when I reached the top!

No issues, traffic was kind, and it was a glorious 40 KM in under 2 hours. The only thing that would have made that ride perfect was to have chocolate milk at home! There's nothing like a glass of chocolate milk to refresh you. I remedied that situation later in the afternoon when I walked to the grocery store.

It takes me ten minutes to walk to the store, about four minutes (depending on what I'm buying) to buy and check out, and ten minutes to walk back home! I have to say that I love the new self-checkouts, but they do need to make a couple of modifications. If you are buying a lot of the same thing (my snack bars are on sale this week, so I'm sticking up) and you can't enter the number of similar items, only the self-checkout supervisor can. I'll ask next time before I attempt to scan six items of the same thing. And you can't NOT get a receipt, but that's coming where you can request no receipt!

We had loads of fun at the virtual retreat. It wasn't as busy as on previous occasions, but many people were traveling, had family visiting, or were doing whatever. I will confess that I didn't get as much done as I wanted, but I never do! I MUST learn to stop talking so much!

I did get the blocks fixed and the top completed for my Wonderful Woodland, and I'll post those pictures this week.

Then I scrambled to find a backing for it. I couldn't find something suitable for the first time in a long time. WHAT??? With all those bolts of fabric? Yep--- couldn't find anything. Well, the other thing was the size of the quilt. It's 47" by 63", so to do my easy way of backing - cutting two pieces either vertically or horizontally, would have been a big "waste" of fabric.

So I started to look at my flannels and found this.

It was a fair amount of fabric, but it was in strips and looked like the cut-off edges from the backing of another quilt. I gave the pieces a good look and then decided that YES, there is enough fabric there to make the back, but it'll have a few seams in it.

So I measured, sliced, and diced, with three seams left to put it together. I was hoping to get that done last night, but that didn't happen. But that's on the agenda for this morning with Monday sewing.

I have the backing for one more quilt I want to get done today. I hope so. And then two other finished quilt tops need backing, so I might just focus on that. Not that I need to add to the "to be quilted" pile, but I need to get those finished quilted tops out of my sewing area!

Nothing is happening at my house on Tuesday or Wednesday, so I hope to accomplish much.

I went to bed much later than planned, so I'm behind this morning. But I'll leave you with these pictures to contemplate. When I walked past that rental house two doors down, this is what they left.

And from the other side. It's a HUGE mess, and I can't believe that people feel it's OK to just leave this behind. The recycling and garbage bins were also packed to capacity, with the lids popping open. Why couldn't they call the junk people to collect it? 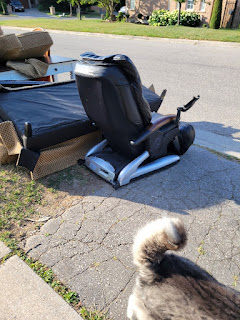 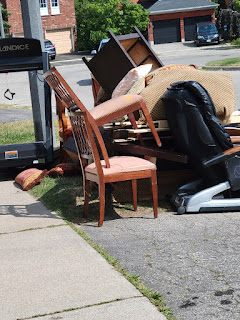 On my way to the grocery store, a vehicle parked across the street that I didn't recognize, and the door to the house was open. The owner of the house? On the way back, I saw someone coming out of the house, and I swear there was more stuff on the pile. Actually, there is more stuff if you compare the last two pictures.
I bet they were having a heart attack if it was the owner. Apparently, the backyard is about 3 feet high with weeds, which I heard from the next-door neighbor who moved out the previous summer. Such a shame as the people who originally owned the house kept it immaculate.
I remember renting a house in Montreal before I could sell it, and when the renters moved out, it was a pigsty, but at least they removed all their belongings!
And this is the house at the end of the street. Yes, those branches got trimmed, but they are now lying in the drive, and who knows when and how they'll be removed? But the trimming still doesn't clear the overgrowth of that tree, just enough so she can get out of the garage from the left side.

I shouldn't complain because it could be worse!

Well, I'm off to make quilt backs today! I did zero decluttering, and zero quilts were done on the long arm, but I hope to do some today. And I may get out for another bike ride this afternoon since it's a holiday and there was no spin class this morning. I'm a "few" kilometers behind on my stretch goal of cardio KM this year, and the only way to make them up is to get out on the bike! I should be out every day for 40 KM, and I could be caught up in a couple of weeks!