Lots of great tips on the rash -- thanks to everyone for that, and YES -- I agree about the blow dryer, although I didn't resort to that. But the cool air blowing on my arm in spin class was very soothing. I'm happy to report that while it's still itchy and I'm keeping my hands off of it, it's calmed down. That Tea Tree Oil did the trick! Now to prevent anything from touching it, which reminds me it's there, and I want to scratch it!

This weather is crazy! One day we're in an oven with the temperature cranked up, and the next day, out of the oven and into the fridge! I know that many of you won't agree with me on this one, but the LESS time you spend in air conditioning, the more you acclimatize to the heat, and the less it bothers you! I know -- but it's true. We don't turn our AC on unless we've had several intense days of humidity. I am running the dehumidifier in the basement.

Yesterday when I walked to the grocery store, there was a nice breeze, and I didn't feel hot at all, even though, according to the weather channel, the humidex was over 40. However, after spending maybe 10 minutes in the grocery store AC, I started sweating on the way home! Granted, I was carrying two bags of groceries, but still!

Anyway, it's time to catch up on a ton of stuff, and I was a busy beaver yesterday in Studio B.

Here's the cat wrangling story from the retreat. I'm not such a big cat lover, and I suspect that I may still have allergies to them to a certain degree. However, I'm an animal lover, and that's good enough for me!

We noticed two cats hanging around at the retreat. We had been told they were feral, and we were fine with that. Then we noticed that one of the cats wanted to be friendly but was very cautious. After several of us went outside, sat in the chairs, and talked to the cat, it approached us to the point where we could touch it. Not close enough for us to grab it, but to touch it!

The other cat was nowhere to be seen. Then as we spent more time, we noticed that its jaw appeared to be swollen, and it looked a bit on the skinny side. So Katheleen got some food, and the cat devoured it. We figured the cat needed medical attention, and so started the great cat wrangling caper.

The owners were kind enough to bring over a small crate, and we tried to tempt the cat into the crate, but while she wanted the cat food, she did NOT want to have anything to do with the crate.

The next morning, the owners had brought over another larger crate, so the plan was that Katheleen and I would be responsible for getting the cat into the crate.

I was off for a bike ride, and the cat was sitting quietly in the cage when I arrived back at the house. Way to go, cat wrangler Katheleen!

I was afraid that the cat would be freaking out in the cage, but nope -- she struggled for a few seconds, and then she was quiet. The other cat immediately came by and wanted to be part of the activity but didn't want to get in that cage.

That didn't prevent him from trying to steal the food in the cage!
They look like they are from the same litter. As for names? Well, the owners had called them Mr. and Mrs. Pickles, although we have no idea if they really are Mr. and Mrs. However, we feel the one in the cage is a female, and the other is a male. We checked, and girl ginger cats are rare, but about 20% of them are female, so it's a possibility.
We have no update on the cats yet, and we may not. They aren't our cats; hopefully, the owners will get them the attention they need.
Enough about the cats, and let's look at dogs -- my favorite animal! This is my daughter's dog, who is like a baby to her. He's so small even though he's a grown-up! But I swear, he has an EVIL eye and always gives it when he's had enough of the picture-taking process!
Here's another photo; if that isn't the evil eye, I don't know what is!!!
But look at him, all cozied up in bed! Love and miss you, Mr. Bear!!!!
He's all wet as I think he went swimming in the fountain! Oh, Mr. Bear -- was that allowed?

I haven't touched anything in Studio U for a couple of days, but here are some things I found when I was there. Can you tell me why I would have had MULTIPLE copies of these boats? I'm not a boat person, and nothing comes to mind when I look at them.

I had a thing for millennium fabric, and yes -- I found an ad for a fabric with the year 2000 on it. We won't go into detail about how much of this fabric I accumulated and have done a thing with it. I should have learned from that experience about buying excess fabrics.
I loved Calvin and Hobbes when it was out, and this is one of my favorite comics. Hopefully, you can open this on a screen that allows you to expand it to read. 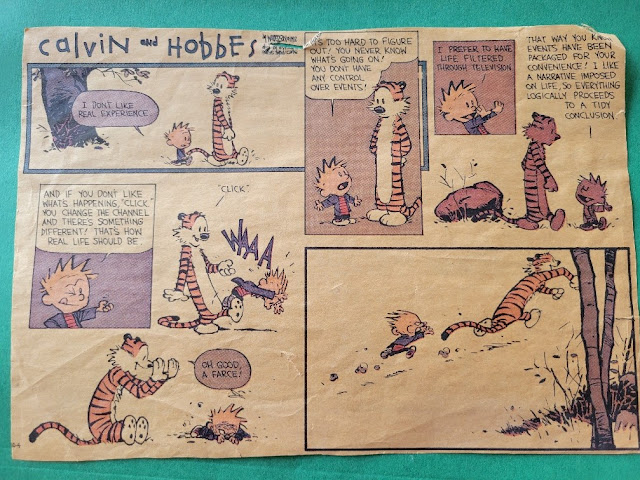 Calvin: I don't like real experiences
Calvin: It's too hard to figure out! You never know what's going on! You don't have any control over events!
Calvin: I prefer to have life filtered through television
Calvin: That way, you know events have been packaged for your convenience! I like a narrative imposed on life, so everything logically proceeds to a tidy conclusion.
Calvin: And if you don't like what's happening, "CLICK," You change the channel, and there's something different! That's how real life should be!
Hobbes: CLICK
Hobbes: Oh, good a farce!
You have to be flexible!!!! That's the best way to enjoy life; it's how we learn and grow!
This is something else I found -- remember back when there were contests on cereal boxes? Or you could collect a certain number of box tops and then send them away for something? Well, look at the return address on this. Kellogg's, Paris, Ontario. No street address, no postal code. I believe the Kellogg plant has long since closed down. The production plant was in London, Ontario (closed in 2014), and perhaps there was an administrative office in Paris. I can't find the information online at the moment.
And look at how much postage was required to send the package to me - Seven cents!!!
And look at the address that it was sent to. Again, NO street address, just a remote village in the middle of nowhere. No postal code. It's hilarious!!! We now have complete and sometimes complex addresses with postal codes and tracking. Back then -- NOTHING. No wonder people resist change, as it makes everything much more complicated!
And I found this picture of M, myself, and my Dad. That would have been taken in 2002??? Somewhere in that range. Such a cute kid, and I notice that I'm wearing a hairband even back then. I CAN NOT stand to have my hair on my face. My skin is so sensitive; my own hair drives me crazy!
And to end today, here's a picture of Miss Murphy with her stress toy. She tries to sneak other bears out of the house, but we only allow one stress bear outside at a time. Otherwise, the yard would be littered with her bears!

I'll have to share my productive day with you tomorrow, and I hope to have the same kind of productive day today, although what I'll be working on will be totally different.
Have a super day!!!
Ciao!!