It was bound to happen. I've been so lucky with all the bushwhacking I've been doing. Zero issues with plants that didn't agree with me.

However, yesterday, I decided to explore a trail that wasn't good, and now I'm in trouble. Let's start at the beginning.

I thought I'd go geocaching one more time, but I got about 3 KM from the house when I realized I did NOT have a pen. OK -- so maybe I'll go exploring and see if there's anything easy to get, and I'll go today to sign the log. The first one I stopped at involved bushwhacking, so I didn't pursue that one.

The second involved going down this trail. This area doesn't believe in bike trails; it's geared towards ATVs, snowmobiles, or people more adventuresome than me.

Although I will say that this trail started out a bit more civilized than the one I did the day before.

That picture above is one of the better parts of it. I stopped for this picture and was SWARMED by mosquitos, so I got out of there as quickly as possible. However, I was brushing against the trees, and I don't know if it was just the irritation or if I actually touched something I shouldn't have, but my arm is so darn itchy that it's driving me crazy!

You can't really tell in the photo how irritated it is, and to be honest, it doesn't look that bad, but it's darn itchy. Karen had some ointment which I used last night and then again before bed, and I wrapped my arm in a towel to not get ointment all over the sheets.

Let's just say that it's a tad annoying.

Yesterday morning, we watched the fog roll in and then row back out again, and it pretty much obliterated our view of the corn fields. 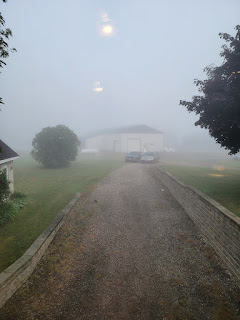 Anyway, my bike ride ended up being a joy ride on the roads (34.6 KM), and it was glorious fun. I went in the morning before it got super hot! Gosh -- I love to ride, but I must get out more at home.
Then it was back to work. My project is Green Tea and Sweet Beans - a class I'm teaching, but I'm far behind in the homework.
These curved piecing blocks were cut but needed to be pieced. They are now done. Yeah!!!!
I'm still looking for enders and leaders and not having much success. This was the second attempt -- still too small for my liking.
The group thinks I have too many rules, but I DO NOT. My only rule is about the extra goodies, and good thing we didn't have any extra goodies because we've had a decadent dessert at every meal, and there's been no need to have those extra goodies! I've eaten well but NOT overate.
But we have a rule that we've primarily respected, and it's NOT mine. At the table, we try to sit in a different spot at each meal, so we chat with someone else, although most conversations have included the entire table.
We had left our napkins on the table in our new spot, and then someone went along and tidied up, and we had to pick new spots!
What can I say about Spring House Retreat --- this is the fifth retreat house I've rented. Did you know that my first retreat was back in 2007 (I think that's the year)? And while I've lamented whenever one of them closed (only two have closed on us) and we're reluctant to move to a new place, you would LOVE this retreat house. It's huge, sleeps twelve, and can comfortably hold twelve people to sew.
It's well equipped, and the owners are excellent and very helpful, including coming to my rescue when I needed newspaper the other night to dry out my cycling shoes. There is ample space to find some private space if you need it. There's a seating area outside under a large tree, the veranda, and the back deck. The bedrooms are large, the showers are amazing, and the kitchen is to die for! And plenty of parking, with many quilt shops within a reasonable driving distance.
Would we recommend the place? Part of me doesn't want to because if I want to book, there'll be no room. But I LOVE the place and HIGHLY recommend coming here for a retreat. As a matter of fact, I've extended my two bookings for 2023 to ONE WEEK. Can you believe that?
Here's one more Wanderer's Wife that got competed while here. This is Maryke's version, and this photo does NOT do justice to the quilt, and it's beautiful!
I put all my Green Tea blocks on the wall to admire them.

They look pretty good, and I'm happy with the overall results. When I get home, I'll put them on my design wall. I hope to get all the pieced blocks done today. We don't have to check out until 3 PM, and I hope to be out of here by 2:59 PM. That never happens either, but it's only a one-hour drive home!

I have a lot of applique blocks to do for the Green Tea quilt, so I hope to make that a priority this week, but I have other things to get done before I'm off on my big adventure. I'll explain that one later this week.

Anyway -- time to get back to work, and I want to sneak in an hour bike ride today, so that'll happen this morning before it gets hot.