I was going to be mean and post about something else this morning, but well - I couldn't hold back!  I knew you would all be mad if I didn't share what we did yesterday on our road trip.

And some of you are very smart!  A couple of weeks ago, I posted a picture on Facebook of a Row by Row quilt. I didn't say much about it, except that I thought it was a cool idea.  Yesterday, when I posted on Facebook that we were at the border, TWO people (Pat and Mary) guessed what I was doing and one person even remembered the picture that I had posted earlier!  Mary - you're very smart!

I shared that picture with Ronda and asked if she was interested?  Game on! She shared the information with Laura who immediately mapped everything out and plotted a route. A few e-mails and texts and a date was set and we were off!

Just wait - there are pictures!

The first store opened at 10 AM, but we had to contend with crossing the border into the US so Ronda (the driver) and Laura (the navigator) arrived at my house at 6 AM.  They were about 2 minutes late, but that's OK.  We stopped at the Tim's for breakfast and holy cow, that set the tone of our cashing out experience for the day!  I think the person must have been new. After repeating our order several times, they finally got it right and we were off.

We arrived at the border, passports in hand.  Oh ladies - see that Nexus line over there?  Well, there is NO Nexus line. I mean there is a Nexus LANE, but no LINE in that lane!  Alas, I was the only one with NEXUS so we waited.  It took about 35 minutes to get through. No issues although I did think that Ronda was a tad too chatty with the border crossing agent!  Oh my - how picky we are! We had a good laugh about it and recounted all our border crossing stories while we waited.

Then we were across and in the state of New York. We arrived at our first shop around 9:30.  We had discussed waiting at a coffee shop or something, but this shop was in the country!  We popped in a few minutes before 10 and it was a glorious shop!!  It was way bigger than it looked on the outside and they had a little bit of everything in that shop.  This was definitely a must return to shop despite the fact that it was one of the farthest away.


They had a quilt block on their garage which is below.


We had 20 minutes to peruse the shop and check out.  NOT ENOUGH TIME, but alas, if we were going to meet our goal, we needed to keep on schedule. And Laura was an excellent time keeper.   I can imagine if she volunteers for field trips with her kids.  Nothing would go amiss!

Back in the car and off to the second quilt shop which was about a half hour from the first.  It was located in an old community hall and as we entered, there was the stage at the back which had been turned into a sewing area.  Very neat shop.

This shop required a slight off-rading experience as we pulled into the wrong parking lot. No problem as Ronda proceeded to drive over the grass between the two parking lots. I saw NOTHING!

And so it proceeded throughout the day. Laura had done an excellent job of getting us to all the shops as a couple of them were only open until 3 PM.  We got lucky on one as it was scheduled to be open until 4 PM. But it closed at 3 PM.  Guess what time we got there?   About 2:45 PM.  We had no idea that the shop was closing.  Ronda and Laura had already returned to the car and as I was checking out, the staff was going around the store shutting lights off.  Phew - that was close!!!

Oh I must tell you about the van.  Ronda is driving and Laura is navigating with the GPS (all the shops were programmed in!)  I was the back seat driver, although I didn't really have much to say as all was good up front. I was in the back eating snacks!  I sat on the passenger side of the van and unfortunately this door didn't open from the inside. I wonder if that had been rigged?  So Laura had to be my door person as I didn't want to move to the other side. No reason - just lazy!

We arrived at one shop and it looked closed so Laura hopped out to see if the door was open and then she walked right in!  Wait!  You forgot me!  Wait!!!   Thankfully Ronda was still in the car and was able to rescue me. We had a good laugh about that and I wonder if Laura has ever left her children in the car?

We had a total of 8 stores to hit and I'm happy to say that we hit them all with about 15 minutes to spare at the end. Well by the time we left that store, it was 5 PM.  A super successful and fun day!

Oh - you want to see what we were doing?   Well here are some pictures.

This was the card that I had seen posted on the internet.

Eight shops in Western New York got together and with the help of designer Susan Rooney, created the most amazing row by row quilt ever.  The eight rows (and a small finishing kit) make up one coordinated quilt measuirng 54" square.

Here are the eight participating shops.


How could you resist this? And it was so close to us that we were able to do all 8 shops in one day.  We didn't say anything to anyone because we didn't want to walk in the shop and buy kits for others. I really feel that Row by Row is something that needs to be experienced in person and the effort that these stores made - well you must go to them all yourself - it's so worth it.

We began to realize that EACH of the rows had a specific meaning to each of the shops. We got to hear the story and chat to the makers of the quilts, the owners of the shops or the staff and they were all very proud (and so they should be) of their Row by Row. We really had a positive experience at all of the shops.

The big question on the way down was whether to buy the kit or just get the pattern.  After all, we all do have loads of fabric. But once I saw the actual quilt and fabrics, I said - GIVE ME THE KIT because it was so well done.  So yep - bought all eight kits and the finishing kit. The patterns are EXTEMELY well designed and in full color. These ladies know how to do it right!

We had a little happy dance at the last store and here's a picture of the three of us with the quilt hanging in Auntie's Attic Quilt Shop. 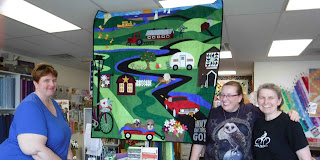 This quilt was the version that was hanging in the first shop (Mount Pleasant Quilting Company).   Most shops had their version hanging up.

We had to laugh at some of the shops because this one had a description - the little red barn in the back.  OK - so you're expecting a farm?  Nope, this one was in the suburbs.  A cute little shop!

Yesterday is what Row by Row is all about. Good times, visiting shops you've never been to before, spending money (we won't go there for the moment), there was ZERO time for eating (I was forced to eat chips and candy as I was locked in the back). We did manage a potty break or two that was smuggled in at the various shops along the way - but god forbid that you went over the 20 minute time!   It was so much fun - I'd love to do it again, but I can't for a variety of reasons. OK - two reasons - time and money!

Here are a few sights that we saw along the way and then I'll tell you what happened on the way home.

I think there are more Tim Horton's in Western New York than there are in Ontario!  At one point, there must have been a Tim's at least every two miles.  I managed to snap half of a Tim's as Ronda went speeding by! They are called Cafe and Bake Shop in the US. In Canada, they are just Tim's.

There were some massive steep hills as we criss crossed the country side.


Once we finished with the last quilt shop, it was time for a proper meal!  We popped into Applebee's which was right across the street.  It was here that we had some bad news to share. We tallied up our receipts. OH!   OH! - I'm OK with that.  Dinner was great and there were two more stops we wanted to make before we headed home.

Joanne's  - which wasn't far away and we managed to snag a few things there. Apparennlty there was a 20% coupon that you could download on your phone. Oh - so those bicycle bookends that are $50 marked down to $25 will cost even less?  YES. OK - so I picked up the book ends.  Add another $50 to the receipt total by the time I got out of there.

I had wanted to hit Barnes and Noble, but the one that was in Niagara Falls is now closed. The closest was Buffalo or Amherst and while we had been in both places earlier, there hadn't been time to hit the Barnes and Noble. No worries - let's move on.

It's time to head home and get through the border.  We had quite the discussion on what to say as we got closer.  I'm telling Ronda that she was too chatty on the way over and she needs to be very short in her answers.   We rehearsed in the car! And this is how it went.............

Between the three of us, well, let's just say that we helped the economy of the quilt industry in New York - a LOT.

And really, those border crossing guys are looking for smugglers. We weren't smuggling - we did declare everything we bought. We're three very innocent looking women - we had nothing to hide.  So we didn't have to pay tax at the border.   THANK YOU border crossing agent. That made me feel a smidgen better about the money I spent!


This is for Ronda and Laura -  here is the scary blue bridge that we drove over when I was at Paducah!!!  Open grid on the entire length of the TEN SPAN totally metal, narrow bridge. 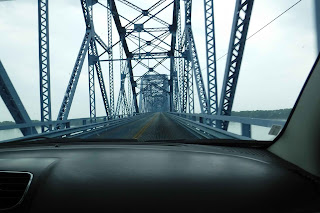 On that note, I've a ton of work to be done today.  The dogs have been to the park and they're exhausted.

And if you get a chance to get out to do some Row by Rowing, take advantage of it.  It's so much fun. Yes - I wish it had of been in Canada to support my local quilt shops (but I supported them last weekend when I was at the retreat!)

Anyway - the most important thing - get out and have fun.  Now the next key thing is to actually make that quilt.  It's so cute and now that we know the stories (well most of them), I really want to make it.  A good project for the retreat!

Email ThisBlogThis!Share to TwitterShare to FacebookShare to Pinterest
Labels: bridge, Row by Row