It was one of those days. I have an issue with my phone. I will be chatting away, and then suddenly, the person on the other end can't hear me. If I go outside, then they can hear me. However, on one call yesterday, even that didn't work. Last week, I was in the car and chatted for an hour, and no issues. So why is being in the house causing the problem?

Is anyone else having this difficulty? I had been to the Bell store in the mall, where the people are really salespeople, and they had directed me to the service department or Samsung.

I was so ticked off yesterday that I got in the car and drove to the Samsung service center. Thankfully I arrived when I did, as the number of people who came in behind was incredible!

I talked to a woman in her 30's? And well, I didn't like her. It's not so much that I didn't like her; I did NOT like how she spoke. She started blabbing that this was a provider issue and talking about something so fast that I could not catch what she was saying. And she kept talking, so I had to rudely interrupt her to ask what she was saying. Voice over LTE. OK -- now let's continue the conversation. I HATE when people are not actually talking to the customer but giving a prepped answer.

She offered to run a diagnostic on the phone to see if it was the phone. She returned and told me that this was a provider issue. Look at the data -- dropped calls (a tiny amount of dropped calls) in the time frame she tested. Then she proceeded to say that I had a tower issue. The calls were not going through properly because of the towers, which is NOT Samsung's problem.

So if this is a tower issue, why can I keep hearing the other person crystal clear, yet they can't hear me? That is no more a tower issue than -- well, I just hated how she brushed the entire thing off onto Bell. I'm not saying that Bell is a saint, but it's the way she said it. And she kept calling me MAAM. Good lord --- I'm not a MAAM.

I'm going to go to the repair service at Bell and ask them about this Voice over LTE. It's something to do with 5G --- according to the Samsung lady, there is no real 5G yet, they are trying to get it up and running, but it's not working correctly. Now that could be true. So I'm going to get the round around on this issue -- I just know it. And this is a phone still under warranty! Today, I'll open a ticket with the Bell repair center, and let's see what happens.

As if that weren't enough woes - I had a large customer quilt to quilt. Please do NOT get me wrong. I do not put this information on the blog to shame any quilter, and I put it here so you don't make the same mistake. The quilt worked out fine, but there are better ways of doing things, and a couple of them arose yesterday. PLUS, I made a mistake which you'll hear about in a second.

The quilt is huge, which isn't a problem -- it got loaded, and the customer sent batting. It wasn't until I was halfway through that I realized this was happening with the batting. One side was smooth, and the other side was quite ruffled. This is a result of joining the batting. One must take great care when joining the batting that one side does NOT get stretched or gathered compared to the other side. It's really about the two sections not feeding evenly through the machine.

Is it a problem? Technically no, but in reality, this happens when it's on the machine. And I have to try and smooth that out and not get wrinkles or tucks in the batting. I did my best.
As I got closer to the end, I knew I might be in trouble as one side was significantly shorter than the other. I would guesstimate that the short part was at least 6 inches shorter than the long side, which is a LOT to hide in a quilt. I did have to make a small join at the end as I had run out of batting.
So if you need to join your batting, I have zero issues with that. But try to feed both sides evenly through the sewing machine. Make sure that both pieces are the same length and use clips to hold them in place, so they don't shift. It'll make the quilting process easier, and there will be NO ridges of excess batting in your quilt. You wouldn't know that until you run your hand over it. I think I got rid of most of those, but there are likely one or two small ridges.
This is a huge quilt, and its center was pieced impeccably. The seams were straight, and the top was flat. It was great.
However, there is a VERY wide border which I suspect was stitched on without measuring as there were lots of rippling along all four sides. As a matter of fact, the top and bottom were 2 whole inches wider than the center. This is usually the result of NOT measuring the borders BEFORE you cut them and ease them onto the quilt. 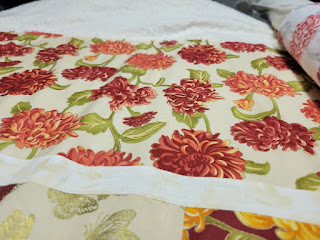 While that fullness can be worked into the quilt, there is a chance that ripples or small tucks will occur. There are no tucks (to my knowledge) but lots of rippling between the quilting lines. This will not be noticeable when the quilt is washed, but it makes it more challenging to quilt.
The back of the quilt was heavily pieced, and it seems to be OK. I left one inch at the top of the backing, and you can see there wasn't much left at the end. Thank goodness I load the quilts with pins as there wasn't much room to use any other method. I still swear by my pins!
Again --- this is strictly to inform you of what you shouldn't do when prepping your quilt for the long arm quilter.
Be careful when joining your batting and attaching borders to a quilt! This could have turned out bad, but I managed to make it work.
Well, this quilt wasn't done with me yet. As I approached the LAST row, my computer gave me an error message which I dread getting because I know it's going to shut down, and that's precisely what it did. I MUST download the new version of the software, and hopefully, that won't happen.
Anyway, I shut everything down and restarted. When I redid the pattern, I miscalculated the number of repetitions. I have no idea why I didn't count the number manually just to check. So I started the final row, and BAM --- the pattern was too big. GRR!! Thankfully I was standing right there, so I knew there was a problem right away.
It meant a bit of ripping was in order, but I was too tired physically and mentally with this quilt that I shut everything down. It's now ready to be finished the first thing this morning because I have one more that needs to be done today.
It's all fun and games with the long arm! I need to get my small backlog out of the way before next weekend, and I should be able to almost clear it. Then I'll have some time to work on my own stuff? NO -- I'll have time to quilt some of the quilts Diane has made. Baby steps!!!
I also managed to finish some machine embroidery that was partially finished and was driving me nuts. I didn't take a picture, but I'll share that tomorrow. Then I started on another project for machine embroidery, and it looks AMAZING. I brought a design into the software, modified it, and stitched it out. I LOVE it. I can't wait to share. And that gave me a ton of other ideas. And thanks to Margaret, who, via text, gave me another idea. So many ideas, so little time!!!!
We have all been madly working on our Jen Kingwell quilts. Well, I had someone who mentioned they wanted to make this quilt, also by Jen Kingwell.
Each of the blocks has a circle in it. Someone actually decided to go forth on the quilt and look what they bought.
YES -- it's a kit for the quilt.
And not only did they buy the fabric, but the templates as well. Yikes --- that's a serious kit. Look at all those templates.
And then there's the kit for Boho Heart.
And one for Long Time Gone!

Let's just say that this person is going to be super busy!!!! And the person who originally wanted to make The Circle Game? She wasn't so keen on it anymore when I showed her the many small pieces in each block!
Notice that no names have been mentioned to protect the innocent! They know who they are, and thanks for sharing!!
I'm still walking and averaging about 11 KM a day. Here's the status of my Pacific Crest Trail virtual walk. It is 4,000 KM, and I started on August 25 last year. I now have less than 500 KM to the finish line, and I still have 85 days. I gave myself one year to complete it. I should finish in about 45 days at this rate, but we'll see how it goes. I need to shift gears and maintain my morning walk with the girls, but I need to get out on my bike. 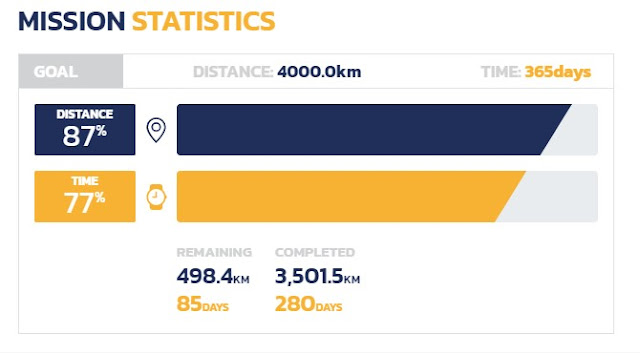 I have another challenge that I set for myself -- 8,000 cardio miles for the year, including biking and walking. I'm about 500 KM behind on that one, so I could take my bike and make up a lot of that quickly instead of the afternoon walk.

And what's with the weather? We were sweltering in humid, hot weather two days ago, and I think I have to put long pants on this morning to walk the dogs. It's totally crazy!!!

More paperwork is done, and I have more to face today, but those two quilts are now a priority, and trimming them will be the focus.

But all is good, and I'm enjoying "the break" where I'm not running like a mad person to fit stuff between classes, etc. It's kind of nice to have this "free time."

For those that have inquired about the Chunk of the MOnth (the blue and orange) quilt, I have an idea so hang onto that thought!