OH, SHOOT -- it was only when I got home from the gym that I realized the blog post had saved a VERY ROUGH draft, not the final one, and I had to rewrite part of it. OOOPS.

I seem to be getting my main work done starting at 4 PM, which is wild for someone who gets up early. Why is that? I started quilting the customer quilt at 4, and I tackled my box of crap after dinner, and I must change that because I fell into bed exhausted.

However, I'm thrilled to report that things are looking up. Tackling a little bit every day has made a difference. I can see the difference, and I refuse to put anything on that table until it's clear. Then I'll take stuff that is still sitting on the floor and refill the table, and I hope to keep doing that until the mess is gone. At least the visible clutter. Now it's not as bad as you think. Yes -- there are boxes on the floor and that plastic cabinet with a missing wheel, but it will be done! I figure I have two more tables worth of stuff before I could call that part done.

So yes -- the office was a mess, but it wasn't a hoarder's mess. It is messy mainly because this stuff doesn't have a home. I'll have more pictures to share with you later this week, but I'm determined to clear that table before I leave on Monday. And I know I'll refill it the moment it's clear. Why? Because I'd rather have a clear floor than a clear table! And it makes it much easier to clean. YES -- this will get done!

Even if I stopped now, I feel much better, and I've learned how to get rid of the stuff. I don't even thank it as per Marie Kondo -- nope -- it just goes! And once the visual clutter is gone, it'll be time to pull out the stuff from the cupboards. Thankfully there are only that many in here.

This is what's happening at our house. Monday morning, bright and early, a bin arrived.

When we bought the house, we were thrilled with the beautiful interlock. As the years have passed, we have grown to HATE the stuff. The weeds grow between the stones unless you wash the driveway and seal it every year, and we hate doing that.

And we had a blocked drainpipe near the front step, which needed to be fixed.

Plus, our front steps were very uneven in height and were a pain for anyone with knee issues to get up, and the railing wasn't the best.

And we had grown tired of the landscaping. So EVERYTHING GOES. I offered my neighbor that she could have anything she wanted.

At first, she took a few shovels of dirt. I had meant the plants, but the soil will likely go. Then she emptied the planter in the front of the house. It's not like it was a large planter, so I'm OK with that. And she is allowing me to park my car in her driveway so she can take all the dirt she wants.

Then she asked if she could have the big capstones from the small wall lining the driveway. Sure -- they are just going to go in the bin. So between her and several of her friends, they have been harvesting my driveway of stone.

They took the edge stones from the sidewalk outside the gate.

And I let them in to get the stones lining the walkway inside the gate.
All the capstones on that small wall are gone.
The crew didn't work yesterday because of the rain, and they are doing all the demolition of the driveway by hand, so the neighbor and their friends were back last night and pulling stone from the bin. I'm not sure why they didn't take more from the driveway, but it's not my problem.
And so this is what the front of the house looks like at the moment.
And if you thought the step was huge before they started, it's a GIANT step at the moment.
And yes -- I keep using the front step and jumping down and then taking a HUGE step up. The girls are confused.
Even the interlock on our front step is gone. It looked like this early in the day on Monday. Porch pickups will be a challenge for a bit! It'll have to be side door pickups!
And now it looks like this. I keep forgetting and almost lose my footing since it's not the usual height.
We still have stones in the driveway, as I'd say they have completed about half the demolition. This area at the end of the driveway got cleared.
Which made room for the porta-potty. Yep -- a bright green and yellow porta-potty on the lawn! Why not!
I transplanted the irises to the backyard last night and the hostas as well. I needed some new plants, so let's hope they survive. Here is the home of the new hostas, and NO -- I haven't reached this part of the yard in my weeding process, but that section is next.
The irises got put in some empty sections (near the middle of the photo), and the back half of the garden is almost completely weed-free. I had filled my bucket twice with weeds, so there's just a smidgen left and then I'll move on to that other garden.
While our yard is not huge, it's significant when you are wedding. I work at it in sections, and I've got three more areas and then the flagstone which I'm leaving to the end as it's the part I hate the most. I won't get it all done before I go, but I'll try.
It's like our backyard has different zones. The cool, wet zones near the house and the dry, hot zones on that hill. Some plants do amazingly well, and others do not.
I had a cedar that was growing gangbusters and overtaking some other hostas. So I asked the guys if they could remove the cedar and let the hostas grow bigger. Mission accomplished.

And all the while, the sentinel is surveying the entire operation! She loves to sit in the window.

I was stopped by two people on Monday telling me how cute she was sitting in the window to watch. During my afternoon (and dogless walk), I was on the street, but they all recognize her! I have to say that at least the dogwalkers are becoming way more friendly than we've ever been, which is a great thing.
Here is the customer quilt I finished up last night. If it looks familiar, it is. I quilted one just like it several days ago, but in a different color.
I usually trim customer quilts before they leave the house, but I don't think I'll trim this one. The edges are very uneven, and I don't want the responsibility of choosing how to trim it. 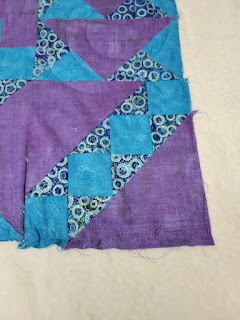