And so the adventure begins I don't have access to Grammarly and working on this folding keyboard so please forgive me if something is off.

I got to the airport with plenty of time although I think the Uber driver took the long way to get there At least they get paid by the trip, not the time, so I didn't really care. Let me say that the NEXus card is worth its weigh in gold. I spoted the line for security and it stretched a long way down the airport. Then I spotted the Trusted Travellers line and there was ZERO waiting.

That is so worth the money. And all I had to do was remove my little bag of gels and shove eveything into one tub and I was good. Then I had a two hour wait!

I did NOT remember how long a walk it was to the international departure lounges. A long walk But I'm testing out that weight in the backpack, so its all good. I swear I hate PEOPLE The airport was packed and just crowded.

When it was finally time to get on the plane, it was chaos. thankfully we all had seats or there would have been a stampede And many of us were standing in the line for the flight to New Delhi!!  DH says could I not tell by the ethnicity of the travelers that I was in the wrong spot. OK  -- so he's right.

And it's no wonder things take a long time. People don't have their documnets out, they don't take their mask off when they pass the agent and people assume that Zone 5 is the first one to board. I don't think so!!!  When it came time for Zonee 2 to board, I had to wade through TONS of people to get to the front of the line, Granted it did NOT help that there were two large aircraft loading at pretty much the same time at gates next to each other.

For the first time in a long, long time, I got an interesting seatmate. She is newly single, from BC and heaing for a solo trip through wine country. So we had a good chat and ended up meeting up a couple of other times as we worked our separate ways out of the airport.

We had to use stairs to exit the plane and that plane was HUGE. It was the 777 and you dont realize how tall and big those things are until you are on the tarmac with them. I don't know how many people it holds, but it's a lot! Makes you wonder how sonething that large can fly through the sky!

I got a SIM card -- had to buy a new one --- they just told me it was better and it was a better deal -according to them. Anyway I found a quiet spot to sit down and load the card. Almost lost my own card. Now I have to register the new card and am having trouble and it seems that I can receive things no problem - not texts or SMS of course, but I'm getting e-mail and Facebook updates. And I can community via What's Up, Go figure but then the Monday ladies will always be in the know since they are the only ones I can send notes to during the day if I'm not on Wi-Fi.

I got a ticket for the train to Paris and got off at the Denfert Rohereau station which is the one closet (on that line) to the Gare du Montparnesse which is where I need to catch my train tomorrow.

Since I had time to kill, I wandered around looking for a cheap hotel. I was on my way there when my phone died. I am NOT good with Google Maps and walking I hate it and as I was within 250 Meters, I was lost. The streets are so twisty and angled, that I was not walking all over to find it. I spotted another one as slightly more money and I got a room and had a nap! Which felt great.

Then I was off to geocache for hours. I happened upon two Adventure Labs which are like little tours and you have to answer questions along the way. I ended up in the Montparnasse Cemetery which is very OLD. Wow  -- some old crypts and is filled with many famous literary characters.

I managed to get all the answers to that one, although it took me a long time to figure out how it worked, but then I was good.

So off to the next one where I walked for MILES to get all the spots. And it was completely in French and for the life of me, I struggled with the wording on the second question. I was NOT going to give up after walking over 1 KM to that first spot. After studying the clue a bit closer, it was pretty darn obvious what the answer was. I must have been tired! And then I walked to the others and I swear I took evey wrong turn. And I'm suppposed to be walking 800 KM by myself? Oh boy.

However, I succeeds and got more points for geocaching. I think I got 100 today and I still need 130 or something like that.

It was a foty minute walk back to the hotel and I thought I would pick up my train ticket for tomorrow. Hmm - only machines. I swear I booked a ticket before I left home, but apparently not. I did NOT see any charges on my VISA. So I had to buy a new one and instead of leaving at 10 AM, I could only buy one for 4 PM. Needless to say, I was not happy, but this happens when you travel -- be flexible.

I bought the ticket and finally sat down to have a beer and a salad. That ticket situation was niggling at me and I found I could buy tickets ONLINE for 10 AM. So I bought one.. REmember what I said about solving a problem? Throw money at it, but don't tell DH that!

Then I went back to the train station to see what to do about the 4 PM ticket No one to talk to, so I canceled it at the machine and got a refund. Let's hope I didn't buy a scalper's ticket!!

If you hear some loud profanity -- that will be me!!!

I don't know what else to say except that all my gear has worked amazing. The clothes are comfy, the waist belt is so amazing and I have to keep checking that it's still on as it's so slim and small and I wear it under my shirt. I LOVE it The backpack wasn't that heavy but I know after a full 6 hours, I'll be very happy to take it off. My feet are tired, but that's to be expected. I hope that once I start walking on the dirt trails and off the pavement, there's a bit more give.

OH --- what am amazng city Paris is. I've been here before, but it's so clean, people are friendly and there are tons of e-scooters and bikes. I swear if anyone of those crazies riding the e-scooters has a fall, it's going to be a game changer!!!

And did I mention the heat? Oh yes -- it's hot here. HOT!!! But I wore my long pants all day, and I can only hope that in the country it'll be a few degrees coolers. It's beautiful out now.

That's it for today. I have no idea how to add photos to the blog posts. I did post some to Facebook and I'll try to figure out how to add pictures here. 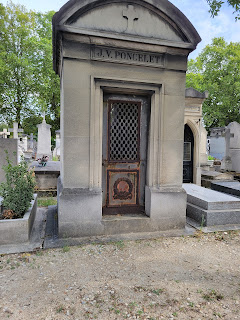 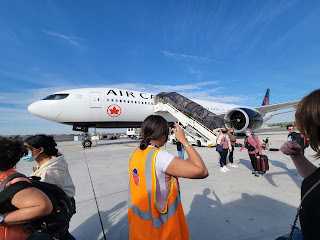 I figured it out. Bye