Meet me at Q

There's no place like home, even though I've barely had any sleep. It doesn't matter; I'll be having a BIG long nap this afternoon.

So that wasp stung me the night before, and other than the initial bite, it was fine. But now the blasted thing is itchy. And it's probably too late for AfterBite to do much good because it's still itchy after some liberal application of the stuff!

And why is my e-mail not updating so I can download some pictures for you? I've rebooted the computer and restarted the e-mail program, but it doesn't want to sync. It must be out of touch with how it works!

Everyone has asked me about my travels, mainly through the Toronto Airport. Is it really as bad as they show on the news? Are there lineups? Well, I honestly didn't have any issues anywhere. No problems with security, no issues with any sort of lineup, although I had to be swabbed as I went through security last night -- I forgot to take off my watch, which I think is setting the security alarm off when I walk through.

My flight was delayed by one hour, but that was it, and I hardly call that a hardship. So that brought my scheduled arrival time to 1:09 AM. Yes -- you can see why I'm going to need a nap today.

But when we arrived on the tarmac, we had to wait for a crew to come, which took another few minutes.

And I swear, after sitting for three hours, your legs and knees forget how to work. You are trying to get up that ramp from the plane, pulling your carry-on, and you want to go fast, but your legs do not work properly. Never mind that you have worn a mask for the last 6 hours, and you're now huffing like a chain-smoker.

Obviously, some planes were canceled because people were camping out at the airport and were in the gate area and the area before security. But the luggage room was a bit of a shock as there were PILES of luggage everywhere.

OH -- I just tricked the e-mail into working. Here are the pictures I got last night.

I realize that the floor was not completely covered with luggage, but it literally looked like an abandoned area. Luggage was still on the carousels, or piles were beside the carousel. 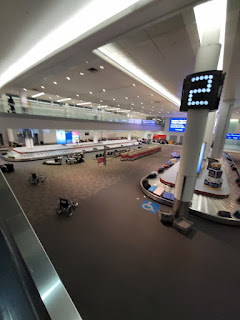 And there were piles of it crammed in the corners. 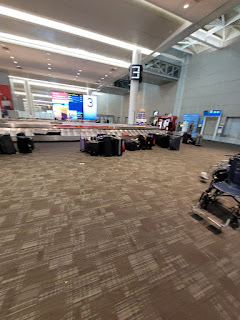 Need I say more about ONLY using a carry-on. As I mentioned yesterday, I have no idea what I would put into a large suitcase if I went somewhere, and it would be mostly empty, and I am NOT buying anything. I didn't even stop at a single quilt store while I was out there, and the only thing I bought at Quilt Canada was a novel.

I stopped at my favorite bookstore (Robinson McNally) in Saskatoon and purchased another book and a magazine (I know!), but that was it! I did bring a few things home that I rescued in the search, and I put what I could in my suitcase, and the rest (a small box) I mailed to myself before I left. I will cull a few treasures from it and toss the rest, but it was too hard to do all that there, so it got shipped home. Nope -- traveling light is the way to go.

So without too much ado, I ordered an Uber and arrived outside. But I'm supposed to be at Column Q, and I have NO IDEA where that is. A little fact that DH forgot to mention. So if I'm at A or B, does that mean Q is much further along? That can't be right. So I asked, and Q was downstairs. AHA - that was where most of the action was.

I wasn't a fan of Uber, but you have to say that it's pretty darn slick. You have all the info set up, the payment goes through the app - the tip is automatically calculated, and the amount is predetermined, and you just relax. Next time, I'll know where Q is! I wasn't a fan because I didn't know how it worked! Now that I know -- I'll only take a cab if I have to!

OH -- when we flew in last night, it was the first time (that I remember) we came in over Lake Ontario. We're flying over the city's lights, and there's a big black void! I don't know if it was because of the late hour or because some runways are shut down due to maintenance. And then we taxied FOREVER before we got stopped and had to wait for the crew to arrive to open the plane!

So for those who think travel is glamorous -- it's far from glamorous. It's a long day; it's become costly and extremely volatile in terms of delays and cancelations. I wouldn't trust air travel too much these days. And if you have luggage, that's a whole other thing. Travel at your own risk!

Before leaving my brother's house, I had a bit more tidying up. Oh my. Do any of you (the ladies) remember these little pamphlets we got as we were becoming young women? I found a few of them in my stuff.

And I saw a couple of clues as to why I am how I am today. You know we all like to collect things, and I often do that and never touch the items I've collected. Like magazines -- although I am going through them.

So I found a scrapbook full of puzzles (if I didn't read or quilt, I'd probably be doing puzzles). Well, the pages were FULL.

And only a very few of them were done. So I was learning some bad habits when I was a kid. My Mom had zero issues about us creating scrapbooks, and obviously, I scoured newspapers to find this stuff, cut it out, and saved it, but never went back and solved the puzzles. 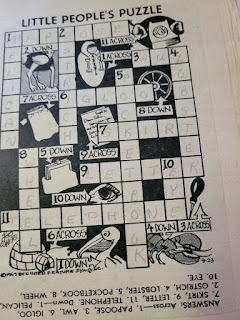 That was a nasty habit, and I wish I had not learned that one. I'm trying to remedy that, and at least I have stopped buying stuff.
And I found this from the time I was in the military program (one of the streams of Katimavik from many years ago). It's the alphabet for radio communications!

Needless to say, those items above went into the recycling before I left.

I had a last visit with my parents, and we chatted more about our memory books -- and I now have a big task ahead of me. But I promised and want to make it happen, so that's on the agenda to get organized next week.

This week, I have class prep, and I want to reclear that tabletop so I can lay out this memory stuff and go through it. I NEED to make this happen as what I saw out there was disturbing, and I don't want any part of it. I am comforted in the thought that what I'm dealing with is so little compared to what was there. I know the difference between junk and good, and so what junk I have, I can part with it.

And I'll keep culling until there is practically nothing left. There is NO NEED to keep any of this stuff -- well, most of it anyway.

On that note, I'm out of here. It's going to be a silly day as I know I'll flake out for several hours, and that will put me out of sorts tonight, so I have to balance that, and the girls were so excited - well, at least Murphy was! Lexi was trying to play it cool!