As you probably figured out, I'm in a different time zone -- 3 hours difference, and it's going to be hard for me to get the blog to those who read first thing in the morning unless I write at night and, well, sometimes that won't be possible! But that's OK.

We had a great day here. And who are WE? That would be my Aunt Yvonne and me. This is the first time there has just been the two of us. In the past, our entire family used to come -- that was MANY years ago. Uncle Joe is gone, the grandparents are gone, and my parents won't travel any longer, so it will be sparse for visits. But we had a wonderful visit.

There was lots of reminiscing and PLANS to make some kind of memory book. And if we don't start now, it'll be too late. I know two drawers in the office are filled with paper precisely for this project. I'm adding it to my grand list of TO-DO things, and as I keep saying, it shouldn't take long to do, so why am I not doing it.

It's not for lack of information -- I think we have tons of birth certificates, death notices, pictures, and other information that it's more of an assembly job than anything else. And I need the knowledge of Aunt Yvonne and my Mom to make this happen as I do NOT know enough on my own.

We were looking at a book that my Great Aunt Molly had put together, and it was simple with a few pictures, some written information, and anecdotes of her memories of the various people. That makes a whole lot of sense -- you don't need a blow-by-blow of their life. And to make it even nicer, I'd make it into a digital book. The biggest problem will be finding decent copies (if we don't have the original) of some of these photos.

So yes, even though I have loads of quilting to do, I think the family book should take precedence -- at least to get it started and get everyone on board with adding a few anecdotes. What's your favorite memory of your grandparents? Or you aunts? That, to me, is more important than every detail of their life.

We started the day by geocaching. I know! There was one not far from the house, but I couldn't find it, so we went a little further along, and I found one in this box, and I had something to drop off in it, so mission accomplished.

Oh -- speaking of memories, remember that buffet I showed the other day -- the one with the dusty shelves? Well, I thought it belonged to my grandparents, and nope -- it belonged to my great grandparents! And Yvonne mentioned that she remembered that on one of the little shelves, Grandma Leech used to store a cookie jar.
This is the cookie jar that used to sit on that shelf. Do I want the cookie jar? Nope -- but I have a picture of it. It's just a neat little jar, and it would be awesome sitting on the shelf with cookies, but then I'd eat them.
Then we popped into town to drop off some recycling. Yep -- I earned my keep by switching out a printer and got the iPad to print to the darn thing. Who knew I could do that? If you think recycling back home is a hassle, then come here. There is no recycling pickup, so everyone comes to the depot with MANY bins, and each one is clearly labeled with what goes where. It's excellent and makes it easy to drop stuff off.
I'm sure some people do not recycle, but all the garbage must be trucked off the island, so dealing with lots of waste becomes a big deal.
Then we were off to the hardware store. Well, even though it's a Home Hardware, it's much more. It carries EVERYTHING -- it's like a department store, and if you want art supplies, they have that. If you want sewing stuff, they have that. If you want lawn furniture, dishes, whatever -- they sell it.
There used to be a quilt store on the island, but it's been gone for many years, and people couldn't buy sewing supplies. They have a well-stocked corner filled with notions, yarn, and tools.
There isn't fabric, but they have By Annie's mesh for bag making. I thought that was hilarious, but maybe people are using it for mesh bags or something. No idea.
We used to hit the bookstores and the little galleries every time we came, but I didn't stop. I don't need anything and don't have room to carry it as my bags are jammed. Well, as jammed as I'm going to make them.
On the way home, I got dropped off a couple of KMs from the house so I could somewhat of a walk into the day. If anyone wants to compete with me for steps -- this is the week! Here's a picture of Mount Maxwell. I haven't been up there in years, but it's a great view from the top  -- no, I did not hike up it -- there's a road.
I spotted many mirrors along the way to help people get out of their driveways. This is the main road from the small ferry to Ganges (the main town), and it can get crazy with traffic when the ferry docks. And I've seen lots of cyclists on the road. 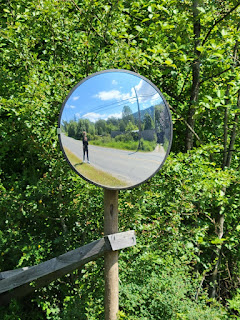 There are all kinds of stands along the way selling everything from fruits, veggies, and flowers. They were all on the honor system, and I wasn't in for buying anything but noticed them on my walk. OH -- there was even one selling specialty coffees and goodies, and we stopped by that one in the morning! 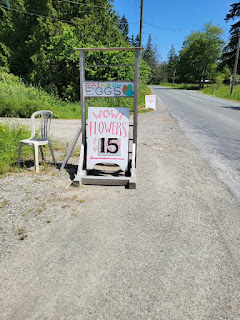 Then we did a bad thing. We decided to go back to Ganges for dinner to have fish and chips. I mean -- that fish had better be pretty fresh! We went to the Oystercatcher, the "fancy" restaurant in town.
It was a tad chilly, so we sat upstairs inside and had the entire section to ourselves.
But what a view of the inner section of the harbor. We watched the school boats come in, and there were loads of sailboats moored in the harbor.
And how about this big one! I would like a tour just to see what it looks like. But we minded our own business and didn't stop by.
So there it is - our fish and chips and I have to say that it was delicious. The chips were crispy, and the fish was fresh. I notice that the traditional cole slaw has been updated to kale slaw!
And then we were naughty and splurged and had dessert, which was to die for! The unbaked cheesecake was worth every bite, and I hope to work off some of those calories in the next couple of days.
Sadly, I must move on this morning to the next stop on my trip. But I MUST get my butt back here more regularly as - well, not to be morbid, but we're all getting up in age, and one day, visiting won't be possible - at least in person.
On the home front, they continue to get the forms ready to pour concrete. I hope this is just how this picture has been taken, but those steps look uneven to me. I think the concrete supports the pavers that will make the steps. I guess I'll see when I get home. I trust them, but should I???? 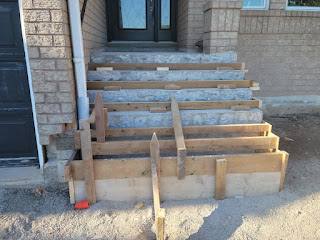 Actually, when I look at it now, I think I know what they are doing, so we'll see, and it still looks like a giant step on the bottom -- I suspect the height of the new driveway will fix that. It seems solid, and let the crew pour concrete today!

Notice that the damaged bricks have been removed, and it looks like the drain pipe is back together without the silly little funnel thing that was originally there and caused it to block.

On that note, I'm off to have some breakfast and then finish packing, and I'm off to the next exciting stage of the trip.