Oh my --- we seem to be having some PASSIONATE discussions on our Zoom calls lately. Yes -- I am pretty opinionated, and well, some of those discussions come onto the blog, as in the cost of those fabric kits. I have another issue about that, but no time this morning.

I will say that we are all still friends and have no hard feelings. We did have a great time at the Virtual Retreat, and we met Debbie again, who has walked a Camino! That was exciting, but I didn't want to bore the rest of the group to death, so we'll have to discuss it separately at some point.

And I learned that others are walking in hiking sandals and liking it, so those are a definite buy. Thanks to Nina for suggesting that NOW is the time to buy them since they will most likely be on sale, and yes, they are, so I need to make a couple of purchases. It's probably too late to wear them now, although the last couple of days have been super hot, so you never know. And GASP -- I might start wearing socks and sandals for winter!

Anyway --- I'm off to spin class this morning. I've barely been for almost two months, but after this week, I hope to get back regularly.

It was foggy yesterday morning and very eerie outside. A fire truck and an ambulance passed me, and within a few hundred meters, their flashing lights were lost in the fog!

If you think Murphy is deprived of toys and I should buy her new ones, think again! This is a brand-new toy that she finally decided to play with. She had one like it and destroyed it, so she got another one! No -- this dog is not deprived! And she's darn cute, to boot!
I didn't get a picture of it, but Lexi spotted Wednesday in the forest on our walk. Wednesday is a boy Husky. Well, she flipped out and had me running as quickly as I could through the woods so she could meet up with him. She NEVER does that for other dogs. Well, they had a good time jumping around and sniffing each other. What a silly girl!
I finally managed to turn on the sewing machine and get something done! It feels like it's been forever since I did that.
The giant quilt got loaded on the long arm, and I got to work getting it quilted.
It is now quilted and trimmed and ready to put the binding on.
And lucky me, I get to put the binding on for this customer. Yes - I do it sometimes if they want. I wasn't sure if there was enough binding fabric, as I had to take a little strip off to fix that short row, but I got lucky. There was just a tiny strip left over. I think I may have one extra binding strip, but better to have one more than not enough. That was cutting it close because I didn't have a Plan B!
The binding is now made and ready to put on during Monday's sewing.
I think I will try and push to get another eleven Quilts of Valour quilts done by November 11. Is that going to be possible? It's a lot of work as I don't think the backing is made for any of the quilts, so while one is being quilted, I'll have to prepare the backing for the next one. To my knowledge, only one has the backing. But it would be nice to get another eleven out of the house. I'll see how it goes.
I'm going to focus on Project Linus (or older youth quilts) in December, and there are about 30 of them I would like done by the end of the year! I have to try and catch up to Diane!
Speaking of bindings, I managed to get the binding on ONE of the Project Linus quilts. One down and nine more to stitch to the front of the quilt. Then there are still 20 quilts to bind! And I want them out of the house by the end of November. It's all doable! I can't let these quilts pile up like I've let other things pile up. So even if my work gets delayed, there is a lot of satisfaction in getting these done, and the amount of space I'll free up will be enormous. It's all good!
I decided it was time to sort my threads to assist with the binding process. This is all my 50-weight thread. Well, it's not all my 50-weight, but all you will see today. It started out being all contained in one drawer, but I now have two overflow baskets -- the orange ones in the photo. The problem is that some colors were in the drawer and the baskets. So while we were on Zoom yesterday, I decided to sort them.
It's not perfect, but much better than it was, and it should take less time to find the appropriate color. 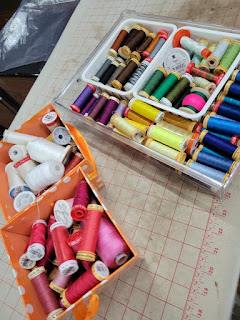 I should go through the remaining FIVE drawers of thread and sort them as well. They are a mix of everything and stuff I'm not using because I don't even know what I have. Perhaps a project for later today once that binding gets put on.
There is much work to be done, and there seems to be so little time. It's all a question of prioritizing - new classes have started, new clubs will begin in January, and I have so much to learn and experiment with. But that keeps me going - if I had nothing to look forward to each day, I don't think I would ever get out of bed. Let's hope that my brain still craves the challenges I deal with every day (and I don't mean significant challenges); sometimes, the challenge is as tricky as finding the right color of thread!
On that note, I'm out of here. I believe I will have to scrap the windshield this morning, and I must make a note to turn off the outdoor water tap.
Mark your calendar for the next Virtual Retreat -- It's November 26 and 27. We had a blast, and always fun to chat with whoever comes on the call! They were still chatting when I left at 9 PM.
Have a super day!!!!
Ciao!!!