Well this is the last retreat of 2022. I will say that there were a few of them this year, and I've enjoyed every one of them. Yes -- I am spoiled and I truly appreciate all my friends who have made the retreats possible. I would NOT be renting a house just for me!

There are retreats booked for next year and I believe all of the spots are full! That's how much we love our retreats! We are at Seams Appropriate near Huntsville in case you are wondering!

In the past, we have always gone to the same house every time, but there has been a lot of change in the area of retreat houses and this year, we've been to three different locaitons. We were unable to book this one for next year, so we'll be attending only two different ones next year. This is the furthest away, so I am not too disappointd that we won't be back. I'm not good with long drives, although yesterday, I was fine.

I had my thriller audiobook on and a cup of tea and I was fine. I'm saving the rest of the book for the drive home.

The leaves were spectacular, but not as much as I would have thought. Some of the leaves have already fallen and there's a lot of evergreen type trees along the way and honestly, I thought the leaves in my forest were more spectacular, just fewer of them.

I had a bucket of stuff packed with odds and ends of projects that have been in that bucket forever! I decided though that I need to be working on my current projecs for the classes this coming weekend and UFO homework, etc.

So those projects got packed up into separate big zippered bags and I left most everything in the car and will get one project at a time. Why bring everything into the house when I've no idea if I'll have time.

Well, I'm on my third project of five so I may end bringing that bucket in after all!

I started off with my butterfly quilt. I've had an ongoing class for this project since January and we are almost done. BUT I have a new class for the butterfly starting this weekend. I took it to the retreat in August and got a lot done, but it was back on the desgn wall, still in pieces. I carefully put everything in the bag and then dug it out yesterday.

BUT I can't finish it. Why? Because I seem to be missing a piece of background for BOTH sides in the same spot, which makes me think that I did NOT cut it. So everything got together as much as possible and I still have the middle section to do. So it didn't get as complete as I would have liked, but it won't take long to get it all together.

So that project went back to the car and I pulled out the next one which is also for a class this weekend. I wlll not share those pictures with you -- it's a surprise for the class, but I was able to complete that work as well.

Back to the car to get the third project! I'm ripping through these things like mad! So I made good headway on my UFO homework, only to disover that I'm an idiot. I need a fabric to finish off the section -- I need ONE 2 1/2" square of light blue and hopefully someone will have something today that I can use.

This project has been hanging around for years and in my mind, I needed a LIGHT orange (which was in the bag), but when I really looked at the project, I need a light blue! I was hoping to get that project completely finished, but I can only finish part of it, which I will likely finish way before lunch today. Good grief ---

I forgot to take a picture of it, but you can see the corner of it in the picture below. And what's that you say? One of the attendees, who is a Star Wars junkie, has this massive mouse pad. Seriously?? Apparently, it's a gaming mouse pad with a lighted perimeter! Hey -- if it works, go for it!

I took a walk in the afternoon and went down to the lake. This was the view as I approached the shore.

Now, how could you not sit down for a few minutes? That was so inviting and the weather was beautiful.

The water was quite choppy but I spotted a couple of kayakers on my right. With toques on, but I imagine it was cool on the water.

And then we had some entertainment in the afternoon. I turned around to grab something on the window ledge and spotted a deer in the backyard which backs onto a forest. Then we spotted a second deer and finally a third.

Back on the home front, I had to walk the girls very early and I spotted a fox darting across the street as I opened the door. It was not a good time to walk in the forest as it was dark, although I wouldn't have an issue, but with both dogs? That's asking for trouble.

So we walked through the park, which is also dark, but has motion detectors on the solar lights. So as you walk, they light up! 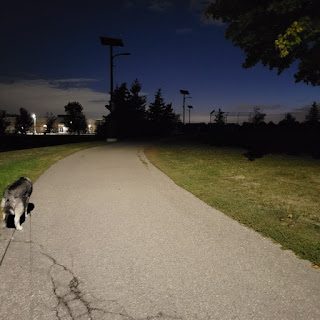 And I received this picture from DH. I guess Lexi has taken matters into her own hands. If she wants to sleep on the sofa, she will do it whether he is there or not!!! She's usually very timid about things and I guess sleeping on the sofa was more of a priority than being scared that a table was there. I guess, we should probbly just take eerything off the sofa.

And I'm sure that Murphy would do the same and probably does, but she has bladder issues sometimes when she sleeps and I don't want her on the couch becaue of it! The poor thing takes medication for it, which seems to work and we just have to watch her to make sure she pees before bed. Just like a little kid -- very high maintenance. Like a child, she is more interested in chasing stuff than doing her business!!

Well, that's it for today. I must get out for a walk today as rain is forecast for the next two days and I will likely not get out -- I do have a raincoat but no umbrella, so I guess it will depend on how much it rains!

PS -- I had to manually proof this so I'm sure there are lots of grammar and spelling issues --- where or where is Grammarly when you need it?