I admit that my grammar is not my strong point, and I hated English in school. All those rules about dangling participles or whatever they are called and what verb tense to use, and let's not confuse worse and worst! I admit that my grammar (hopefully) has improved somewhat with all the writing I've done over the years, and I have to thank Grammarly for that.

I would say the most significant error for me is being too verbose! I add words like "do" and "that" and others that do not add value to the sentence and make it harder to read!

So is it any wonder I was reading a book last night and hated the writing style? I seriously don't think there was an editor. Here's an example: I do not mean to pick on this author -- it's just me.

"As mentioned, Wasgij are a specific challenge as they don't show an image of the completed puzzle on the box, instead you are required to use your imagination, with hints on the boxes ranging from showing you an image with a few of the objects in the puzzle included so you know their placement, or telling you the image is based on what a certain person on the box can see."

While I understand what they are saying, that is a mouthful! Here's how I would rewrite that sentence.

"As mentioned, Wasgij puzzles are challenging, as the image on the box shows parts of the puzzle but not the final image. Along with that image and several hints, one must use their imagination to complete the puzzle.

Anyway --- it's all very interesting, and now I wish I had been more attentive in English class. I might not need Grammarly! Despite the language, I enjoyed reading about jigsaw puzzles and learned a few things!

We had another great day at Sew Productive in Acton. Melinda is a wonderful person and so enthusiastic, but like any new venture, she's got a lot to do! And I realized when I got home that I had only snapped one picture of the store! The serger thread rack, but look at all those rainbow colors! 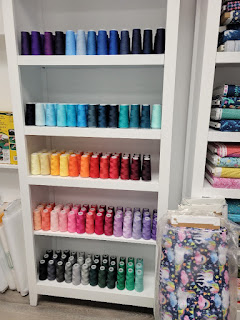 We had an excellent turnout for the sessions yesterday on quilting and embroidery! And it was great to see so many people from classes in the past. I also managed to find the PERFECT fabric for an upcoming project for A Needle Pulling Thread, and I picked up the perfect backing for it as well. Now I need to get myself in gear and get working on it.

If you haven't stopped by the store yet, be sure to do so to check it out. It's called Sew Productive, located at 47 Mill Street in Acton. Technically, the entrance is on John Street, so when you get to the leather shop, go down the block partway, and you'll find the door!

There are lots more stock coming -- threads, fabrics, notions, etc., so be sure to check it out and keep returning. This is the only way we can encourage new stores to open and for them to become viable businesses in the community! She's also a Husqvarna Viking dealer so if you need something for your sewing machine or want a NEW one, pop it!

I don't usually travel with two large suitcases (it's a long-standing joke with my colleagues), but I took two suitcases on the first day. Mainly because one was still packed from the guild talk a couple of weeks ago, and the other was still packed from Salon Quebec. Before I left yesterday, I had to unpack and sort them. No need to take loads of stuff -- just take what you need. But I still had one large suitcase and lots of tote bags! I have no problem taking loads of things in the car, but I'm conscientious when I fly!

Today, I get to stay home. I have a class tonight, and I'm not done with the quilt. I'm still hoping the background fabric will jump out at me, but I don't think that will happen, so I'll just grab another white fabric to finish it off. I HATE when that happens. And the moment I cut into the new stuff, the old will appear! It's supposed to be in the project box, but it's not, so what could I have done with it?

Those girls of mine are such characters. I don't usually walk them together, but I've had to the last couple of days. Yesterday when walking, I heard Murphy give a YOUCH that she was in pain. What the heck? It appears that Lexi's retractable leash got caught in the fluffy hair on her tail, and it must have taken five minutes to get it untangled!

Of course, they were not interested in sitting down to wait, so it was "fun" to make that happen. Today, we're back to two walks, and I'm not sure who will be happier -- them or me.

I almost lost Murphy amongst the leaves! 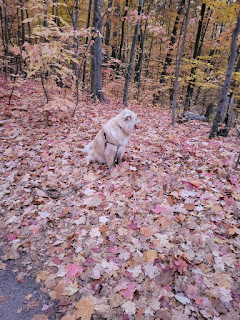 That's a bit hard to do with a black dog! 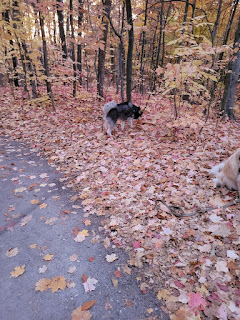 And I swear Lexi has become a Princess. OK -- so she was always a princess, but now, she thinks the sofa is hers! Yesterday morning, she was curled beside the table, and DH did not put it in the right place, so the skittish husky has zero issues getting up there.

And she jumped up without a second thought when I went to have a wee nap after dinner. DH called her a traitor. Yep, she cares about the sofa, not who is on it!

On the other hand, Murphy is quite happy to lie in the flower garden. I've no idea why she plunked herself down here, but she did and was happy as ever, with her ball beside her.

Or she's busy watching TV. When she hears her favorite commercials, she comes running!

Well, I'm off. There's a lot to accomplish today. I have FOUR presentations to prepare, but I've already made a good stab at two of them, and the others won't be as bad. I'm excited about our two new classes that start tomorrow -- using pre-cuts and scraps. Oh boy --- I think we all have SERIOUS issues! I can't wait to see where it goes!

Don't forget we have the Virtual Retreat this weekend. If you're new -- this is just a fun place to gather on Zoom and chat. We've met so many interesting people over the last couple of years.