I'm amazed at how focused I am here and how much I have accomplished! I even managed a long walk. Anything can be accomplished when there are no distractions and you are motivated. Now, if I had brought all that missing fabric, I wouldn't be quite as far ahead, but I would have some more finished projects, but that's OK.

I managed to finish one of my UFO projects (due on Sunday), so I've saved myself a $10 penalty. I won't show you the homework yet, but suffice it to say that it's made of 2 1/2" squares, and YES, all the seams are twirled on the back.

There is one more section to complete, and then that quilt top is done. It's been hanging around for almost 10 years, so I'll be happy to see the end of that one.

Then I dropped that in the car and got the next project. This one was completely cut and sitting on the current project table. Because of the incentive to finish the Quilts of Valour quilts, and this is a quilt for that organization, I wanted it done.

I designed the pattern for this one, and you can find it for sale on the Quilts of Valour website. It's pretty easy to do -- really making some hourglass blocks and adding borders, but the overall effect is pretty cool. You can use a panel, or the pattern has a substitute for the center. The pattern is called Beads and Baubles.

I was determined to finish the top last night, so it was a bit late when I went to bed, but that's OK. I was cutting the length for the final top and bottom borders, and this is ALL that was left. It was meant to be!

And here I am sewing the last seam.

And here it is!! This finishes at 60" by 72", which is my generous lap-size quilt, and I have to say that it went together like a dream, and everything measured out exactly as per the pattern, but trust me, I measured each of those borders as I went. The hourglass blocks were ALREADY prepped.

I have the backing fabric, so I'll make the backing today and the binding, which can go in the "to be quilted" pile when I get home. WOW!!! I was so excited to see a project from the current project table get completed!

There is one more project in the car, and I also have a small quilting project that is part of my UFO and then I'll hit the reserve bucket of projects in the car. There are enough small fiddly things to keep me busy for the rest of the retreat, and it'll be nice to get some of those done. Who knew I'd fly through the projects so quickly?

We had entertainment out the window of the sewing room AGAIN. This time there were four deer, and one was quite close to the house. Apparently, they were also eating in the front garden right by the front door!

It's hard to see, but three deer are on the edge of the forest. The glare of the window makes it hard to take a picture.
They are so curious about us!!!
After they left, we were then entertained by a squirrel. I think he was jealous of all the attention given to the deer. As I grabbed my camera and told him I would take his picture, the darn thing sat up and posed! Oh shoot -- I didn't grab the right picture -- well, that's OK.
Thanks to Maryke for the delivery of Tim's. She lives relatively close by and made a stop to visit with us! Great to see you, Maryke!
I was on dinner duty last night and had brought NOTHING, so I was off to pick up something and then back. Then it was time for my walk, and I had brought four books to donate to Steve Little Free Library, which is just over 3 KM away from the house. Before I left, Lynn looked at the books and kept one, so I went with my three books to swap.
There were lots of things to see along the way -- a bunch of cattails along the road, but I was smart enough to not get too close as they were in a big ditch, and if you looked closely, you could see the water! No wet shoes for me!
While the leaves are past their prime viewing, there are still pockets of brilliant leaves. It's just stunning to walk along the road and see and hear the leaves falling. This is one of the reasons I like living where I do. I like to see the changing seasons, and perhaps this is a higher beings way of saying, yes, the cold is coming; here's a little treat before that happens!
There's a donation or return box at the little library- it's quite a civilized free library, and all the books are sorted by genre. I donated my three books, one of which is a best seller I bought for my plane ride home from Spain, so that should be a hot commodity for the next visitor.
And here's the little library. They converted the school bus shelter into a library; everything is so neat and organized. I found three books (thrillers) that seemed intriguing, and I walked back. It took me 1 and 1/2 hours to get there and back. I walked at a brisk clip and had ZERO issues with my feet. More on the feet another day. Suffice it to say, they are still peeling like mad! But after fixing those new blisters, which are now healed, nothing new has happened.
Oh -- here's another tree shot on the way back.
And this beautiful leaf on the pavement was calling my name to take a picture. 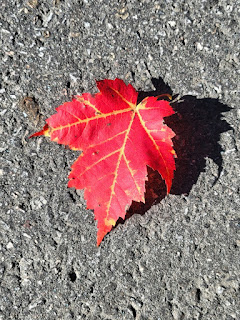 This is the sign at the gate of Seams Appropriate. It's made of wood and very beautiful.
Ronda decided NOT to bring her sewing machine; she brought her Cricut instead and has been having fun making stuff. Let's just say that there's a lot of experimenting going on, including hair spray and glitter, in making holiday stuff. No glitter has been unleashed INSIDE the house.
What are the others working on? They are sewing -- I didn't take pictures. That is their job to share with you what they are doing. But let's just say that everyone is working at their pace -- sometimes fast, sometimes slow. That's OK as, like the Camino, everyone has to make their retreat - THEIR way.
On that note, I'm out of here. I have a guild presentation to do later today via Zoom and realized that I did NOT bring anything other than T-shirts. Oh well, I'll figure something out -- Hey - I'm on retreat; they'll understand.
OH GREAT --- it's pouring rain, and I'll soon need to make a trip to the car. I should have switched out things last night!!! We have rain for the next two days. I may or may not go for a walk; it depends on how hard it rains.
Have a great day, and I'm off to get that backing and binding made.
Ciao!!!