Thank goodness I don't live alone. I would NEVER sleep. Well, that's not true, I would go to bed early and then be up at a ridiculously early time, but I seem to function best like that. DH is away, so I got up a little earlier than usual, and I've been so productive! I tried not to send any e-mail so people wouldn't think I'm a nut! Since he's gone, I didn't need to be quiet!

So you've all heard the premise of six degrees of separation, which implies that NO TWO people on the planet are more than five connections away from each other. Is this true? I don't know if it's true for everyone, but there are so many coincidences.

I went to spin class yesterday and bumped into Joseph (the instructor) on the way in. This was my FIRST spin class since I returned. Before I left for Spain, I told him where I would be so he wasn't wondering why I didn't show up to class since I'm there faithfully. We briefly chatted, and he mentioned that his friend was also walking the Camino. I wasn't sure when his friend started.

If you remember, when I stopped walking, I ran into a fellow at a cafe whom I briefly mentioned in my blog. The fellow was from Oakville, and it turns out that it was Joseph's friend! What are the chances of that?

How did we clue in on this coincidence? Yesterday, I told Joseph about my blisters, and he said his friend also had an injury that required a helicopter, and I knew IMMEDIATELY who he was talking about. What a hoot!

But here's the thing --- Richard is DRIVEN. Too driven to be on the Camino, which he just finished and has returned home this week. The first thing he said to his friends was I was more fit than 95% of the people he met along the way. Seriously -- this guy wore a heart rate monitor the entire time and HATES walking. So why was he on this trip?

It's a long story, and we had two very long chats when we were in Najera. Obviously, none of it did any good since he still hates walking! I might make arrangements to meet up with him. Oh -- the helicopter story? I didn't share any rescues I heard about, but here's the helicopter story. On the second day, there's a treacherous descent through the Pyrenees. I have since learned that you can walk on the road, which is steep but not so rocky.

Richard took a misstep and must have pulled a muscle or something -- I can't remember what he said. Anyway, he couldn't move. He asked someone to call for help -- I can't remember if he had a cell phone with him. Well, the next thing he knew, a helicopter was there to rescue him. Yep -- they rappelled out to get him and all. He refused! What an idiot! So they had to come back with an ATV to get him. And that required more people. Instead of going DOWN the hill, they went up it because it was SAFER. And to do so, they had to have a couple of people walk in front to remove some of the larger rocks so the ATV could go up. I sure hope they charged him for the TWO rescues!

Richard's thoughts on the incident? Why don't they take a bulldozer and remove the rocks? Seriously -- you are hiking through NATURE!! I must confess that I did NOT like the guy, and while Joseph used to do spin classes at Richard's club, they are definitely not best friends. You know -- we all have acquaintances!

Whatever happened to him was temporary, so he could continue walking. Actually, I think he started before I did. He only carried a day pack as he was instructed NOT to carry his full pack after his rescue. He may have continued that throughout, and I think he was staying in private albergues. He could NOT have tolerated the dorms!

But this guy is a TYPE A and probably the worst of the lot! I told Joseph to say HI for me as I'm sure he remembers me!

But what are the chances I would meet Joseph's friend while on the Camino? We could have been in the same town but ate at different restaurants or not ended up in the same town at all! Very weird!!!

There was another dramatic rescue, but I'll save that for another day.

OK --- so what tour did I take the other day? A virtual tour of some of the Amazon warehouses. I know --- who knew that I could lower myself to do that? However, I am fascinated by technology, and the tour totally blew me away! 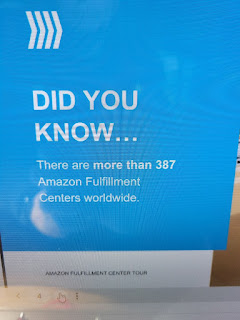 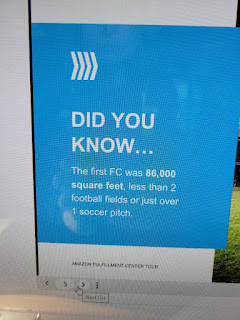 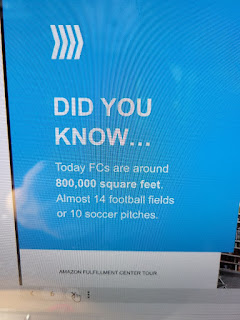 And they are DOG friendly, with as many as 7,000 dogs accompanying their people to the offices daily! Murphy would probably not be allowed to as she is a thief (more on that tomorrow), and she'd be chasing robots all day! 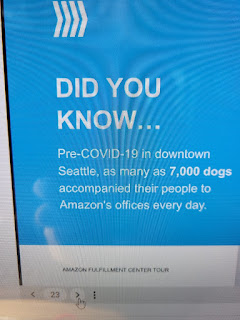 What is amazing in particular are these moveable storage units. There is a robot beneath each storage unit, which moves the units around at lightning speed and stops on a dime! I swear, it was so fascinating to watch this, and the warehouse we saw was in Utah and has FOUR floors of these units.
And there are SEAS of those storage units. The tour was amazing because they showed how they received the goods, prepared the product to be placed in those storage units, and how the orders are picked and packed. The final step is putting it on the truck.
Now I would have trouble working at Amazon as I like to put "like" things together so I can find them quickly. Not so with those storage units. Each item is randomly put on a cart. From what we saw in the video, the person putting the stuff in the storage unit had random items in his bin. The key is that everything is scanned (MANY times) as it gets moved from one place to another.
And we would expect the picker to roam up and down rows of shelving, and NOPE -- the robots bring the appropriate storage unit TO THE PICKER. And then, a LIGHT highlights where the item is on the storage rack. Now, this is where the fulfillment centers will be going -- I think they still have some centers where the picker goes to the shelves! Book a virtual tour and watch this ten-minute video to appreciate the process. It's pretty darn slick!
I have to say that it's amazing. Robotics and automation are second to none!! And, of course, it runs on AWS (Amazon Web Services), which accounts for a HUGE part of the Amazon empire. Online shopping is a small part of their business. AWS hosts so many companies that it's scary how much control they have over our world.
This brings me to the part I hate about Amazon. They have control over so much. They control (or greatly influence) how people shop and much of the internet services world. And we continue to let them! I don't let them control my shopping, but I will say that sometimes I have no other place to shop but Amazon because the item in question isn't available anywhere else. It's a complicated thing that I'm not going to get into!
I can't control who hosts the internet sites I visit. They are a data collection company (which they get from YOUR shopping and visiting their websites). That data is extremely valuable to the point that if they have a third-party product doing really well, Amazon has been known to create a similar product and knock the third party out. Not always, but they have WAY more control over your life than you realize!
Here's an example. I used to use a website for logging the books I read. It was a great site because it kept track of book series and which ones you have read. I LOVED IT. However, when Amazon started Goodreads (did you know that it is Amazon?), this site was forced to shut down because Amazon made it too challenging for them to access the data they needed. So that is one of the reasons I HATE Amazon.
They are in it for themselves and have zero compassion for competition or the little guy. If the little guy has something good, let us (Amazon) make it bigger and better and force the little guy out. Not my style! And I am sure there are hundreds of examples if one wanted to dig.
So while I hate their method, I love their technology!
I did have a good laugh at the end as there was a survey, and it wasn't just about the tour; it asked questions about your shopping habits (more data collection), and one of the questions was this.
Can you read that? Please indicate how you feel about shopping on Amazon? And I gave them a 1 (BAD) rating!! I may be banned from future tours!

Anyway --- the virtual tour is one hour, and there are some short videos you can also watch. OH -- did you know that the fulfillment centers are named after the call letters of the nearest airport? So CHA1 is the first fulfillment center in Chatanooga, Tenessee.

They tried at the end to make it seem like everyone was happy there -- I'm sure the tour guides were managers. But seriously - if your job was to scan and place packages every day and NOT move from your station (except for breaks), how happy would you be? I can't imagine I would last one day! Zero interaction with a single person, but some people may like that, so thankfully, there are all types of jobs out there!

Here is the quilt of the day.

Oh, that reminds me, I must tell you the raccoon story. There is NOT enough time in the blog to write all the stories! Perhaps tomorrow.

The next customer quilt is on the long arm and ready to go. I'm doing my own version of the Amazon warehouse, packing stuff, unpacking others, and trying to make sense of what I have! I have to say it would be cool to have one of those storage units for my books -- well, I might need several, and then at the touch of a button, a light would shine on the book I need. Yep -- I could handle that!

I had a pattern to write, and I was able to send that off yesterday. Just a few small details to take care of today (like making some diagrams!), and then that is off the plate, which is good because I have more stuff that needs to be dealt with today!

That's it for today. And if you book a tour, let me know what you think. And who wants to go on an in-person tour with me???