The last day of any retreat is bittersweet. While we are excited to go home, it's time to leave, and no one wants to go home. This retreat house is several hours away, so I had plans to leave at 1 PM, and it was exactly 1 PM when I drove out of the driveway.

However, I managed to get a lot accomplished before I left. All in all, this was probably one of the most productive retreats EVER! I've no idea how that happened.

This was my last day to take a walk to the lake, so I got myself ready and was off. Besides, I wanted to "measure" the hills. There are two of them, and both are relatively steep. This is what my Fitbit registered for those two hills.

You start by descending the hill to the lake. Then I turn left and go up another hill, then down a shorter but still steep hill. The road ends, so I turn around and come back. The deep dip is when I walked to the lake shore and then up a small side road, and then the final ascent back up the hill to the retreat house! That chart represents a distance of about 5 KM. For comparison, on one of the days in Spain, the elevation gain was close to 600 meters but over a longer distance. And the first day when we went over the Pyrenees, the elevation gain was 1,500 Meters! The number below pales in comparison! 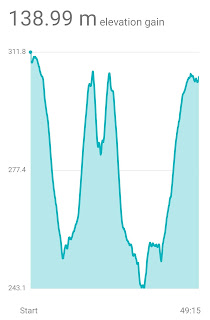 I am amazed that my FitBit can register this information, but if you want to see elevation, you have to start the HIKE feature, not the WALK feature. I had recorded the walk the previous day, but since I hit WALK instead of HIKE, I didn't get this chart. My average heart rate was 112, so I'm pretty happy with it, and I did almost 5 KM in just over 50 minutes.

Hills just don't show up well in a photo, but this is the start of that second hill, and yes -- it goes around the corner, so you can't see the top! But I can power up that darn thing now, and no problems.

Of course, there were still lots of pretty leaves. OH --- this is going down the first hill. Again, it doesn't look like much, but it's steep. I took this shot to remind me to tell you about going downhill. When I was in Spain and probably learned the bad habit here, I stepped like a little old lady when I descended. Short shuffling steps mean MORE steps and more pounding on the knees and feet.

I am training myself to take my normal stride down the hills. And I find my knees are happier, so I'm always trying to do that. It's amazing how you don't realize what you are doing until you start to pay attention! I would get passed by so many people on the downhill because they were taking a NORMAL stride, but a shuffling stride.

And I've been wearing the hiking shoes I wore in Spain, but with a cheap pair of athletic socks, and I have ZERO issues. So can you tell me why I had so much issue with my $33 fancy socks with wool and gosh knows what else? I can only equate it to swollen feet from the heat, thus making the shoe too small.

It was nice to have that waterproofing or water resistance, as my feet were perfectly dry when I walked through the wet grass. Just blows my mind, and it makes me sad a bit, but I've learned some valuable lessons here, and I'll be more aware the next time I buy shoes for the Camino. Yes -- we all know there will be the next time.
And here's my last shot of the lake. It was so beautiful and quiet -- one could stay all day, but I had things to sew, so I turned around and headed up that hill one last time.
There are a few small streams along the walk as well.
I worked only on the flannel star quilt, and I managed to sew a six-square section from top to bottom and added eight rows of squares to the bottom. It's currently in three sections, but that won't take long to sew.
I need to add four columns of squares to the sides, and I'm thinking of adding one set of four patches to each side. That should not take that long at all. I was surprised by how much I got done yesterday. Slow and steady!!!
And this is what I have left for squares. I'm sure I did the math and cut just enough, but we'll see how that goes. And YES, I twirled the seams on the back, which is why it's so easy to add to the top, the bottom, or the sides, and NO ONE will know what I did.
I made three stops along the way. I stopped at Thimbles and Things and had a great visit with Sue and Paula. It's hard to get in the habit of saying, "I'll stop at Paula's on the way home instead of Sue's." I picked up a couple of things -- you'll have to wait for that, as it may just evolve into a class. Then a quick stop at Tim's to get a tea, and for heaven's sake, I can't even order the right tea -- I asked for steeped tea instead of Orange Pekoe. And I no longer like the burnt taste of steeped tea. Sigh......
Then I made a delivery stop to Kathi's. I had some fabric for her, and when I was at the quilt show a couple of weeks ago, I won a prize: a kit and the pattern below.
Kathi really likes Barb's patterns, I gave her the kit, and I got Kathi's pattern! The kit included the pattern, and she didn't need two. So that was good -- I got that done on the way home.
Let's just say the girls were BEYOND excited when I got home. They had been here by themselves for several days. OK -- that's not true; we had someone staying at the house since DH was also away. That's the first time we've ever left them with someone else for so many days. They were well treated, I'm sure, but man -- they wanted to go for a walk. I was NOT taking them out when they were so excited. We went after dinner.
I think Murphy missed her friend as she slept in the guest room last night! Poor Murphy!
I didn't have much to bring in the house -- what a concept! And it didn't take long to get it sorted out and put away. These are the backup projects in the retreat bucket, and well, it's time to get to work on them.
I managed to put them into a smaller container.
Which is now sitting on the current projects table. It's hard to tell, but the amount of stuff on this table is diminishing! Slow and steady!
I got MAIL -- lots and lots of mail, and I got to use the fancy key for the parcel container on our new mailboxes. I didn't have my phone with me at the time, but it's a big solid thing.
I got my Trendtex challenge, so I need to put my thinking cap on.
The Cherrywood challenges also came, but I haven't opened the package yet. And I got a book I didn't take a picture of, but I'll show you it tomorrow.
Speaking of books, here are the three books I chose from the free library. They are now on the "to be read" shelf, and I'll get around to reading them soon. I did donate three books -- an equal swap.
I walked the girls when it was dark, and they were WILD. But we spotted the cutest solar lights -- those are dog paws. It was hard to hold the phone steady to get a picture with trying to contain two wild dogs tugging at their leashes.
Oh --- and here is one of Ronda's projects with her Cricut at the retreat. She etched the bottle after she put on a resist. Then pulled the resist off and put lights in. Very cool!!!

So the two presentations for the two classes are DONE! The Zoom links have been sent, so if you signed up for one of the classes and did NOT get the Zoom link, e-mail me.

I also had to prepare my lecture, and I finished that up this morning, so everything is prepped and ready to go!!!

This afternoon, I have a bunch of bindings to finish off and prep for the presentations for the UFO Club, which is tomorrow. My homework is done, which is a relief!! No late night, although last night was late as I finished prepping.