All in all, it was a great weekend. And even if it wasn't - would you want to hear about it?  Nope!

It's funny though that when you ask someone "how was your weekend?", you almost always expect and almost always get a fairly upbeat answer. I dread those that go on and on about how bad things were!

Oh well, Miss Lexi and I had a great time going for walks and visiting her friends at the dog park. I think she needs to get back blogging again!  That dog is so exhausted from her romps at the dog park, she sleeps a LOT.

When I was editing some pictures this morning, I realised that I had missed one picture from the group of Vintage Moments yesterday.  This one is far beyond where it needed to be, so I suspect it might be finished at our next meeting.

I have all my pieces for the next border on my Vintage Moments trimmed and sewn together in twos. Now I'm starting to assemble the first row.

I used them as enders and leaders as I was busy sewing up the other stuff. I know Ronda is up to date and will likely finish her quilt at the sewing retreat.  I can't let her get ahead of me!  But she's been an inspiration to get this far! And I'm the teacher.  Go figure!

I also got all these little bits from my One Block Wonder sewn in threes.  These will be assembled as part of the backing when that time comes. But for now, they're all trimmed and sewn together in this state.


While I did make good progress on my list, there is still loads to do.  I also had a couple of personal things that had to be done.  These blocks are for a guild meeting this week.  My little fishes are DONE!!!

I haven't trimmed the blocks and I won't trim them until they are ready to be sewn together.


Time is of the essence and I had to get my meal ready for the upcoming retreat.  I know - another retreat. And I'm hoping that there will be NOTHING urgent to sew.  While I like to sew, it would be nice to just casually sew once in a while.

Bottom line, I got my squashed baked for the soup that I'll be taking to the retreat.  Yum - it's going to be awesome.  I would have made the darn thing yesterday, but forgot to buy the veggie broth!


Another little goodie donated to my cause!   I love Mackintosh toffee and I love hot chocolate. Why not combine the two of them?  It was good, but I prefer to have my toffee separate!!  Thanks, Ronda!!! 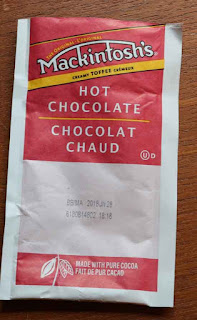 The other thing I accomplished - I got those darn photos printed for my Mom.  NO - there is no way to have them printed at another store - not yet. Now the big challenge will be to get them to the post office!!


And on that note, I'm making good progress on the day - got to keep the momentum up!