I've survived another day!  The number of days of insanity is getting fewer with each sleep - does that even make sense?

As long as progress is being made, I don't really care.  I didn't get a whole lot done yesterday in the sewing department as I was at work getting last minute paper stuff organized - labels, patterns, etc.  And in the evening, I was the guest speaker at the Port Perry Quilter's Guild.  I know what you're thinking - why did you book not one, but TWO speaking engagements so close to Market.  I don't know - but I'm booking my entire October calendar off next year!   It's not a big deal - it's just this massive project for the bags. If I didn't have that, I'd be fine!

I did my lecture on organizing and it's such good fun to give that lecture.  It's something that we can all relate to!  And what a super creative group of quilters they are.  They were showcasing their Sesquicentennial challenge.  For their theme, they were each given ONE of the trivia questions on the Northcott Sesquicentennial fabric.  What a clever idea!!! 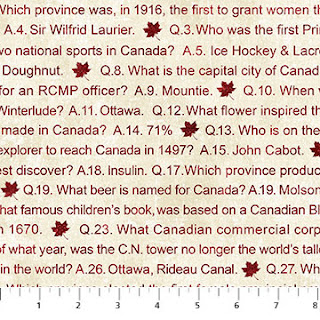 I helped to pick the winning quilts which was a VERY HARD task as there were so many good ones. Heck, they were all good. Just the fact that people came up with something so creative - that's a winning quilt!

Today I'm sequestered with my Reliable ironing board and iron and the sewing machine.  (I should have sprung for the super deluxe garment steamer!)  The bags have to be done before I go to bed tonight.  Well, mostly done.  There is a lot to be finished, not many completed.  But I can get a lot done when I'm focused!

I uploaded the pictures from my photo shoot and some of them are not half bad!  I really must learn to use my camera better.  It's a great camera, super lens, but I'm not the best with the settings.  I should make that a goal for 2018.  And then there's my "friend" Marilyn, who, without saying a word, has me almost convinced that I NEED this massive amount of technology for quilting. A wee bit of research is required before I undertake that effort.  I'll be checking it out at Market.

Guess what else happened yesterday.  Oh yes - I received one more quilt - I think it was the last one that we were to receive.  Guess what?  Oh yes - it had a sleeve, but only one half was stitched in place. I got the fun task of doing the second side. Which actually worked out OK.  I had arrived at my destination last night with some time to spare. Just happened to have hand sewing stuff in the car so I sat in the car and stitched the sleeve in place. I may now whip out this afternoon and take a picture or two.

When I was getting ready to leave for Missouri Star a couple of weeks ago, I wanted to take my little camera with me, but alas, it was nowhere to be found. I didn't even mention it because I didn't have time and I thought of what you would think of me to lose a camera and not be able to find it.  So I said nothing. Then when I was getting ready for my class this past weekend, guess what I found in the project box!  Thank goodness, this was a two-part class or it may have been a long, long time before I found that camera.  Thankfully it was the little one and not the big one. I might have panicked then!

This is the best picture I have of the quilt that I finished the other night. I cut it on Saturday (I think), pieced the six-inch blocks on Saturday night.  Sew the top together on Sunday morning, except the last border. Came home from class, sewed on that last border, made the backing and quilted it. You need to see the backing because it's kind of cool.  I'll take pictures today.

I was going to take a better picture than this, but the battery died right after this picture. I don't have a spare battery for this camera - I must get one. It's very handy!   The binding needs to be put on as my machine just didn't like my invisible thread combo.

This is a free pattern on the Northcott web site. The fabric collection is called Essence which is just gorgeous. My pattern has another colorway  - a more modern version which I think I might have to make. I'm thrilled with how it turned out.   If you check out the link, you can see the other colorway.  If you make this quilt or any of my other free stuff - send me a picture, I'd love to post it!

On that note, I can hear the iron calling my name!  I get the FUN job of fusing Decor-Bond and Fusible Fleece today.  Yeah - if you've ever worked with those products, you know that it can be a wee bit of a challenge. High heat and LOTS of steam!

Email ThisBlogThis!Share to TwitterShare to FacebookShare to Pinterest
Labels: Guild speaking, my quilts