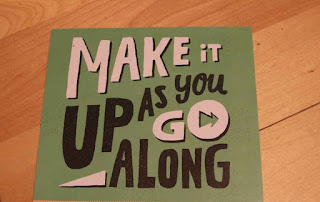 This was the saying on my calendar a couple of weeks ago.  I love it and it's very appropriate for the way I sew sometimes!  Of course depends on the project.

I was given a panel and some pieces of fabric - some yardage, some FQs, some F8s and some bits and pieces. The task was to create a small quilt.  No problem - that should be easy.

Yep - that's all the calculating I did.  I figured I would make it up as I go along!

Put the panel on the wall and then started to throw the rest of the pieces at it to see what it looked like. Actually in this next photo, I was already several steps ahead.  There was no time to take pictures!  Well, truth be told, I hadn't even thought about it.  But I knew the quilt was going to the recipient very soon after it was made so I could easily blog about it.

And then the second side went on. Let's just say that I had ZERO of that orange sashing left. I only had 1/2 yard and I had to steal a smidgen from that panel piece on the bottom.  It was slightly different, but I bet you wouldn't know when you looked at the quilt.

This is from the Northcott fabric collection called Out of This World.  The collection was released a number of years ago BUT someone in the office had a wee stash.  The good news - this collection is going to be RE - RELEASED and will be shipping to stores in DECEMBER 2017.   Check with your local shop to see if they have ordered it - if not, there may still be time!!!   The collection is super cute for the space fans amongst us and this collection GLOWS in the DARK!!  How cool is that!!!!!

You can't see in the photo below, but it really does glow in the dark!

I had to remove some of the orange borders and reassemble them.  I had put some of the borders on and then realized that I needed to put the top part on first - DUH!  So off with the orange side borders, add the top and bottom row and then put the borders back on after having to make them longer!

But then I was looking at the quilt after the top and bottom borders were on and I wasn't happy.

Well - when I fussy the border print, there was that teal color in it which is also in the planets.  I did have a 1/2 yard of the teal color, but I hadn't put it in the quilt.  That wee strip just looked out of place.

Here is a shot with one of the teal strips gone!  Looks much better.

So then I had to remove the second one and put the final orange border on. Yeah - the top is done!!! 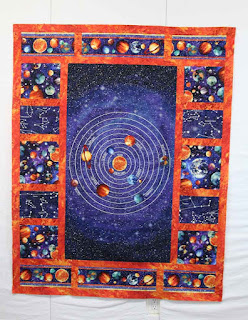 I mentioned the backing yesterday.  There was some FQ and F8 from which to make the backing.  I did have to use two different colors of the same print and the back turned out great.  There were a lot of seams in that backing and you can't see any of them because of the dark busy print.


And here is the final quilt!   It turned out great.  I quilted it with a cloud and stars pattern with blue thread!

Believe it or not, this is for a baby that isn't even born yet.  The parents are really really into all things space and when we showed the Dad this fabric - he said YES.  So space it is!  The baby is a girl!  I love it!!!   And I  made it a bit bigger than a normal baby quilt - the finished size is 45 by 60 so that the baby won't grow out of it quickly.   I think the parents were more excited (well - I only know the Dad) was way more excited about the quilt than the baby!

My kitchen cupboards are all clean and now I have to sort through all that stuff which I don't have time for. But I have until next week to get it done before the cleaning lady comes again! I'm working from home today and so in trying to be practical, I made my own tea this morning from the copious amounts of tea that I found in the cupboard.  Hmmmm - if I have a tea everyday for one year - I might finish it all off!!!   There is a LOT of tea!