No rest for those who can't schedule properly!

It was up early yesterday, had breakfast with my brother and SIL and then I hit the road. I needed to get to the airport to see if I could get on an earlier flight. It would appear that there is no such thing as standby anymore (on Air Canada), at least in the smaller airports. For a fee (of course), you can make a "same-day" change and you'll get a guaranteed seat (if available).

The flight actually left the airport 10 minutes early and we were off. Of course, we lost those 10 minutes when we arrived in Toronto, but that's OK. I think I actually like that flight time better than the one that I normally take. I arrived home around 4 PM and had time to unpack and relax. The other flight lands two hours later and the entire day is shot by then.

Got myself prepped for my class that started at 6:30 PM. Oh yes - I wasn't looking at my entire schedule the day that I booked my flight. That's why I had to get on that earlier flight. It all worked - we won't go there!

We had such a fun time at class. They were a very chatty group but everyone finished their pillowcase before the end of the class. Great fabric combinations!


It's so nice to see people digging out their sewing machines and "learning" to sew again. Two of the ladies hadn't sewed for years. It's also great to see the younger ones learning to sew. One of the girls bought a sewing machine much to her future husband's dismay. However, he changed his tune when he saw some of the stuff she has made! Awesome! He's even named her sewing machine (Taylor or would that be Tailor? and her serger is called Sergio!)  Great job everyone!!!!!   Looking forward to seeing them in a future class and maybe one day, they'll become quilters!!!

I got home to a surprise when I picked up the mail. I found not one, but TWO magazines with my projects in them.

The first one is Quilter's Connection - the Fall 2018 issue. It may not be in the stores yet. It's all about sewing with non-quilting cotton.


Here's my project - a messenger bag made from corduroy! Didn't even have to go out and buy that corduroy - it was in the stash!


You don't have to make it with corduroy - you could make it with quilting cotton if you like. It's very cute, it's not very big, but perfect for zipping around town and being totally hands-free. I want to make one for the dog park so I can put my keys, phone, and poop bags all in one spot where I won't lose them.

I have a couple of extra issues. I'm going to do a giveaway. So leave a comment by Sunday, September 9 and I'll do some random draws.

The second magazine was the September/October 2018 issue of Quilty.

That one should be in stores - I never know when they hit the newsstand as I don't always get to the newsstand on a regular basis anymore.

Here's my project.
It's like a tessalting design (sort of). Anyway - pretty cool and I had fun quilting it.

As you know, my favorite color is orange. I was in fine form yesterday for the plane with my orange running shoes and a brand new pair of bright orange pants. And yes - there's a hole in the toe of one of those fairly new running shoes. I must have a way with walking that makes my big toe stick up and poke out the end of the shoes. Very annoying since the shoes aren't old but now they look old. Although Lynn told me that holes in the toes are in style!

I'm rarely coordinated like that. As I was on the escalator leaving the airport a man commented on my matching outfit and then said - Oh and it matches the flowers in my hair! But of course!!! I've had so many comments on those flowers in my hair that I'm sticking with them. If nothing else, people will remember me. So the day I decide to do something illegal, I'd better remove the flowers or I'm in trouble!!!

Speaking of flowers on the hairband, look at this GORGEOUS handmade silk flower that Andrea made me. I LOVE it. Now I have to fashion a hair band from it. Then I can switch up my flowers.

Let's just say that it was a wee bit of a temperature change from the morning to the evening. There was frost on the ground (a very light frost) in the morning and the temperature was zero. When I got off the plane - it was something like 33 with a humidex so it felt like 43 or something ridiculous.

Feels much better this morning, but still a a bit humid. I've already hit the studio and got the binding on a quilt. I just need to sew a label on RIGHT NOW and that will be another finish for this year. I'll show you a picture of that one tomorrow.

I think I'll be having a nap this afternoon. For whatever reason, I did NOT sleep well last night at all. It wasn't the heat - just a lot of things I guess. Oh well - that's life. Some days are great, some days not so great.

OH - wait - don't forget to check out that link for the Meet and Greet bloggers. Here's the link again. 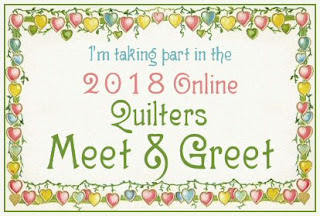 And don't forget to leave a comment if you want to be entered into the draw for the Quilter's Connection magazine.